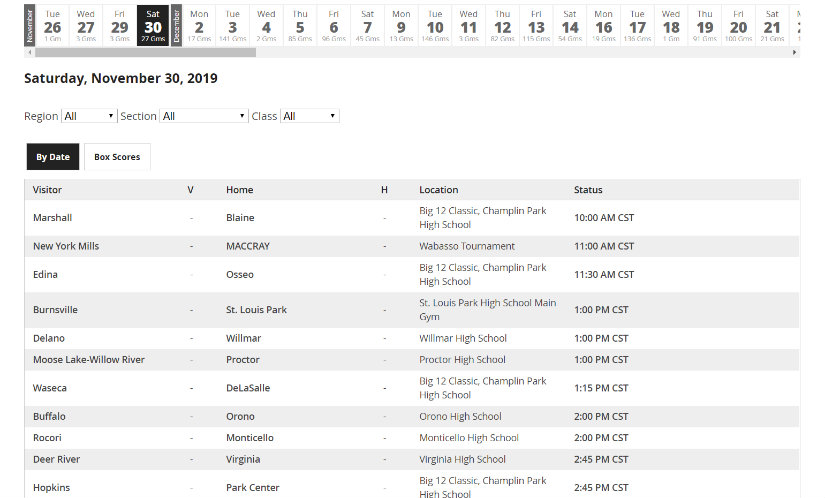 Teams participating in this year’s Big 12 Classic include DeLaSalle, which faces Waseca in a matinee matchup, and Hopkins, which collides with Park Center later in the afternoon.

DeLaSalle and Waseca faced off in the Class 3A state championship game last season, with the Islanders winning 63-56 to claim the hardware. DeLaSalle has made eight consecutive state tournaments and won seven of those tourneys, so the Islanders will likely come out swinging to show they have what it takes to extend their dynasty another season.

Like the Islanders, Hopkins is coming off a banner year, as the Royals defeated Lakeville North 55-40 to win the Class 4A state championship. Park Center also made the Class 4A state tournament last season, where the Pirates won the third-place consolation game after being eliminated by Lakeville North 47-45 in a semifinal matchup. A season-opening duel between these teams makes a good primer to see where each team stands to start the new season.

Another signature tournament takes place the following week in the west metro, as the Lindbergh Center in Hopkins hosts the annual Breakdown Tip Off Classic on Dec. 7. Thirty-two varsity teams will play as part of the showcase, with host Hopkins taking on Shakopee, which stitched together 21 regular-season wins a year ago. The showcase ends with a tilt between North St. Paul and Spring Lake Park that evening.

After the new year, playoff aspirations will take center stage, as teams slug it out for section playoff seeding, premium matchups will be played that will serve as postseason primers and conference championship banners will be claimed.

Minnehaha Academy, which has won the last three Class 2A state titles, has stacked the end of its regular season with challenging tilts, including with DeLaSalle on Feb. 22 and Minneapolis North on Feb. 27. The Redhawks triumphed 69-52 over Minneapolis North to win last year’s state championship.

State tournament action will take place from March 18 through March 21, with tourney games being played at Concordia University in St. Paul, and in Minneapolis at Williams Arena on the campus of the University of Minnesota and at Target Center, where each of the championship matchups will take place.

Click here to view the full season schedule, or go to the “Search” box at the top right corner of the page and type the name of your favorite team into “Team Finder” for that program’s specific schedule.

If your team’s schedule isn’t posted or needs updating, send the necessary information to scores@sportngin.com.