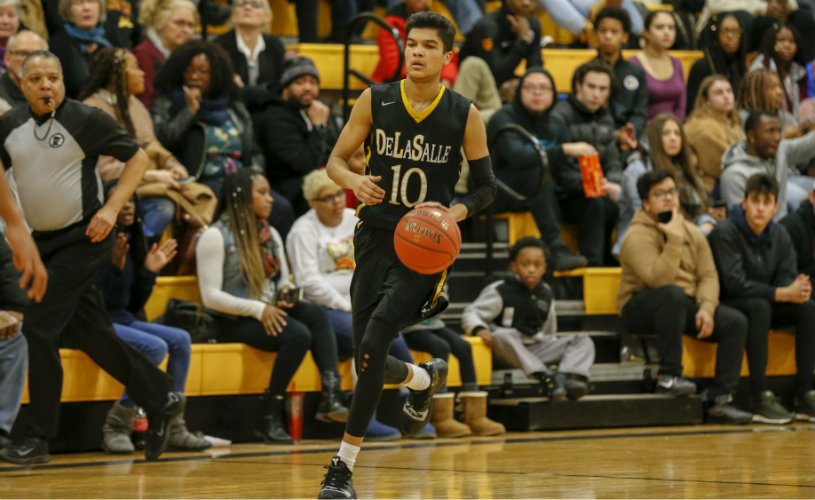 DeLaSalle's Tyrell Terry (pictured) is of the state's top seniors selected to this year's McDonald Award semifinalist list. The finalists will be announced in early March and the winner will be named shortly after. Photo by Jeff Lawler, SportsEngine

The Minnesota Basketball Coaches Association released its list of 30 semifinalists for this year’s McDonald Award earlier this week.

Only seniors are eligible to win the award, which was created last year and is meant to become the top honor a Minnesota high school basketball player can receive.

The list includes a mix of metro and outstate athletes who have excelled throughout the regular season.

DeLaSalle, the top team in the Class 3A rankings released by Minnesota Basketball News on Feb. 6, is the only school featuring multiple semifinalists, with Tyrell Terry and Jamison Battle being selected.

Terry and Battle have combined for more than 700 points this season. Terry, a 6-foot-3 guard committed to Stanford, averages 24.6 points per game, while Battle, a 6-foot-7 forward who will play for George Washington, puts up 22.2 ppg. The Islanders have lost four games this season, but have played an elite schedule and have victories over some of the state's top competition, including an eight-point win against No. 1-4A Hopkins last week.

Named after former Chisholm coach Bob McDonald, who led his boys' basketball teams to more than 1,000 victories in a career spanning 59 years, the award is patterned after the Wooden Award, which is given annually to the best male and female player in Division I college basketball.

The coaches’ association takes into account criteria such as strength of character, performance over the course of a season, contributions to team effort, and excelling offensively and defensively, when determining the winner.

The first recipient of the award was Tre Jones of Apple Valley, who was honored last April. Jones, a 6-foot-2 guard, is now in his freshman season at Duke. As a Blue Devil, Jones is playing 31 minutes per game, while averaging 8.7 points.

This season's finalists will be revealed in early March, with the winner being named later in the month or in early April.

View the table below to see who was selected.