The Rebels trailed by nine points before rallying to take a lead and then hung to defeat the Bengals. 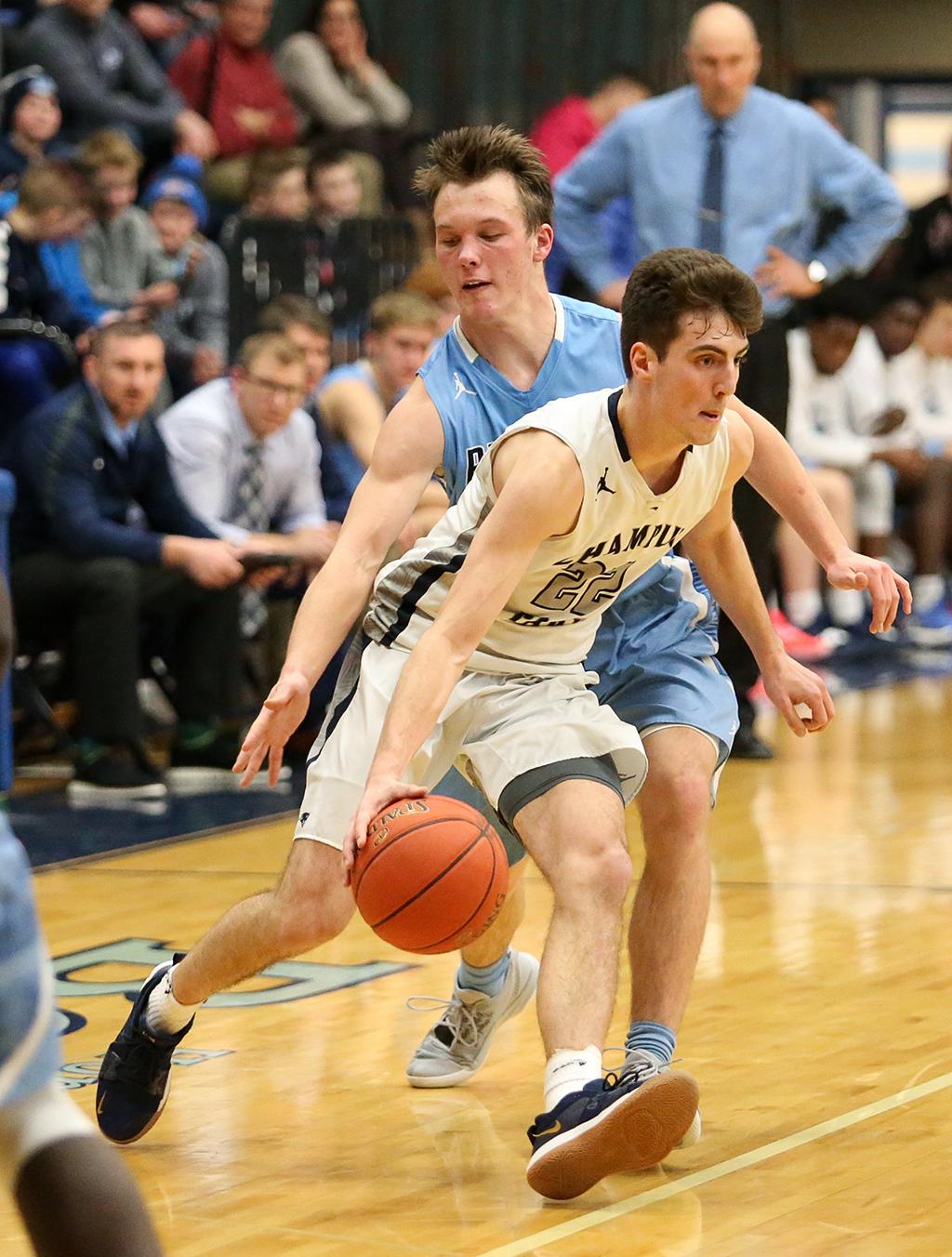 For a long while Friday, Champlin Park couldn’t seem to do anything right.

But facing a big deficit at Blaine, the Rebels stayed tough and found a way to stay in the game long enough for their woes to work themselves out. The result was a clutch Northwest Suburban Conference win to close out a stretch of back-to-back road games against tough teams 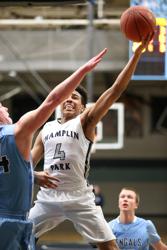 When it mattered, Champlin Park (10-4, 6-0) cleaned up its play on offense and used a stifling defense, team contributions and gritty rebounding to come back against Blaine (9-4, 4-2), which led by as many as nine in the second half.

“Proud of our boys,” Champlin Park coach Mark Tuchscherer said. “We gutted it out. We stuck with it. We didn’t play as well as we wanted to, but we played tough toward the end, got some big rebounds and made some big buckets.”

At Eden Prairie the day before, Champlin Park was tied with around 4 minutes to go, but ended up falling to the Eagles 80-67. On Friday against Blaine, the Rebels found a way to close with a win behind a full team effort.

“Overall, it was a great team win,” Rebel senior Bennett Otto said. “We shot free throws well at the end. Our bench players came and played defense, which we needed, and our bigs got some key rebounds.”

That Champlin Park found a way to do all those things when it mattered was a testament to its mental toughness. The first 32 minutes of the game were marked by the Rebels displaying poor finishing around the rim, inconsistent outside shooting, spotty performances at the free-throw line, bad turnovers and an inability to convert in transition. Then the turnaround — Champlin Park finished the game on an 18-5 run — came from shutting down the Bengals.

“I thought we played pretty solid defense,” Tuchscherer said. “The first half we played defense — our offense was not clicking, but our defense kept us in the ball game.”

Blaine started each half on a big run, but Champlin Park closed the periods hot. The Bengals had an early 13-0 run in the first half and headed into the break leading by one.

Guard Terrance Kamara finished a fast-break layup, got a steal of the inbound pass and hit a three-pointer in less than a minute’s span to tie the game 39-39.

The Bengals went back up 49-44, but Alex John’s putback gave Champlin Park a 50-49 lead with 3:57 to play, and the Rebels never trailed again. Champlin Park cleaned up its turnovers and free-throw shooting in the final two minutes to seal the win.

Blaine struggled to find good shots or lanes to drive in the final quarter of the game, and Champlin Park showed aggression on the boards to eliminate second-chance opportunities, with Kato Seley and John especially effective.

Otto, the Rebels’ leading scorer, finished with 21 points and overcame some inconsistency the first two thirds of the game to help key the comeback.

It was a big response, especially considering Champlin Park’s performances against other teams with winning records this season. It was the Rebels’ fourth win over a team that currently has a winning record, and is probably their second-best win thus far, behind a 68-62 victory over No. 8-4A Wayzata Dec. 13.

Champlin Park previously stumbled against No. 2-4A Hopkins, No. 1-2A Minnehaha Academy, Osseo and No. 9-4A Eden Prairie.

There certainly would have been legitimate reasons for the Rebels to crumble, playing their second quality opponent in as many days, in another rough-and-tumble matchup. Instead, they found a way.

“I think after playing a really tough team last night, physical team, then you come in and play a very strong, physical team again, you can get worn down,” Tuchscherer said. “The trick is not to let your mind go with it.” 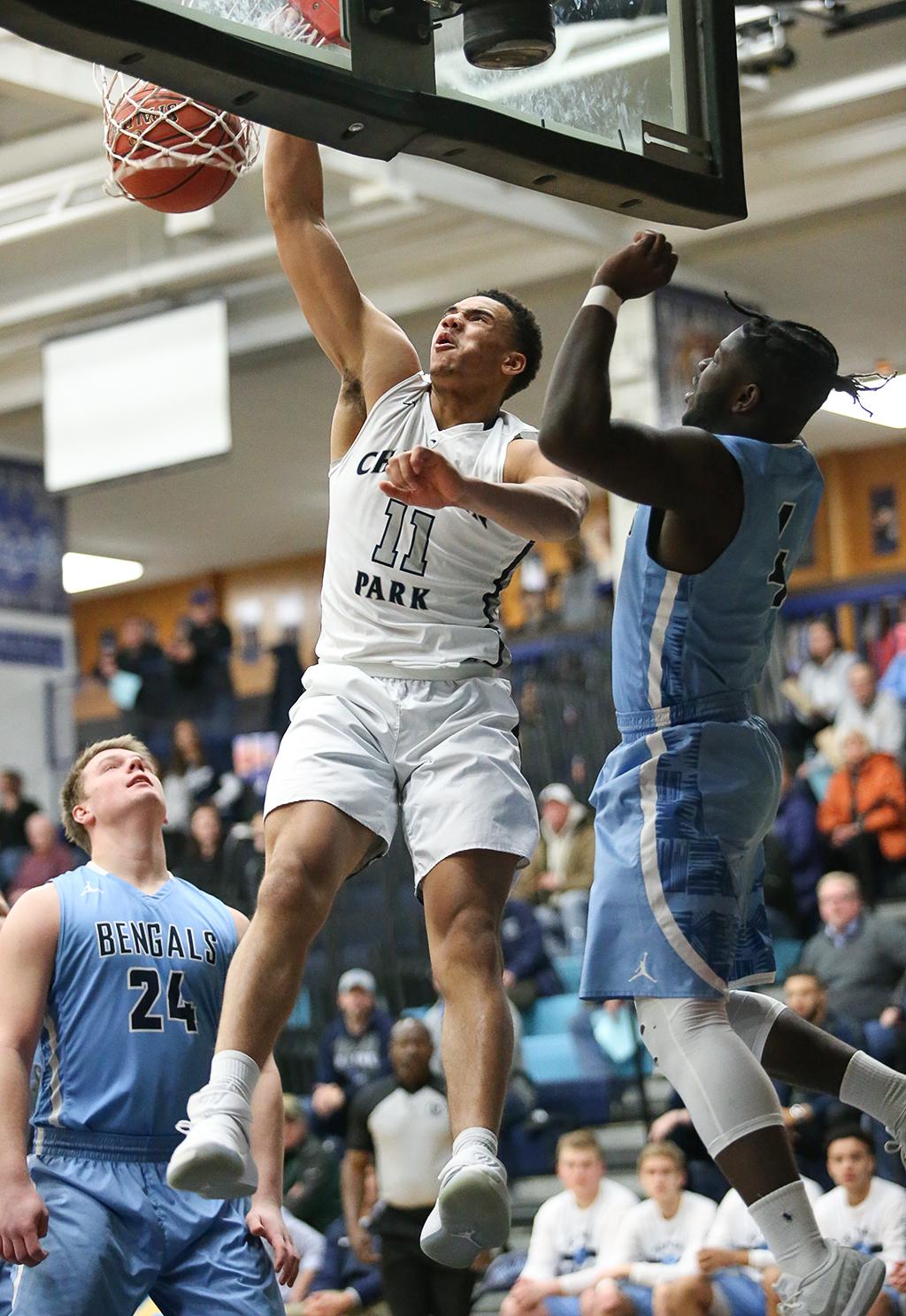 The leader of the Northwest Suburban Conference North division held onto its first-place standing Friday, as Champlin Park earned a 62-54 road win over Blaine.

Playing the second night in a back-to-back, the Rebels (10-4, 6-0) needed to come back from an early deficit to get the win. The Bengals (9-4, 4-2) couldn’t hold onto what became a nine-point lead in the second half.

Down 39-30 at one point in the second, the Rebels rallied and an Alex John putback with 3:57 on the clock put Champlin Park ahead 50-49 — a lead they wouldn’t relinquish. John finished with 10 points and eight rebounds.

Champlin Park scored the first six points of the game, but Blaine went on a 13-0 run after and led the rest of the half. The Bengals led 26-25 at the break. 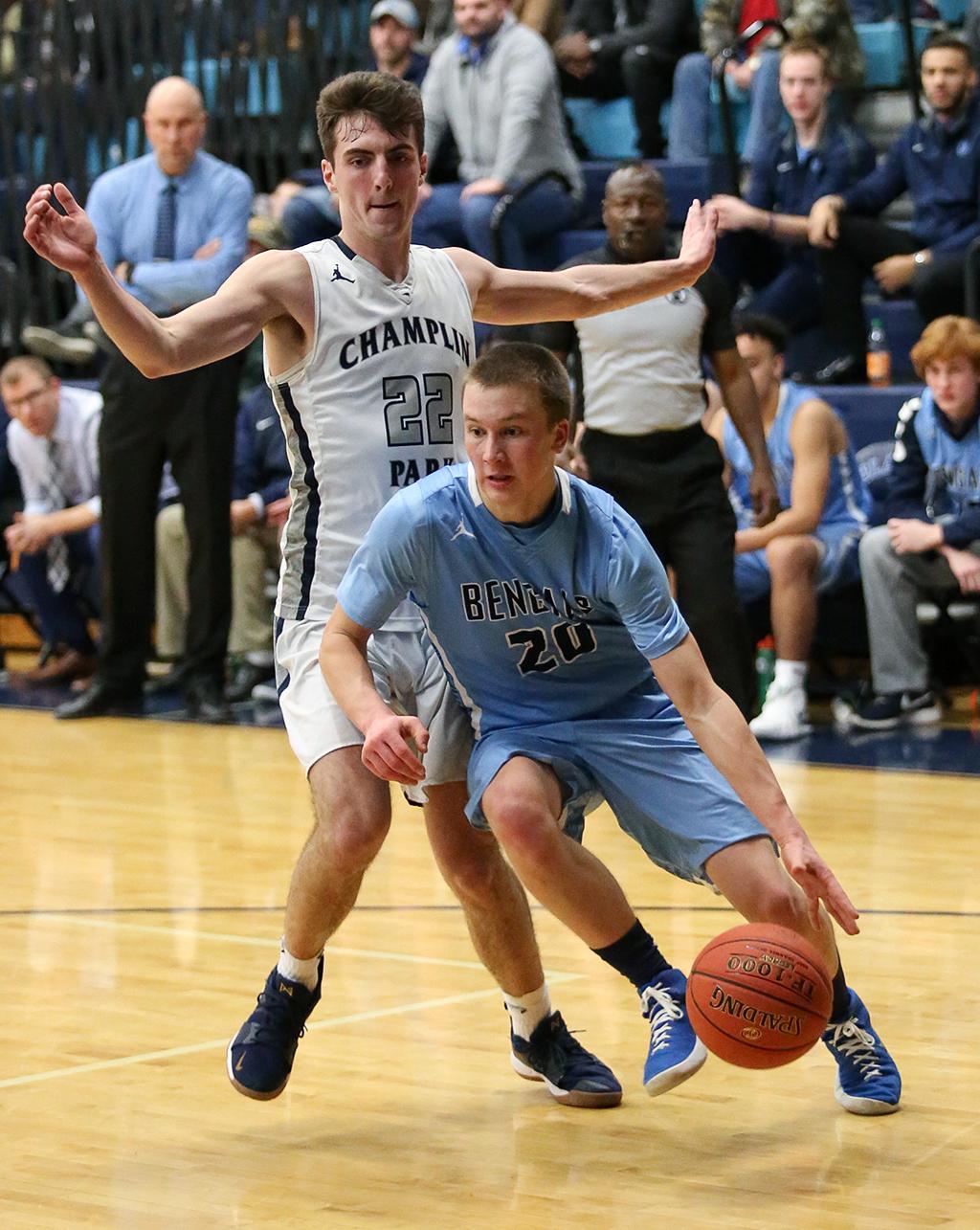 Senior guard Lucas Larson (20) led scoring for the Bengals with 18 points. Blaine held a lead until late the second half, but ultimately fell to Champlin Park 62-54. Photo by Cheryl Myers, SportsEngine