The sports-minded school, with 21 athletes in its first year, is part of a growing trend that flips the traditional high school approach in seeking to get exposure for their basketball talents. 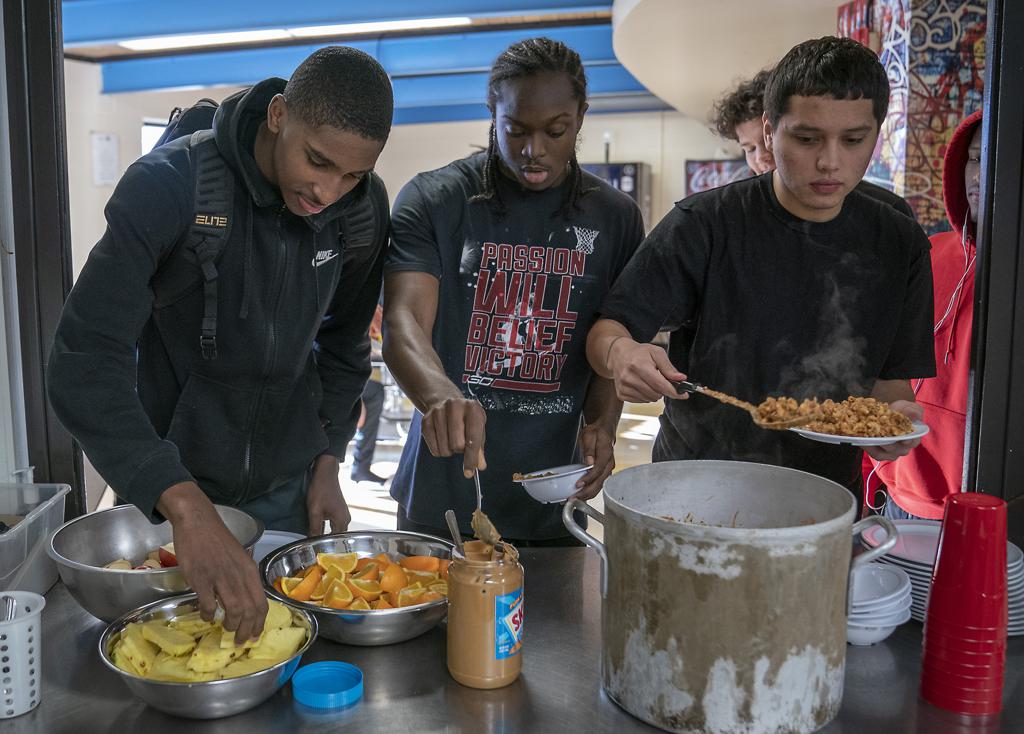 The walkways around the Jerry Gamble Boys and Girls Club in north Minneapolis are a little less quiet during the mornings these days.

The club doesn’t officially open until 2 p.m., when it serves as a de facto community center. But there is morning life going on within its walls.

Since September, the club has housed Minnesota Preparatory Academy — Minnesota Prep for short — in its first year as part of a growing trend of privately run schools that flip the traditional school-sports model into one in which a sport is the centerpiece.

Twenty-one young men spend the early parts of their day hunched over laptops in the makeshift computer lab, attending to online-based schoolwork. When it’s done, they make a beeline to the club’s two gymnasiums. The sound of thumping balls on gym floors and shots ripping through nets contrasts with the more subdued hum of earlier in the day. 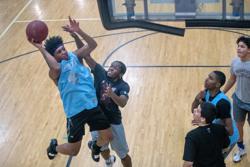 Minnesota Prep students practiced Jan. 9 in a gym at the Jerry Gamble Boys and Girls Club,

“It’s a chance for me to work on my game and take it to the next level,” said Lu’Cye Patterson, who would have been a junior at Brooklyn Center High School this season. “I thought this would be the best way.”

The school is divided into a high school and a post-graduate school. There are 10 high school players and 11 post-grad. While many are from Minnesota — four from Brooklyn Center alone — they hail from around the country.

“We’ve got kids from Nevada all the way to New York,” said co-founder Donnell Bratton, who is also the pastor at Overcomers Victory Church in St. Paul. “Kansas City, Las Vegas, Oklahoma. We haven’t got as many from Minnesota because we’re still getting the word out.”

Minnesota Prep is the brainchild of Lu’Cye’s father, Lucas Patterson, a Minneapolis native and former player at Cooper High School and Augsburg University. He was an assistant coach at Brooklyn Center for two years and runs an AAU basketball program called Minneapolis FAB (Future Academic Ballers). The prep school sprung out of his AAU experience.

“In AAU, basketball is pretty much a showcase for players,” Patterson said. “I thought this was a great opportunity, a platform to get the word out about some of our kids.”

Minnesota Prep and 31 other preparatory academies comprise The Grind Session, which provides a framework for the structure of prep schools as well as puts together, sponsors and publicizes tournaments.

Growing numbers of players, hoping to get collegiate opportunities by playing against higher-level competition than they can get in traditional high schools, are taking the prep school route.In recent years, Cooper’s Rashad Vaughn and Apple Valley’s Gary Trent Jr. both left their high schools before their senior years to play for prep schools. This season, Blaise Beauchamp of Hopkins and Terry Lockett of Minnehaha Academy have done the same. 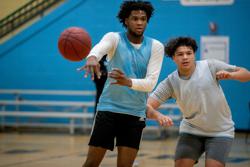 “The competition is at another level,” said junior point guard Rudy Tahir, one of the four players who migrated from Brooklyn Center after helping the Centaurs reach the Class 2A state tournament semifinals last March. “My basketball is much better.”

Through the first two months of its season, the Minnesota Prephas won eight of 14 games while playing against some of the top prep players in the nation. The players see the competition as a measuring stick.

“That’s the best part, playing on the same court as some of the best players in the country, like Kyree Walker and Lamelo Ball, players like that” said Lu’Cye Patterson, who leads the team in scoring at about 25 points per game.

Minneapolis North coach Larry McKenzie, who is as plugged into the high school basketball scene as any coach, acknowledges that the prep school avenue has advantages for some players.

As expected, there are myriad issues that Minnesota Prep faces. Tuition is $12,500 a year, which increases to $16,500 if room and board is required. Those from outside the metro area generally live with host families Many of the athletes get school-provided financial relief to attend, making funding a priority. 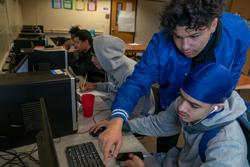 Bratton said the school’s operating budget is estimated to be about $1.5 million for three years. It goes toward everything from laptops for the players to facility rental fees to covering travel expenses to outside tournaments.

“That’s a projected budget,” he said. “We’ve got a couple of grants and some partners, but we’re looking for more investors to invest into our young people.” He said the school is financially set through 2021.

The school’s educational platform is administered by Minnesota Connections Academy, an accredited online public school. Nearly all schooling is done online. Bratton and Patterson monitor the progress made by students, with an eye toward meeting NCAA eligibility requirements.

Housed in the youth center, the school lacks the daily social interaction that most high school students take for granted. No school dances, no proms nor mascots nor school bands, and no place to play home games. Minnesota Prep has played just one game in Minnesota this season, at Minneapolis Henry in November.

“It’s basically a job,” McKenzie said. “We tell our kids that high school is the highlight of their lives. These kids are missing out on the friends and the benefits of high school, the socialization that goes along with it.”

Lu’Cye Patterson says that leaving Brooklyn Center was the hardest part of his decision to attend a prep school.

“I miss the environment and all the love I got there,” he said. “But what I really want to do is get to the next level. I’m focused here. There’s nobody here to distract me. This is what I want to do.”

In losing four of his top players from the team that went to the semifinals of the MSHSL Class 2A state tournament last year — Patterson, Tahir, Adreone Sprinkles and Amahn Decker — Brooklyn Center coach Matthew McCollister has had to reconfigure a team he once thought had a shot at a state championship this season.

“I don’t wish ill will on these kids, because I love them,” he said. “I just think it’s a myth about the exposure. We’ve got a great high school league here and great AAU programs. We’ve got local kids going to places like Duke and Kentucky and Colorado. Then I see the [Minnesota Prep] games and they’re playing in front of empty gyms. I think they getting sold on a dream of exposure and scholarships that might not be there.”

Said McKenzie, “It works for the top five percent of the kids, but it doesn’t seem to work as well for the majority,”

Patterson and Bratton say they understand the skepticism. And they acknowledge the difficult path they’ve embarked upon.

“I have the utmost respect for Brooklyn Center,” Lucas Patterson said. “It’s been challenging, it’s been special. I’m awed by the whole situation.” 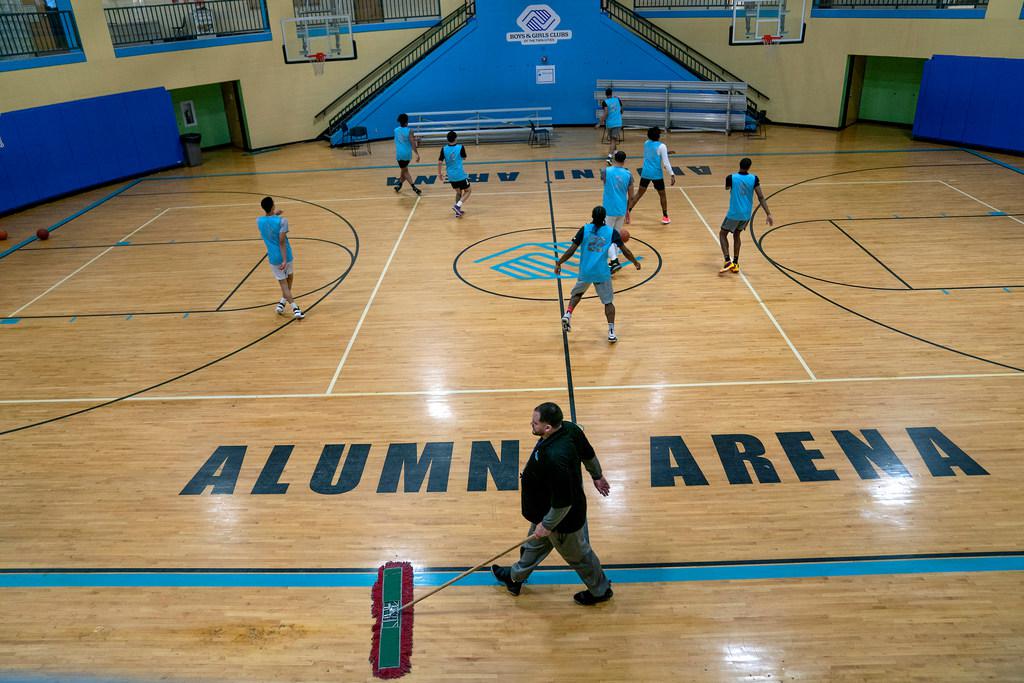 Minnesota Prep Academy founder Lucas Patterson swept the gym floor as players warmed up for practice on Jan. 9 at the Jerry Gamble Boys and Girls Club in north Minneapolis.

Four who left high school to play at a prep school

Gary Trent Jr., Apple Valley, 2016
• Left after his junion season, enrolled at Findlay Prep, then transferred to Prolific Prep in California. Played one season at Duke.
• Drafted 37th overall by Sacramento in 2018 NBA draft, then traded to Portland.
• Currently on the Portland roster.