The season tips off on Nov. 29 with a slate of 29 games being played that day. 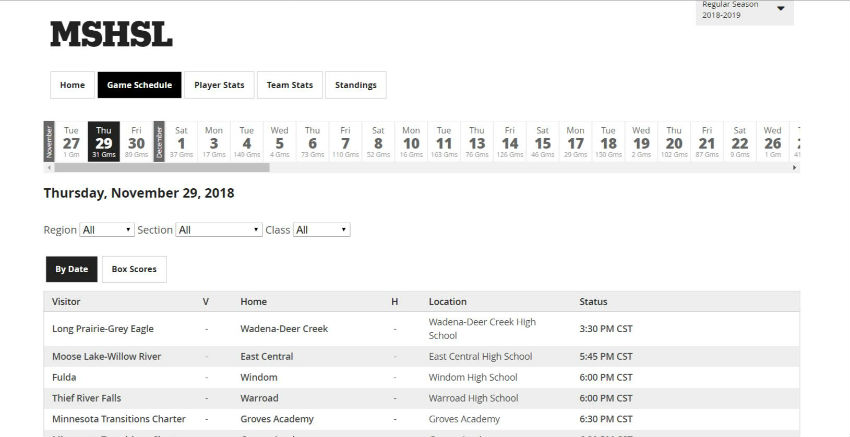 Once Cretin-Derham Hall slipped past Apple Valley with a dramatic dunk from 6-foot-10 Gopher-bound Daniel Oturu to claim a 79-78 victory in the Class 4A final at Target Center last March, the countdown began to what should be another thrilling boys’ basketball season in Minnesota. The wait ends on Nov. 29, with 29 games being played that day.

Brooklyn Center, which lost the Class 2A third-place game 75-70 to St. Cloud Cathedral last season, begins its 2018-19 campaign against Holy Family Catholic on opening day. The Fire went 17-9 in the regular season a year ago but were eliminated in the second round of the Class 2A, Section 5 playoffs. The Fire would like to start their year with a win against a top competitor while the Centaurs eye a return to the state tourney.

Things really begin to heat up on Tuesday, Dec. 4 when two metro teams with pedigree meet in a high-stakes matchup, headlining a slate of over 140 games. Hopkins will host Orono, a squad that went 21-5 in the regular season a year ago but had its campaign cut short after falling to one of Class 3A’s regular favorites, DeLaSalle, 80-78 in the Section 6 playoffs last March. The Royals, meanwhile, went 25-1 in the regular season but were upset by Wayzata 63-61 in the Class 4A, Section 6 playoffs. Hopkins aims to return to state after being absent the last two years. The Royals made the tournament in 2014, 2015 and 2016, when they won the state title.

On Saturday, Dec. 8 The Breakdown will host its annual Tip Off Classic at the Lindbergh Center in Hopkins. 32 teams will take the floor that day, including Wayzata which faces DeLaSalle. The Islanders have made seven straight Class 3A state tournament appearances and the Trojans would like to prove last year wasn’t a fluke when they slipped past Hopkins to make the Class 4A tournament.

The final game of the Tip Off Classic will be played between Champlin Park and Minnehaha Academy. The Rebels went 21-5 during the 2017-18 regular season and made an early exit in the Class 4A, Section 5 tournament after losing to Osseo 56-54 in the second round. Minnehaha Academy, meanwhile, won the last two Class 2A state titles and features Jalen Suggs, who averaged 23.7 points per game and 6.3 rebounds per game as a sophomore in last year’s tourney en route to the championship.

Looking ahead to the new year, Virginia has a date with North Woods on Valentine’s Day. The Blue Devils were the only team to beat North Woods, last winter’s Class 1A runner-up, in the regular season a year ago. After losing last February's matchup 77-54, the Grizzlies will be looking for more than chocolates and flowers this time.

Also in February, conference races will heat to a boil and the top programs will use games as tune-ups for the section playoffs, including on Feb. 19 when Lakeville North clashes with Apple Valley, a team that beat the Panthers 63-50 in South Suburban Conference play last February. Lakeville North defeated Eden Prairie 63-52 in last year’s Class 4A state tournament third-place game while Apple Valley looks for sustained success despite graduating star player Tre Jones who now plays for Duke.

Minneapolis North, which made the jump to Class 2A a year ago and put up a 23-win season despite playing against many of the state’s best, regardless of class distinction, lost steam in the Section 5 playoffs as it lost 81-75 to Brooklyn Center. The Polars play Eden Prairie in the final game of the regular season, which should be a useful test on the eve of section play. Last year, the Eagles, a Class 4A state tournament participant, beat the Polars 69-57.

To see the full schedule, click here, or go to the “Search” box in the top right corner of the page and type the name of your favorite squad into “Team Finder” for that team’s specific schedule. If your team’s schedule isn’t posted or needs updating, send the necessary information to scores@sportsengine.com.