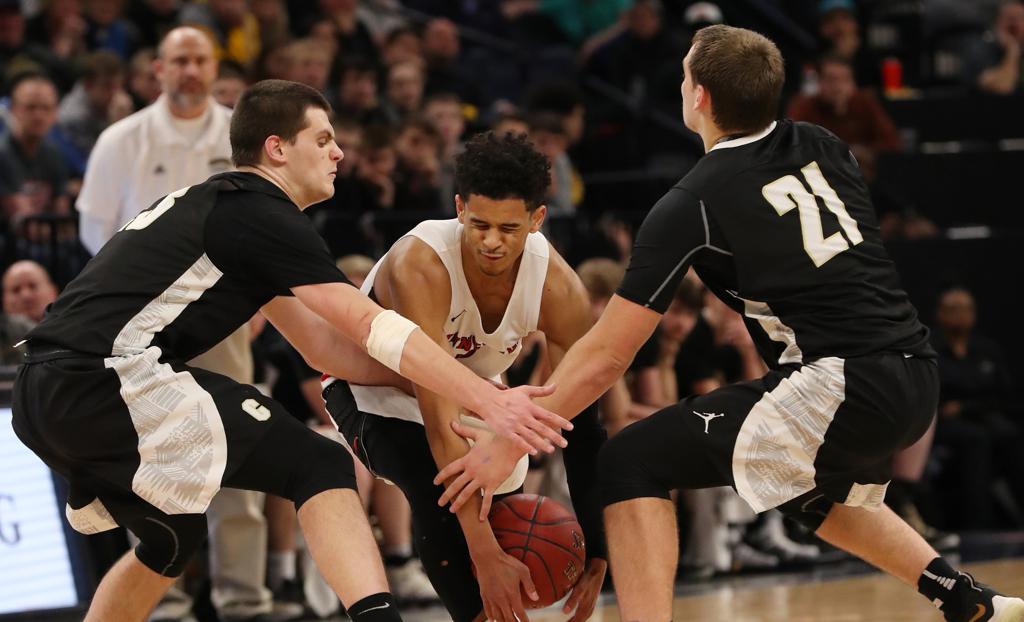 But, when asked about not winning a state championship in basketball, King, a Mr. Basketball finalist, had trouble getting the words out.

“There’s definitely a hole,” said King, whose father, Brad, is the Caledonia head basketball coach and whose younger brothers Noah and Eli are starters, too. “I’m trying to enjoy this last ride. I’m going to miss playing with my brothers and miss playing for my dad.”

King has signed to play basketball at Division I South Dakota St.

‘No 13-point shot’ needed by Delano

He kept the comeback script simple, with a touch of humor to keep the boys light.

Unseeded Delano took manageable bites during a 16-4 run that turned the game’s momentum. The Tigers — players nicknamed themselves “Hoosier Squad” in honor of their scrappy, six-man rotation — went ahead to stay at 50-48 on a Keegan O’Neill basket off an inbound play.

On target at Target

It’s understandable if Minnehaha Academy, a team without a permanent home gym, considers Target Center as kind of its home away from home.

The Redhawks have had a lot of success at the Timberwolves home arena. They won three games in a row there en route to the Class 2A state championship.

Russell-Tyler-Ruthton’s first two Class 1A championships (2004 and 2005) came when Section 3 had a near stranglehold on the title tilt.

The section had an 11-year run (1999-2009) when it produced eight champions and three runners-up. Coach Ted Kern’s squad became the first team from the section to reach the final in five years.

“I don’t think the section ever left,” Kern said after the Knights’ 59-55 victory over North Woods in the Class 1A final. “We just took a hiatus.”

Don’t expect another five-year window between appearances in the near future.

“We have some quality teams,” Kern said. “Any team that comes out of Section 3 will be battle-tested.”