The Hylanders made two free throws in the closing seconds and then Quentin Hardict stole the ball on the ensuing inbounds pass to preserve the game. 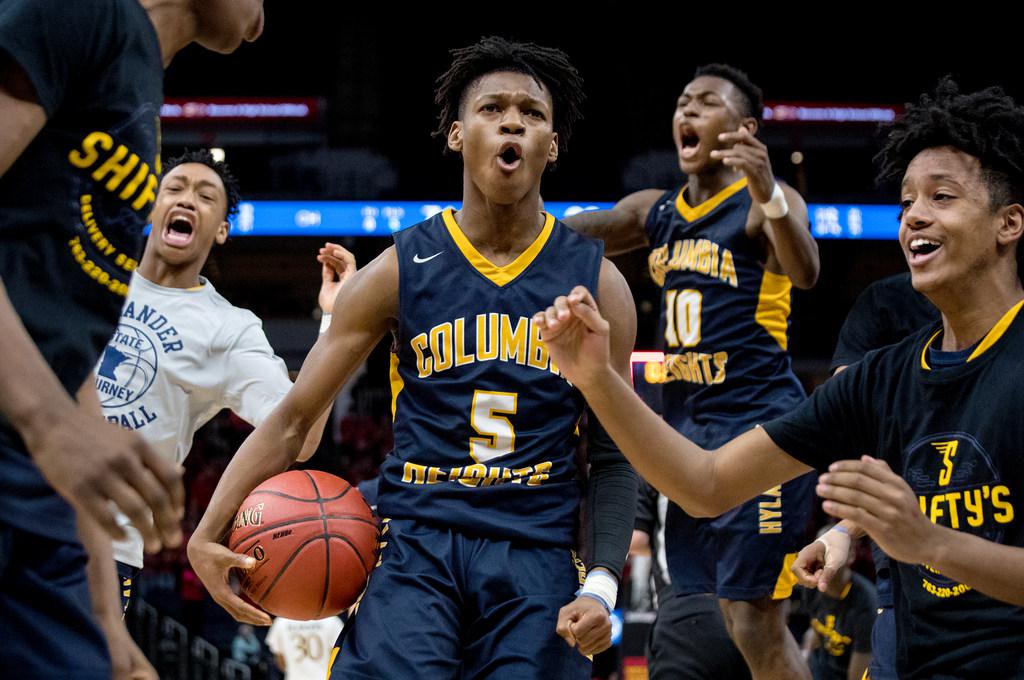 Christian Kelly envisioned being in a gym, all by himself. He wanted to block out the boisterous crowd noise.

The Columbia Heights senior forward strolled to the free-throw line with 6.1 seconds left and calmly made two free throws to give the Hylanders a 71-69 upset victory over the six-time state champion and No. 1-ranked DeLaSalle in the Class 3A semifinals Thursday at Target Center.

“I knew if I missed those free throws everybody would chew me out,” said Kelly, one of five Hylanders (22-6) in double figures with 11 points, including 3-for-3 from the charity stripe.

After a Columbia Heights timeout, senior guard Quentin Hardict stole DeLaSalle’s inbounds pass with 5 seconds left. Holding the basketball as he lay on the floor, he looked up at the clock and watched the final seconds tick off, touching off a wild celebration.

“I’ve been losing to this team since my freshman season,” said Hardict, who had 15 points, seven rebounds, seven assists and three steals. “This was my last chance to beat them.”

DeLaSalle junior guard Tyrell Terry’s three-pointer from above the top of the key tie the score at 69-all with 29 seconds left. Terry led the Islanders (25-5) with a game-high 24 points and four assists. Gopher recruit Gabe Kalscheur was held to 12 points on 5-for-17 shooting, 2-for-10 from three-point range.

“They killed us with offensive rebounds,” DeLaSalle coach Travis Bledsoe said. “We couldn’t keep them off the glass. They were relentless.”

Senior center Wendell Matthews paced the Hylanders with 20 points, with 16 in the second half. His back-to-back three-point plays after offensive rebounds tied it at 51-all. The biggest lead the rest of the way for either team was three points.

“We wanted our players to compete,” said Columbia Heights coach Willie Braziel, whose team lost to DeLaSalle twice during the regular season, 94-58 and 82-67. “I thought we were good and being overlooked.”

That won’t be the case any longer.

“I had to fight back the tears at the end. It was very emotional,” Braziel said. “There’s not a more satisfying win than beating the machine.”