The top-seeded Raiders come into Class 4A tourney with crowd-pleasing flamboyance. 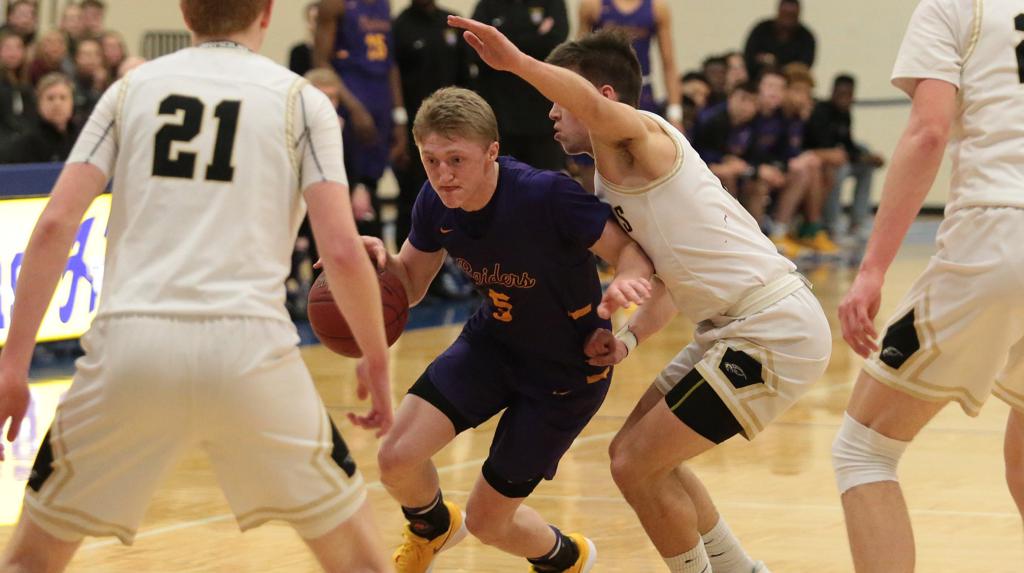 A family move precipitated his transfer from Braham, a small-school basketball hotbed north of the Twin Cities, to Cretin-Derham Hall before the start of his junior year. Quick and possessing a crossover dribble that turns legs to noodles, the 5-11 point guard had the skills needed to run the offense for the athletic Raiders, who take the Target Center court Wednesday in the Class 4A bracket of the boys’ basketball state tournament.

All he needed was to believe he could do it.

“I didn’t really know what I was getting myself into, but I knew what I wanted it to be,” Larson said.

With a small-town background, he was hesitant about asserting himself at a bigger school. After all, he was the new guy.

“The coaches brought me into the office and it was like ‘You’re going to have to be a better leader or it’s not going to go how we want.’ From that point on, I had to be more vocal and really help the guys out.”

Now a senior, Larson has become the conductor who orchestrates Cretin-Derham Hall’s up-tempo, rim-rocking attack. He averages just over 10 assists per game, feeding lobs to future Gopher Daniel Oturu for monster dunks. Or dishing to Sy Chatman for soaring drives through the lane, or kicking the ball out for three-pointers from specialist Jaeden King, who has exceptional range.

“That’s the big thing for a point guard,” Larson said. “Keep everyone happy and get them the best shots possible.”

If those other options aren’t available, he’ll occasionally race past his defender for a layup at the rim.

“He doesn’t surprise me at all,” Oturu said. “He can play at a high level. He loves to share the ball and that has made us all happy and better as a team.”

It’s all part of Cretin-Derham Hall’s “Showtime Raiders” persona, a moniker coined by Oturu. The Raiders (27-2), who play with crowd-pleasing flair, finished the regular season ranked No. 1 in the Class 4A rankings and earned the No. 1 seed in the big-school tournament.

Raiders coach Jerry Kline understands such a nickname could be interpreted as cockiness, but it has its advantages.

“Some people might be thinking that this “Showtime” thing is arrogance, but what? They watched the Lakers, they watched the [ESPN] ‘30-for-30s,’ they saw the intensity. There are worse things they can be doing,” Kline said. “It motivates them. And that’s not a bad thing, not for this team.”

Case in point is Chatman, a lanky 6-8 wing and perhaps the Raiders’ most improved player. He has doubled his average this season, from 9.4 points last year to 18.1 this season.

“It’s a confidence piece for me,” Chatman said. “Last year, I didn’t have the much confidence in myself and my ability. This year, playing with Ryan and Daniel has helped me become a way better player.”

On the rare times when the Raiders aren’t playing well, invoking their nickname inevitably provides a boost.

“Sometimes we’ll be in the huddle and we’ll say “We’ve got to start playing ‘Showtime Raiders’ basketball,” Chatman said. “We’re a high-energy team that likes to show people ‘Showtime.’ ”

Last year, with an identical starting lineup to this season, they led eventual champion Apple Valley for the 26 minutes in the quarterfinals. Then they allowed the Eagles to go on a 21-3 second-half run and lost 76-66.

The memory of that collapse still aggravates.

“We’ve used that as motivation all year,” Oturu said. “Motivation to get better. And to keep growing each day.”

That attitude, even more than their “Showtime” image, is what Kline likes to hear.

“A great example is Daniel. He doesn’t care if he scores five points or 25, he just wants the ‘W’,” Kline said. “That is the type of unselfish behavior we have. This squad has a lot of talent, no question, but they like each other, they play well together and they always do what’s best for the team.”

“That’s the culture we’ve made,” Larson said. “Everyone on this team has a good feeling. We’re just excited to get going.”

1. Can the Eagles repeat?

Apple Valley has played in three championship games since 2013 and has won them all. In 2015 and 2017, they took down Champlin Park teams that were undefeated before the finals. No player in the tournament elevates the play of his teammates more than Tre Jones, whose work ethic and off-the-chart basketball IQ make up for most Apple Valley shortcomings. The Eagles’ top eight players are all seniors and have been playing together since their youth traveling team days. Don’t bet against Apple Valley in big games.

All season Cretin-Derham Hall has been considered one of the favorites to win the Class 4A title thanks to a lineup that checks all of the boxes — size, athleticism, rebounding, outside shooting. Heady point guard in Ryan Larson conducts the entire high-flying production, which power forward Daniel Oturu dubbed the “Showtime Raiders.” They play with crowd-pleasing flash. Expect a half-dozen highlight reel plays every time they take the court.

3. Is this Eden Prairie’s time?

When Eden Prairie’s name is mentioned, it’s often followed by a qualifier, such as “might be a year away.” Despite a starting lineup of four sophomores — with two key seniors for stability — the Eagles certainly belong. Underclassmen Austin Andrews, Connor Christensen, Drake Dobbs and John Henry all average in double figures. They’ve posted victories over such tourney teams as Cretin-Derham Hall, Wayzata, DeLaSalle and Minnehaha Academy. These guys are ready now.

The focus is on the players, of course, but the bracket boasts a who’s who of the metro’s best coaches. Lakeville North’s John Oxton, Osseo’s Tim Theisen, Eden Prairie’s David Flom, Apple Valley’s Zach Goring, Maple Grove’s Nick Schroeder, Wayzata’s Bryan Schnettler, Cretin-Derham Hall’s Jerry Kline and Forest Lake’s Dan Cremisino make up a stellar lineup of bench bosses. Expect every team in this field to be disciplined and well-prepared.