The Eagles, trailing by 10 points in the second half, rallied to a 67-60 victory over the upset-minded Rangers. 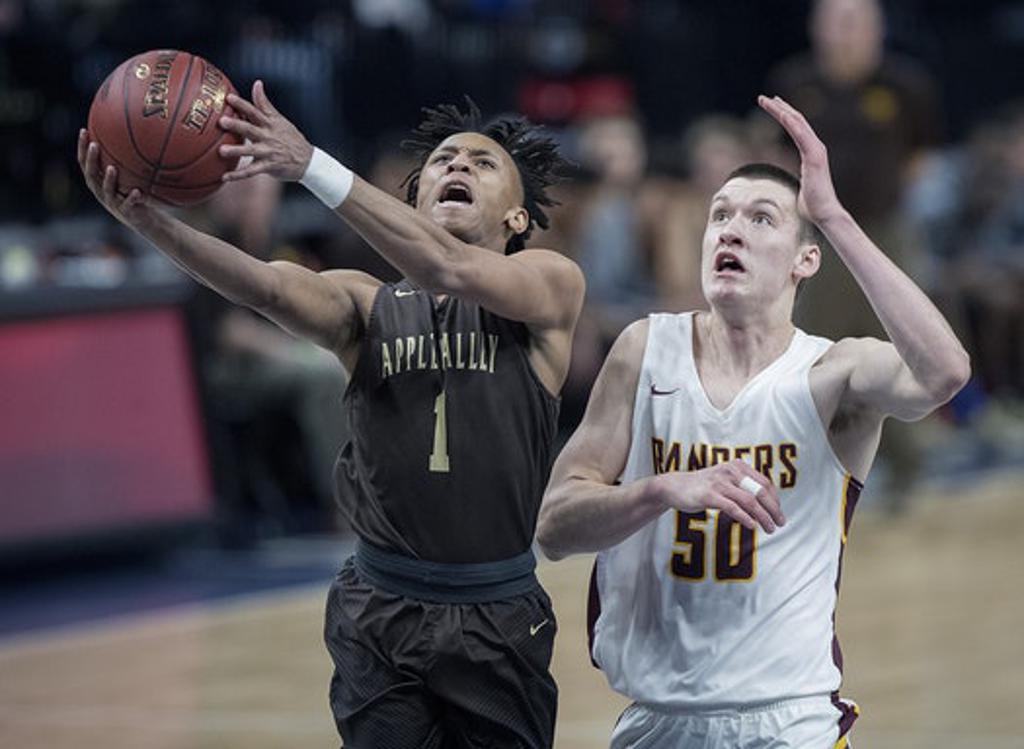 Apple Valley's Nathan Mach tried to score above Forest Lake's Zach Halley in the first half of the Class 4A quarterfinals Wednesday at Target Center. Photo: ELIZABETH FLORES • liz.flores@startribune.com

Tre Jones wasn’t worried, but he might have been the only one in Target Center who could say that. His Apple Valley team trailed Forest Lake by 10 points six minutes into the second half. An upset appeared to be brewing. 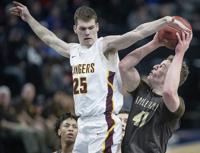 Apple Valley’s wobbly start Wednesday wasn’t a surprise, at least not from a state tournament standpoint. In three of their last four state tournament appearances, the Eagles have struggled early in the quarterfinals. Last season, the Eagles trailed Cretin-Derham Hall by 12 in the second half before rallying for victory.

“Hopefully, we’re over the jitters now and we can play more consistently in the next game,” Apple Valley coach Zach Goring said.

Forest Lake (19-11) may have gone into the game as decided underdogs, but the Rangers weren’t about to be intimidated. Playing an unconventional 1-3-1 zone, they built a 34-28 halftime lead.

“We told the guys from the beginning of the week of practice that we were going to give them a game,” Forest Lake forward Cooper Berg said.

Apple Valley’s rally began with its press. The Eagles went on a 10-1 run to cut the deficit to a single point. They finally regained the lead on six straight points from guard Luke Martens and pulled away minutes, making eight straight free throws in the final minute.

Defending champion Apple Valley survived a scare from unseeded Forest Lake, rallying from a 10-point second-half deficit to beat the Rangers 67-60 in the Class 4A quarterfinals.

Forest Lake took advantage of poor shooting from the No. 2-seeded Eagles and built a 45-35 lead midway through the second half Wednesday at Target Center. Apple Valley began to press and went on a 10-1 run to work itself back into the game.

Click to watch the live stream of this game at Prep Spotlight TV.