Connor Christensen had 22 points, including four three-pointers, in leading the quicker Eagles to a 65-38 victory. 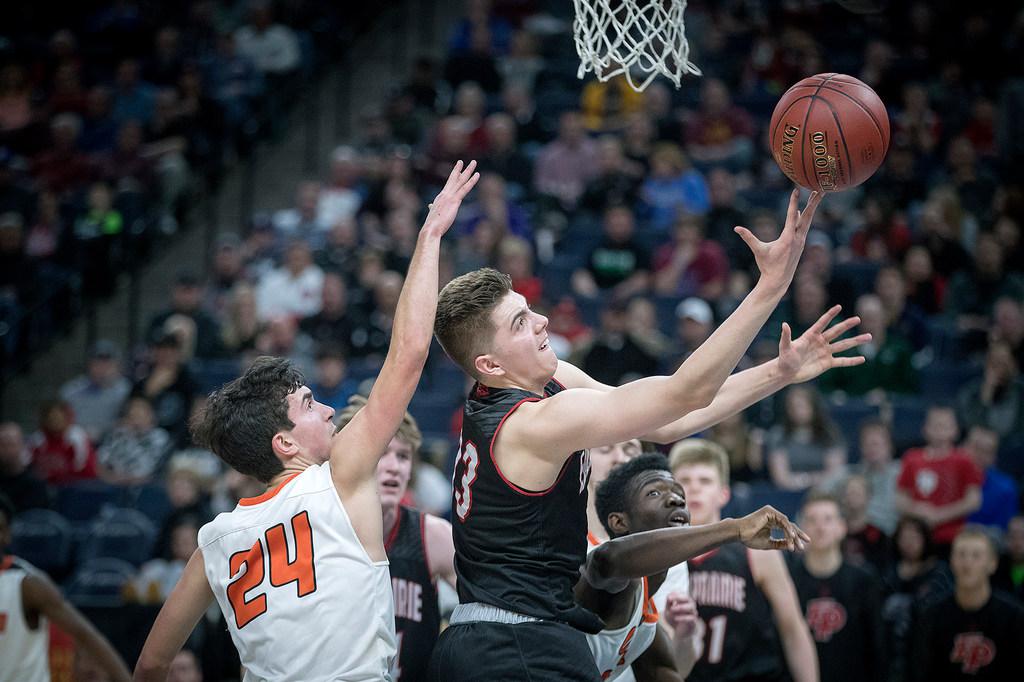 Eden Prairie's Austin Andrews (right) and Osseo's Zach Theisen battled under the basket in the second half in a Class 4A quarterfinal game Wednesday at Target Center. Photo: ELIZABETH FLORES • liz.flores@startribune.com

Eden Prairie scored the first seven points of the game and rode that spark to a 65-38 victory over Osseo in the Class 4A quarterfinals.

“We made it an emphasis that the first five minutes of the game were going to be critical,” Eden Prairie coach David Flom said. “We thought it would be a tough grind. One exception was if we got out to a really good start.”

Playing with a lineup loaded with sophomores and buttressed by two experienced seniors, Eden Prairie was the aggressor from the outset Wednesday at Target Center. The Eagles won the races to loose balls, controlled the boards and worked for open shots both inside and out.

“We ran into a buzzsaw,” Osseo coach Tim Theisen said. “Credit EP. They might have four sophomores out there, but they play like seniors. They’re wise beyond their years.”

Eden Prairie took control with its outside shooting in the first half. The Eagles hit six of 11 three-point attempts, four of them by guard Connor Christensen, to take a 33-18 halftime lead.

“We just try to bring energy every day,” said Christensen, who finished with 22 points and 11 rebounds. “Our seniors leaders really lead us and the sophomores step up at times. It’s a really collective group and we feed off each other.”

Eden Prairie’s energy was evident in the box score. The Eagles shot 56.5 percent from the floor (26 of 46), outrebounded Osseo 36-22 and dished out 13 assists to just four for the Orioles.

“There was a sense of urgency on their part,” Theisen said. “We were a step slow, a step out of position, and Eden Prairie capitalized on that.”

Eden Prairie used strong outside shooting and an aggressive approach on the boards to defeat Osseo 65-38 in the Class 4A quarterfinals Wednesday at Target Center.

Zach Theisen and Cornell Richardson scored 10 points each for Osseo (23-7).

Click to watch the live stream of this game at Prep Spotlight TV.