Greg Miller coached basketball for 33 years, piling up many memories. 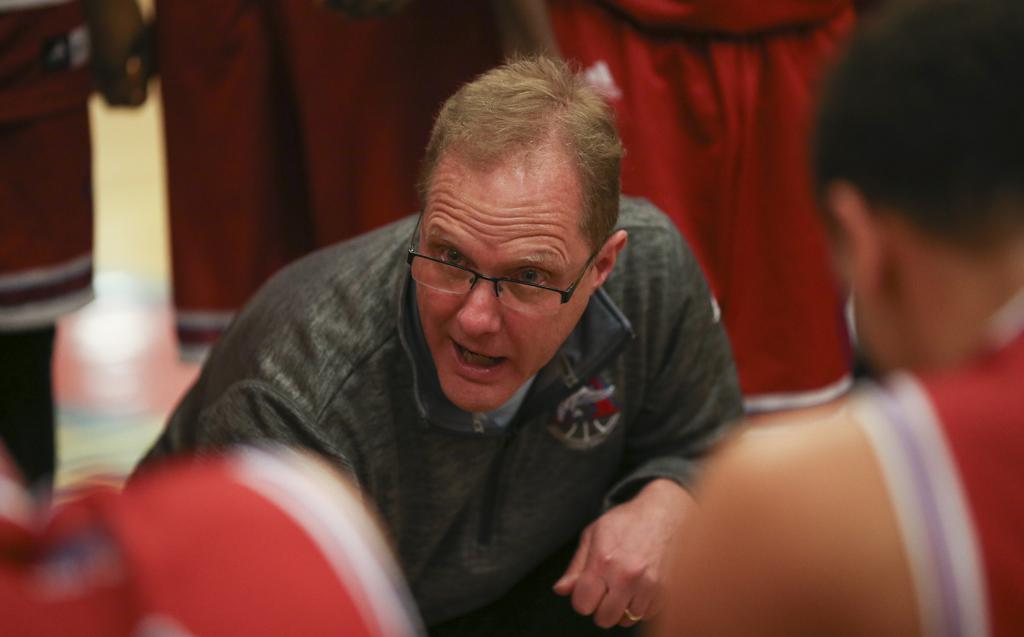 After 33 years as a boys’ basketball coach, 23 of them as a head coach — six at Richfield and the past 17 at Armstrong — Greg Miller left the bench for the final time after the Falcons’ 66-51 loss to Hopkins in the Class 4A, Section 6 semifinals March 9.

“It was kind of a surreal feeling to know before the game that this was going to end,” Miller said. “Before the game, a referee came up to me and said, ‘So how does it feel that this is your last game?’ and in the back of my mind, I thought ‘Not if we win.’ Once I stepped onto the court, I didn’t think about it. You get so into the game.”

There was no controversy surrounding his departure, no parental pressure and little fanfare, save for the return of many of his former players for his final game.

For Miller, 56, it was simply time. After 333 victories, 283 losses, countless sleepless nights and stressful days, numerous memorable games and hundreds of young lives touched, the time had come for him to step away from the game he loved since being an all-conference player at the long-closed Robbinsdale High School in the late 1970s.

Miller is also retiring at the end of the school year from his position as a social studies teacher at Armstrong but will continue to be the offensive coordinator for the Falcons’ football team.

“Lasting as long as I did,” he said with a laugh. “It is stressful, although it’s mostly self-induced. But the job can be so big and have so many details that you constantly need to be handling. Trying to keep everyone happy. It can be tough navigating those waters.”

For Miller, the key to remaining vital and motivated was change. “You get tired of your own voice after about five years,” he said. “That’s why we did all kinds of new things, so it didn’t always feel like the same thing.”

He was at the forefront of the current rage in basketball offense, spreading the floor and shooting three-pointers, à la the Golden State Warriors. Yet he was malleable, willing to change his approach to fit his personnel.

“You have to adapt,” he said. “The fun part is figuring out what works.”

The team that personified Miller’s style is the one he counts as his favorite: the 2007 Falcons, who came within a talon of a state championship, losing to Buffalo 67-65 on a last-second basket.

“Just getting there was cool,” he said. “We made a run with an above-average team.”

Miller’s favorite memory emerged from that season. It happened not in the state tourney but in the section semifinals against top-seeded Wayzata.

“We were down seven with two-and-a-half minutes to go and I called a timeout,” Miller said. “Our guys were saying ‘We’re not losing this game.’ In the pit of my stomach, I was like, ‘Well, we might.’ But we came back and won. Without that Wayzata game, our magical state tournament run doesn’t happen.”

Basketball has changed during his tenure, largely because of the growing influence of AAU basketball. But Miller refuses to join the chorus of voices who bemoan club basketball.

“It’s not all negative. My son played on some good AAU teams and oftentimes kids form closer bonds with their AAU teammates than with their high school teammates,” he reasoned. “They spend more time traveling and sitting in hotel rooms together.”

“I know a lot of good AAU coaches that go to clinics and want to be good coaches,” he said. “They have a reputation of not being good, but that’s not true.”

Miller also disputed the idea that athletes are harder to deal with now than in the past.

“I’ve used the same motivational techniques since the 1980s, and they work,” he said. “You treat them with respect, show them you know what you’re doing and hold them accountable. They want to be held accountable. I don’t coddle them.”

He lists more than one reason for walking away, including having achieved the Rule of 90, in which educators can retire with a full pension before age 65 if their age and years of service add up to 90.

“My son, Isaiah, is graduating and we can go out together,” Miller said. “I wanted to retire while I’m still young enough to do something, although I don’t know exactly what that’s going to be.”

He’s planning on writing a book on coaching, for one. And he’ll have more time to chase walleyes, a passion.

Most of all, Miller is happy to be walking away on his own terms.

“I gave it every ounce of energy, of creativity, of enthusiasm I had,” he said. “I didn’t want to coast to the end. It’s been a great career. I’ve been lucky.”