The Crusaders squandered an 18-point halftime lead, but recovered to hand the Panthers their first loss. 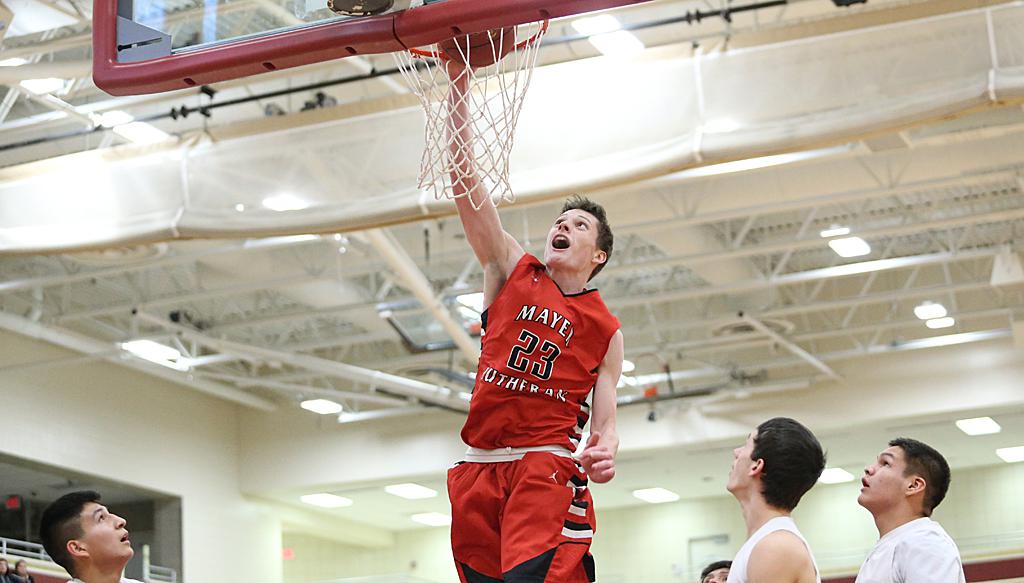 Baden Noennig (23) takes it to the basket uncontested scoring two of his 25 game high points. Noennig led Mayer Lutheran to a 54-52 victory including sinking the final two points with under a second remaining. Photo by Cheryl Myers, SportsEngine

The Mayer Lutheran Crusaders were cruising early Saturday, making their top-10 showdown with the Cass Lake-Bena Panthers look like a mismatch.

Late in the game, as Cass Lake-Bena, ranked No. 4 in Class 1A by Minnesota Basketball news, came back to take the lead, sixth-ranked Mayer Lutheran’s coach, Patrick Buchanan, told his bench to expect a Panthers run. And with a tie game and 9.5 seconds left on the clock, the Crusaders found a way to ensure that Panther run wouldn’t get in the way of a Mayer Lutheran win in the Super 60 Showcase at Maple Grove High School.

From his corner, the Crusaders' Brendan Feltmann saw junior Baden Noennig coming off a screen, so he fed him the ball. Noennig spun and put in a layup as time expired for a 54-52 win.

“I just saw that our guy was getting double-teamed out there, I called for it as loud as I could and my teammate, Matt Menth, set a back pick for me, and it was a wide-open layup,” Noennig said. “It was just perfect.”

It wasn’t easy. The Crusaders had an early 18-point lead, but it was the kind of tough finish Mayer Lutheran can learn from.

The Crusaders still had a double-digit lead with seven minutes to play, but the Panthers got some shots to fall and forced a few turnovers to take a two-point lead with 1:34 remaining.

Cass Lake-Bena outscored Mayer Lutheran 36-24 in the second half, but the Crusaders made enough plays when it counted.

“We’ve been in situations like this before,” Noennig said. “We’ve had a couple really close games. I think that trained us to finish out this game like how we did.”

A returning core of Noennig, along with players like Garrett Tjernagel and Kobey Woolhouse had the Crusaders ready to get to work this season. Buchanan was hired in July, and he said while the system and culture he wants to instill takes some work, the players and coaches have built good relationships already.

That said, each game is an opportunity to grow more. And a tight game against another of Class 1A’s top teams provided an opportunity for the Crusaders to face and overcome some on-court adversity.

“Being in different situations is an advantage,” Buchanan said. “An advantage for us to learn how to win in different ways, to know, OK, we can go back now and learn from them, say, ‘They were chipping, but what weren’t we doing correctly, what could we have done differently in the game?’ So it’s a great learning experience for us to be in certain types of games.

“I don’t want to win 26 games by 20 points or more. I like grind-out games, because to get to where we’re trying to get to, you’re going to grind it out. There are no 20-point victories. So I think this was great for us," he said.

It’s still only mid-January, but the feel of the game, especially late, was that of a playoff matchup. It should be good experience for a team that’s looking to push Cleveland for the title of top dog in the sub-section.

“They were a good team, and they definitely raised our play,” Noennig said of Cass Lake-Bena. “That’s perfect for training us to play better in playoffs. It was like a playoff game out there, I think. It was good competition.” 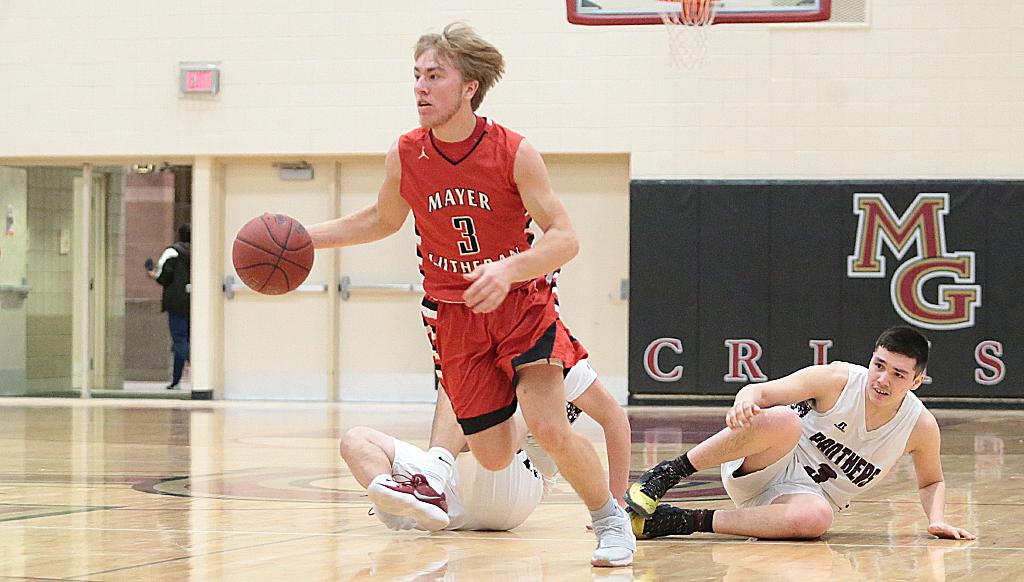 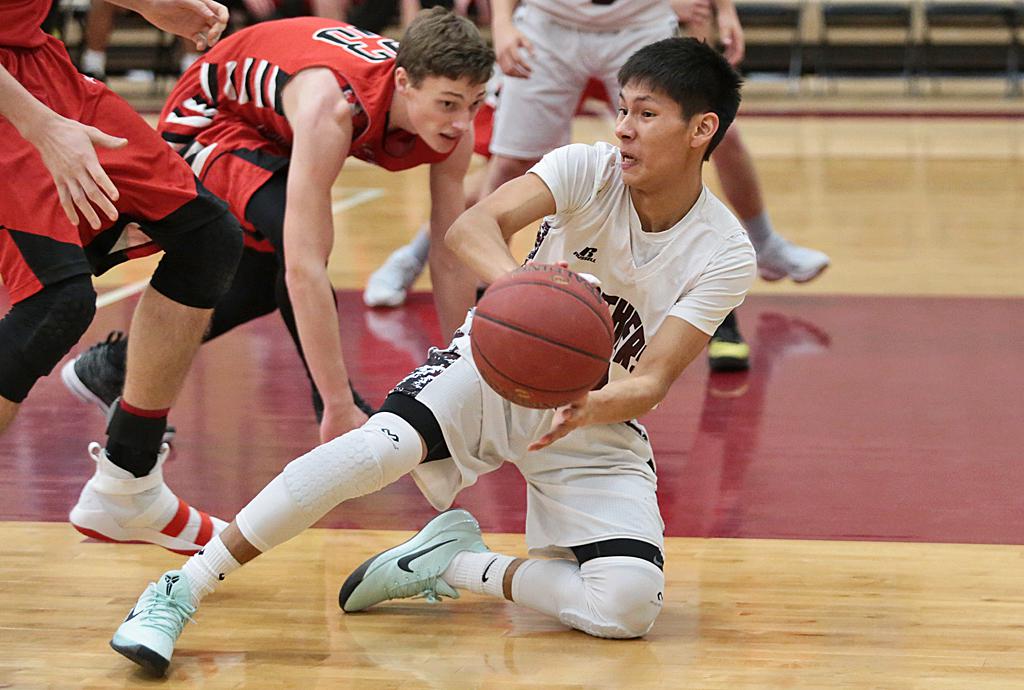 Arnold Kingbird led the second half comeback for the Panthers with 12 of his 14 points coming in the back half of the game. Photo by Cheryl Myers, SportsEngine

A matchup of two top-10 Class 1A teams lived up to its billing in the end, despite a halftime score indicating a possible blowout.

Mayer Lutheran, ranked No. 6 in Class 1A by Minnesota Basketball News, held off a feisty No. 4-ranked Cass Lake-Bena squad Saturday in the Super 60 Showcase, to win 54-52 on a last-second layup by Baden Noennig.

Noennig finished with 25 points to lead all scorers, while Branden Carlson added 10 and Kobey Woolhouse had eight for Mayer Lutheran.

The loss is the Panthers' first on the season.

Cass Lake-Bena trailed by 18 in the first half, but clawed its way back to take a 52-50 lead on a Michael Reyes 3-pointer with 1 minute, 34 seconds to play. Noennig tied it for the Crusaders, and on the following Mayer Lutheran (9-3) possession, he broke free for a layup as time expired.

Cass Lake-Bena (13-1) went on a 6-0 run to start the second half before Mayer Lutheran got back up to a 12-point lead. The Panthers finally cut the lead to single digits with about six minutes to go, and Jarell Jacobs hit a pair of threes to cut it to 48-45 with less than four minutes to play.

Arnold Kingbird had 14 points for Cass Lake-Bena, to go with eight rebounds. Jacobs scored 11 and Raul Washington added nine for the Panthers.

The MN Basketball Hub polls are for entertainment purposes only.