Max May attended Burnsville’s sophomore practices and games until he was well enough to play. 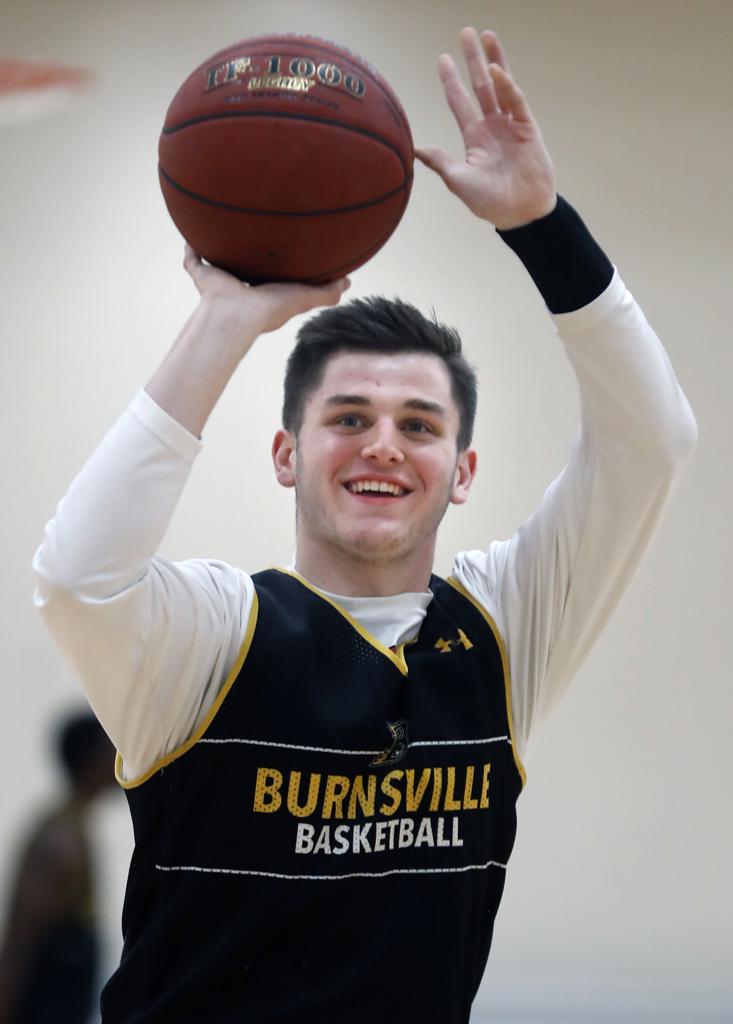 Max May fulfilled a longtime goal this fall when he committed to Waldorf University to play basketball.

He had to overcome a rare form of soft-tissue cancer to get there.

May, a Burnsville High School senior, was diagnosed with synovial sarcoma as a 10th-grader and sat out the basketball season. He returned to action as a junior and this year became a starter for Burnsville’s varsity team.

May committed to Waldorf, an NAIA program in Forest City, Iowa, in November.

“I’ve worked hard my whole life to get to this spot,” he said. “I’m not going to stop.”

May began playing basketball in sixth grade after trying several other sports. He rose through Burnsville’s youth program, earning a spot on Burnsville’s ninth-grade team for the 2014-15 season.

In the fall of 2015, May went to the doctor to have a cyst removed from his left wrist. Initially, the doctor told May and his parents that it was nothing to worry about, May said. But on their way back from a high school open house, May’s parents got a call from the doctor: It was cancer, a rare form but with a good prognosis.

“It was devastating,” said May’s dad, Jim. “You can’t fathom your child having something like that.”

Max said he didn’t know what to think at that point, saying a diagnosis “puts your whole world in a shock.” He used basketball to keep his spirits up during the radiation treatments that followed, attending every practice and game of Burnsville’s sophomore team.

After another surgery, May was deemed cancer free and cleared to return to the basketball court. But the wound on his wrist split open during his first workout, permanently ending his sophomore season.

Still, May said he was intent on returning to the court. In the spring of 2016, Jim May connected with Willie Vang, who founded and runs the Minnesota Heat AAU basketball program. May was able to join one of the Heat’s 16-and-under teams, playing almost the entire spring and summer season.

May played on Burnsville’s junior varsity team last winter and joined one of the Heat’s top 17-and-under teams last spring. He averaged more than 10 points per game, according to his coach, Sam Johnson, and was a vocal leader.

“He’s always thinking about what could have helped the team play better and more cohesively,” Johnson said.

May attended the Waldorf’s camp this past summer and took an official visit in the fall. He said he liked the town and the school, but especially the positivity of Waldorf coach Nigel Jenkins.

Jenkins said he knew he wanted May on his team after meeting him this past summer, noting May’s hustle and willingness to be coached. He said the 6-3 May projects to play shooting guard at Waldorf, adding that he appreciates his work ethic.

“We want guys who don’t take this game for granted,” Jenkins said, “and obviously Max is one of those guys.”

Burnsville coach Matt Eppen expressed a similar sentiment. He said May is the first guy at practice and the last one to leave, adding that he’s a strong role model for his teammates.

May has averaged seven points and three rebounds per game for Burnsville this season, as one of two seniors on the team. The Blaze was 1-8 as of last week, but May said he is confident the team can reverse its fortunes, citing a lesson he learned from having cancer.

“There’s a lot of negative times,” he said. “If you stick through it, the positive times will come.”