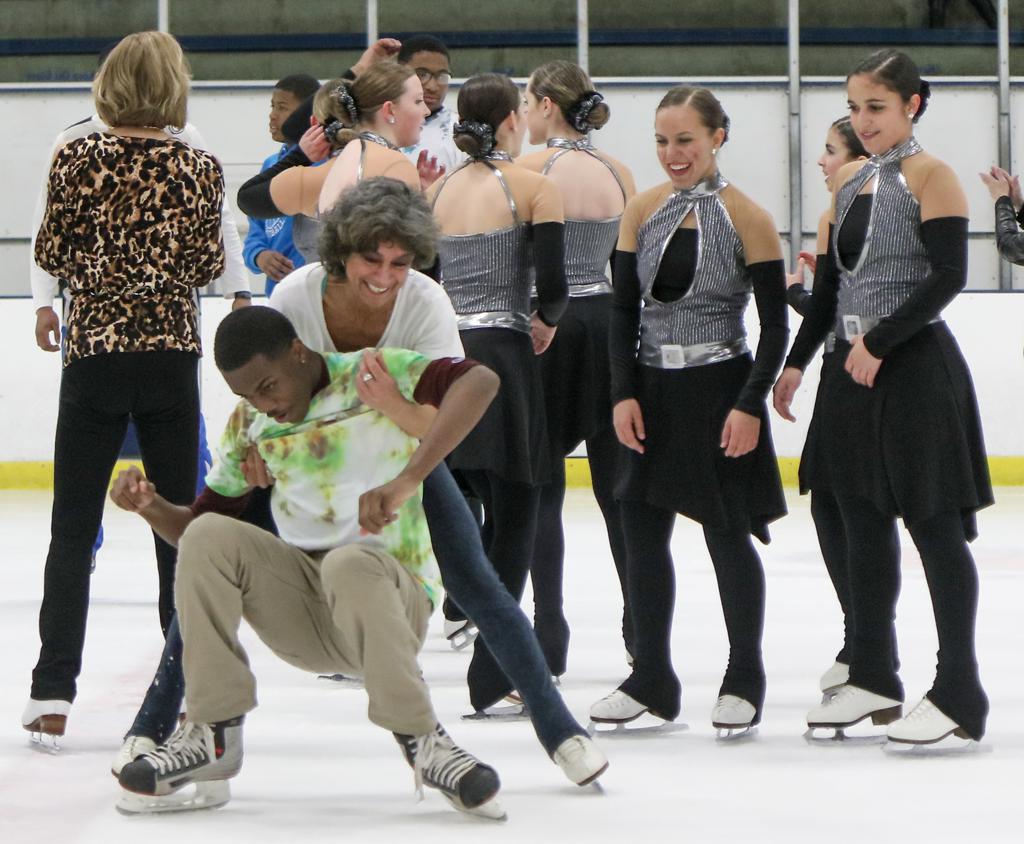 North High Polars basketball player Tayler Johnson is helped up from the ice by Jane Barrash, who has acted as a mindset development coach for both the Polars basketball team and the Braemar Panache skating team. Photo By: Matt Weber

As a 6-5 forward for Minneapolis North’s state championship team, ODell Wilson IV knows how to dribble a basketball.

But doing it on ice is a little trickier.

With “Basketball” by Lil’ Bow Wow playing through the speakers and plenty of spectators watching at Parade Ice Garden, Wilson and three basketball teammates skated to the song while dribbling basketballs.

Midway through the routine, Wilson tried to dribble between his legs and lost his balance, falling to the ice as he laughed out of joy and probably a little bit of embarrassment.

“The ball was slippery. It had no grip and I tried to crossover and hit it a little bit of my skate,” Wilson said. “I turned around and saw my teammates laughing.”

“Breaking the Ice: A (Skating) Show of Optimism,” held April 15, was designed to show people can come together and demonstrate optimism on an ice rink. In this case, it was members of the two Braemar Panache Edina synchronized skating teams, basketball players from Minneapolis North, and other community members skating to music.

Each group had its own routine, but the finale was a joint performance from the basketball players and synchronized skaters. Jane Barrash, executive director of the Contiuum Center and a Polars coach who helps players with vision, focus and mind-set development, said she organized the event as an attempt to show positives in today’s world.

Barrash has worked with both the skaters and basketball players and said she always wanted to combine the two in some way.

“We hope it creates new conversations for people,” Barrash said. “We need thinking in new ways so nobody expects this kind of thing. We need people to step outside of their routines.”

Having basketball players on ice skates is “so joyful,” she said.

“I want to use them as a model to inspire optimism,” Barrash said. “We all need leadership. Athletes, like it or not, are role models.”

Polars basketball coach Larry McKenzie served as master of ceremonies. He said he was first approached about the event over a year ago and first had serious conversations in February about making it happen. His players practiced their routine for about three weeks.

McKenzie said the event was to show that sports can break down barriers, putting basketball players on ice with synchronized skaters.

“To get some skaters from Edina, for our kids from one end continued to the other, to bring all of that together under one roof with one goal and to execute this, it’s just a beautiful thing,” McKenzie said.

The event also included skating performances by other community members and Barrash.

Wilson recovered from his spill just fine. He later came onto the ice with the rest of his teammates and the synchronized skating team and did a routine to “Celebration” by Kool & The Gang.

“To bring them together, I thought this was fantastic,” McKenzie said. “Never seen [my players] on ice skates before, but I’ve got some videos I’m going to keep around for a while.”

Mike Hendrickson is a University of Minnesota student on assignment for the Star Tribune.