Rosemount twins make the grade for on-, off-court success 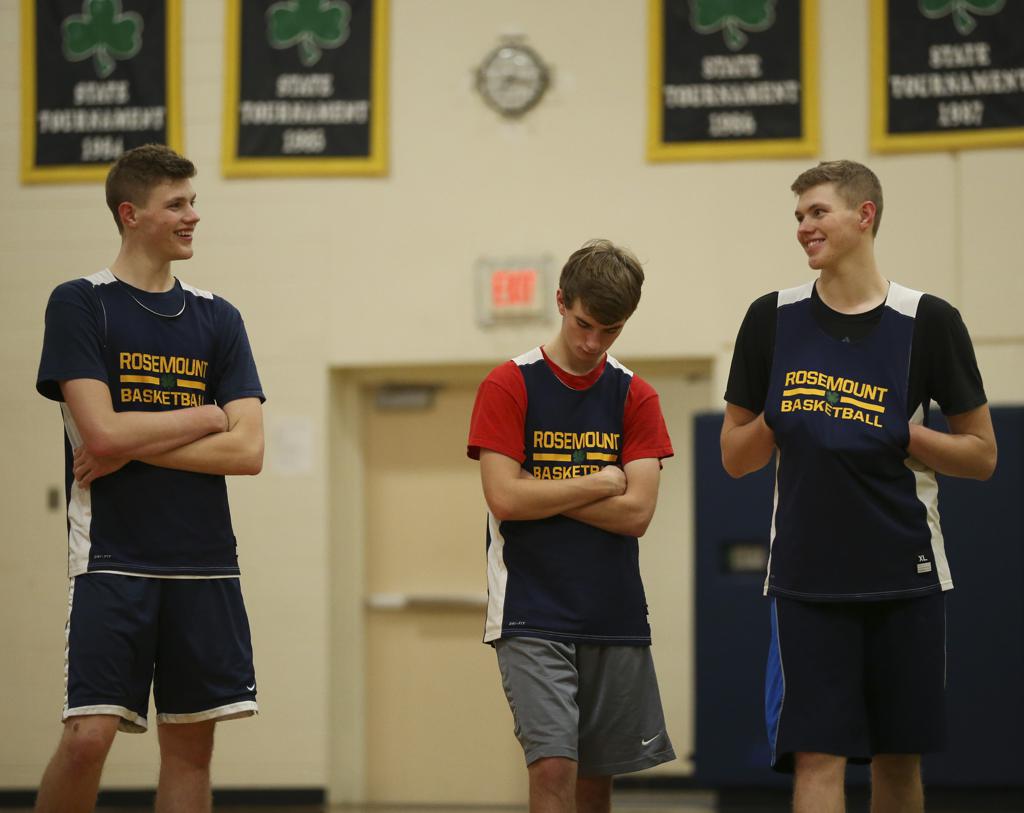 Rosemount's Alec Loehr, left, shared a laugh with his twin brother, Luke, as they sat out with Blake Tamminen while their teammates ran a drill during practice Monday afternoon. (Jeff Wheeler/Star Tribune)

Three years ago when Keenan Shelton became the head coach of the Rosemount boys’ basketball team, he did not expect to field comments from his two best players about his practices going too long.

Seniors Alec and Luke Loehr, who are identical twins, were not asking Shelton to shorten a given practice because they are lazy or were tired. If they asked, it was because they had an exam to prepare for and practice was cutting into studying time.

“Sometimes they come to practice and one of them will be mad because the other got a 97 percent on a test,” fellow senior captain Myka Edmond said. “I would kill for a 97 percent.”

The Loehrs’ brotherly competition in the classroom as well as on the basketball court earned them both scholarships to the United States Naval Academy. They are both 6-8, carry a 4.0 GPA and earned South Suburban all-conference honors last year.

Alec, the older brother by 33 minutes, said neither of them has had a grade lower than an A since sixth grade.

“They love academics. They love basketball, and they love their families,” Shelton said. “But they know that their ticket to life is through their academic success.”

Despite being twins and incredibly smart, most of their similarities end there. Luke is more of a presence in the paint than Alec, who was not shy to boast about having a better three-point shot.

Off the court, the differences are also clear.

Engdahl, Edmond and the Loehr brothers have been teammates for eight years. All averaged double digits in scoring last season when the Irish finished 6-19, playing in the state’s toughest conference.

Competing against Class 4A powerhouses Apple Valley, Shakopee and Lakeville North, Shelton said his decision to rely on a young core of players resulted in some lopsided defeats early last year.

The Irish took their “lumps,” as Shelton said, and started the season 2-16.

But after January, Shelton said, he noticed a change in his junior-led team. Rosemount won five of its final eight games, including an upset of Lakeville North, before losing to Apple Valley in the Section 3 semifinals.

“They understood that this is a process and what it takes to get to where they want to be,” Shelton said. “It is a challenge every single night in this conference. They know how they have to prepare now in order to see the success they want to see.”

Playing in such a difficult conference prepares the Irish for the section tournament. Whether Rosemount can dethrone two-time defending section champion Apple Valley, led by junior Tre Jones, remains to be seen.

When their season does end, the Loehr brothers will shift their focus to the Naval Academy.

Luke said the brothers’ decision to sign with Navy stems from their drive for academic excellence and discipline.

It is a natural fit for two brothers who have pushed each other just as hard academically as they do playing one-on-one in their driveway.

“We have formed a great relationship with their coaching staff,” Alec said. “We fell in love with the school and the whole idea of serving your country and getting a great education.”