A season’s worth of building, practicing and planning can come crashing down in a single evening. That happened to Wayzata and Woodbury over the weekend. 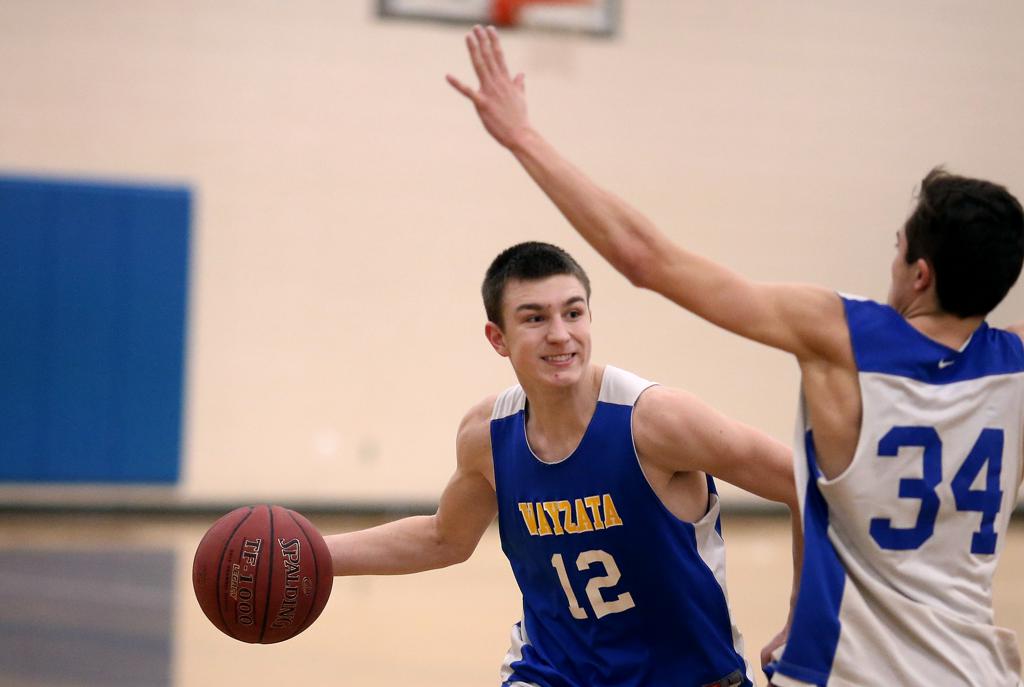 Gavin Baumgartner (12) passed the ball to a teammate during practice last week.

It’s what makes the postseason so fun and so frustrating. A season’s worth of building, practicing and planning can come crashing down in a single evening. Playoffs instill hope for average teams and fear for the above-average ones.

The string of upsets in boys’ basketball Saturday wasn’t quite as widespread as it was on the previous Saturday in boys’ hockey, but there were enough surprises to inject a shot of uncertainty into potential state tournament matchups.

The biggest surprise likely was Cooper’s upset of Wayzata. The Trojans had looked as good as any team in Class 4A after Jan. 1, at one point beating three No. 1-ranked teams in a four-game stretch: St. Croix Lutheran (No. 1, 2A), Minneapolis North (No. 1, 1A) and Hopkins (No. 1, 4A). Minneapolis North coach Larry McKenzie was so impressed that he considered Wayzata to be a favorite to win the Class  4A championship.

That came to a quick end Saturday when Melvin Newbern scored 28 points to lead Cooper to a 70-67 victory and end a Wayzata season that seemed destined for a deep state tournament run.

Here’s a look at some of the most compelling boys’ basketball section finals this week:

Section 1: Lakeville North vs. Rochester John Marshall, 6 p.m. Friday at Rochester Mayo Civic Center. Lakeville North slumped a bit at the end of the regular season, losing two of its past three games, but coach John Oxton is an expert at preparing his team. A John Marshall victory puts Gophers recruit Michael Hurt on the state tournament stage.

Section 5: Teams TBD, 7 p.m. Friday at Rogers. The semifinals will be held Tuesday, with undefeated Osseo, the No. 1 seed, hosting Park Center, and 2015 state finalist Champlin Park, the No. 2 seed, hosting Mounds View. A victory for the highest seeds would set up a must-see matchup between the Northwest Suburban Conference foes. Osseo won a previous meeting 77-64 in January.

Section 6: Cooper vs. Hopkins, 7 p.m. Wednesday at Osseo. Do the Hawks have magic left? Stopping Hopkins is a tall order. The Royals (27-1) have scored 90 or more points 17 times.

Section 6: Delano vs. DeLaSalle, 7 p.m. Thursday at Chanhassen. This is a vastly different DeLaSalle team than the group that has won the previous four Class 3A state titles. The Islanders have looked vulnerable at times, but their brand of defensive intensity and offensive execution is tailor-made for the postseason.