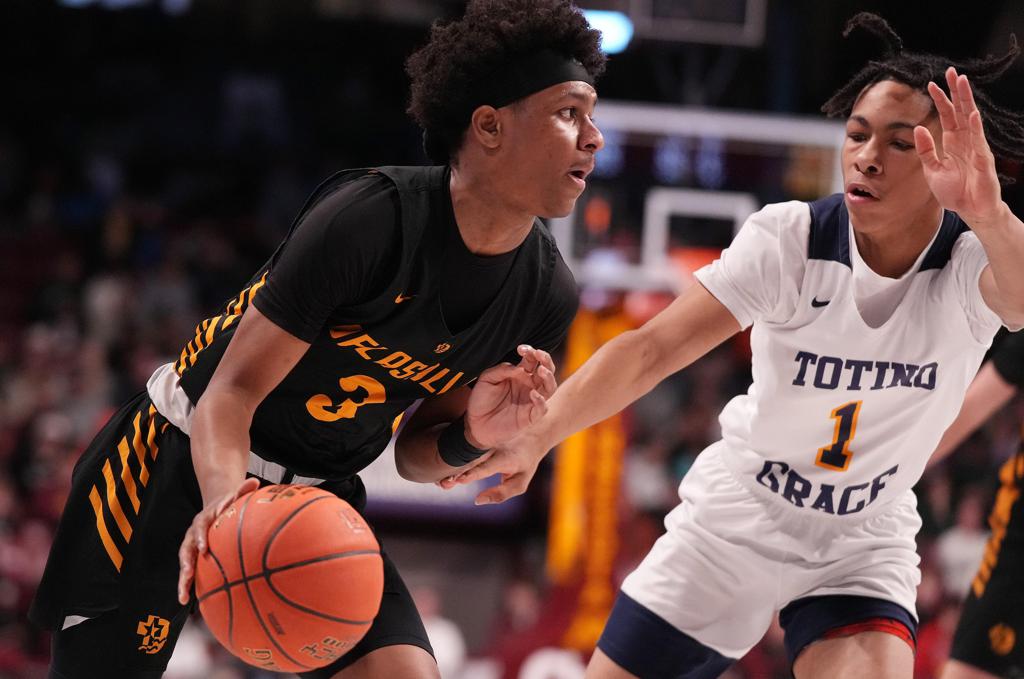 DeLaSalle guard Nasir Whitlock (3) drives past Totino-Grace guard Zy’Lerre Stewart (1) in the first half of the Class 3A championship Saturday at Williams Arena. (Photo by Anthony Souffle, Star Tribune)

Ahjany Lee’s three baskets inside, the area a taller Totino-Grace boys’ basketball team had to dominate, were the key offensive plays late in the Eagles’ 50-44 victory in Saturday’s Class 3A championship game.

Lee, a 6-10 senior forward who transferred from Byron, finished with 14 points, the last two coming on a two-handed dunk. He scored six consecutive points after DeLaSalle took a 44-41 lead with 3 minutes, 39 seconds remaining.

Game statistics showed Totino-Grace blocking six shots to DeLaSalle’s zero and outscoring the Islanders both in the paint (22-6) and in second-chance points (11-0).

The Eagles started and closed the second half with the stout play inside. In between, their presence near the basket sputtered.

“You’ve got to give DeLaSalle credit,” Eagles coach Nick Carroll said. “There’s no question we wanted to get the ball inside more. I did think the times we got it in the post and guys were aggressive, we had more success that way.”

DeLaSalle led 29-26 at halftime. The game’s mojo swung throughout most second half possessions. Skill and emotion with a dash of desperation both ways made for a compelling title game.

The resulting raucous atmosphere belied the quiet moment DeLaSalle coach Travis Bledsoe enjoyed an hour before tipoff, when he sat on a stool alone on the raised floor, playing out game scenarios.

“Close to perfection,” Bledsoe said of reality. “We played a great game and gave ourselves a chance to win.”

A jumper from the Eagles’ Taison Chatman knotted the score with a little less than four minutes remaining.

His Islanders’ counterpart and fellow junior guard Nasir Whitlock drained a three-pointer for a 44-41 lead with 3:39 left on the clock. Both Chatman (15 points) and Whitlock (18) led their respective teams in scoring. But DeLaSalle would not score again after Whitlock’s big shot.

“We knew we were going to come into a fight where we were both throwing haymakers at each other the whole way,” Carroll said. “We were trying to take blows and figure out when and how we were going to deliver ours back.”

Totino-Grace went to the biggest of its big guys to drop the hammer. Chatman held his dribble, waiting for an opportunity to present itself. Lee made his move.

“He stepped up,” Chatman said. “So, I dropped it off to the big man and he finished.”

Carroll said, “We just told the guys in the locker room, ‘DeLaSalle is going to walk away from this game with less points on the scoreboard, but what an unbelievable experience. That’s what a state championship game is supposed to be.’ ”