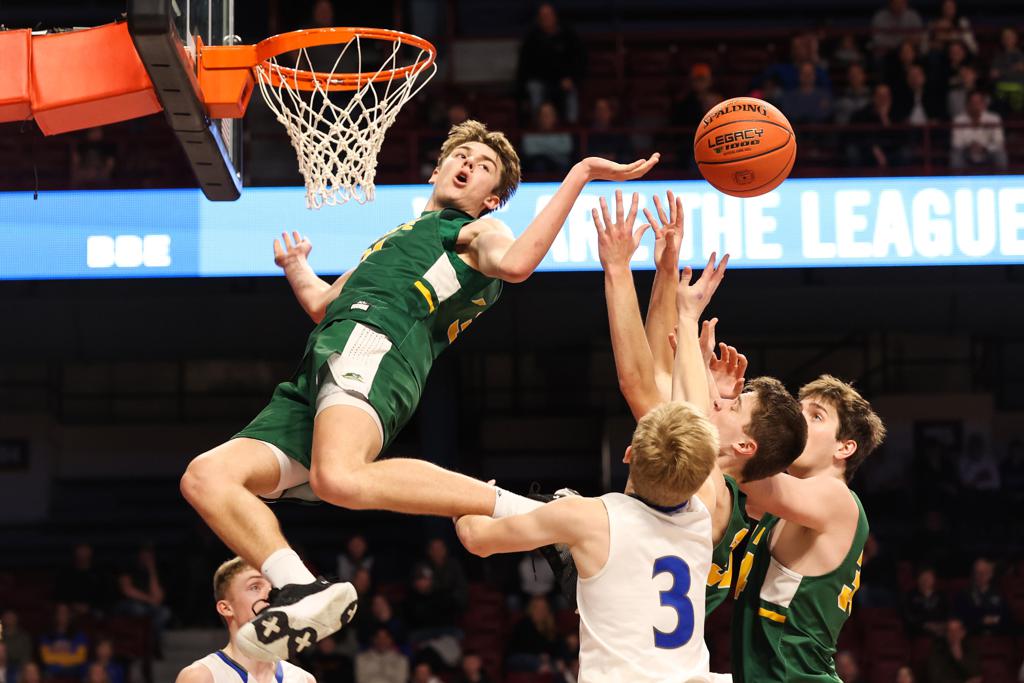 New Life Academy's Erick Reader (31) tries to regain control of the ball after missing a dunk against Belgrade-Brooten-Elrosa during their Class 1A semifinal game Friday at Williams Arena. (Photo by Cheryl Myers, SportsEngine)

Belgrade-Brooten-Elrosa junior guard Kaden Pieper explained why he and his teammates shut down New Life Academy’s final chance with ease to secure a 55-53 win in the Class 1A semifinals Friday.

“We lost two buzzer-beaters during the regular season,” Pieper said.

Belgrade-Brooten-Elrosa forced a turnover as time expired and the Eagles never got a shot off after the Jaguars (28-4) broke a 53-all by making two free throws with 12.7 seconds remaining. It concluded a wild final minute of play.

“It feels like a blur to me,” Jaguars coach Chris Anderson said.

Sophomore Luke Dingmann drew a foul with 12.7 seconds remaining, and made both free throws to give the Jaguars a two-point lead. Dingmann finished with 15 points as did Pieper.

The Jaguars (28-4) grabbed a 53-50 lead after a missed dunk by New Life Academy, but Colton Hendricks tied it up with a three-point play (a layup and free throw) with 1:01 remaining.

“I was going in confident,” Kaemingk said. “I shot decent the game before, and then, I got real used to the rims.”

New Life Academy coach Robbie Whitney said he was “super grateful” for his team to play in a game like this in the state tournament.

“Those are the games that you remember forever, in an arena like this with a team like this coming down to a one-possession game,” Whitney said. 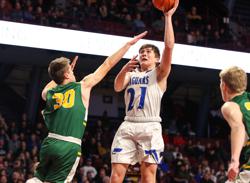 Gallery will be uploaded after the game.