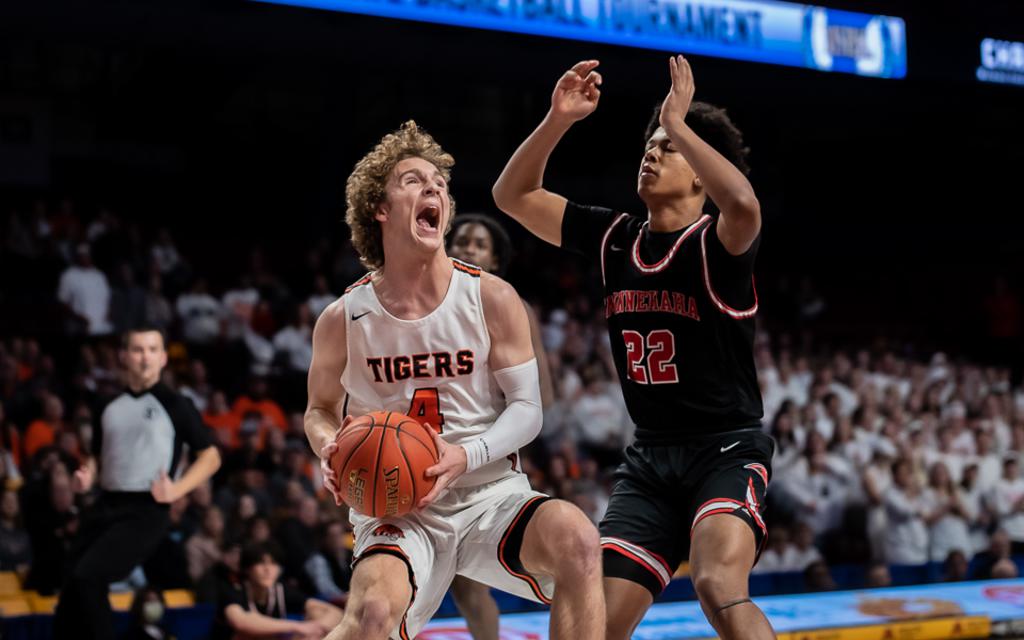 Morris Area/Chokio-Alberta's Durgin Decker (4) tries to fake out Minnehaha Academy's Marcus Horton (22) to get off a shot during their Class 2A state tournament quarterfinal game Tuesday night at Williams Arena. Photo by Earl Ebensteiner, SportsEngine

Morris Area/Chokio-Alberta built a 14-point halftime lead before withstanding a late Minnehaha Academy comeback to defeat the Redhawks 71-67 in the Class 2A boys’ basketball quarterfinals Tuesday at Williams Arena. 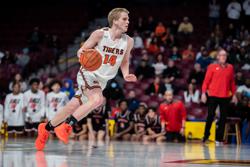 Minnehaha Academy missed four free throws in the final two minutes before Morris Area/Chokio-Alberta scored on a pair of late layups to secure the victory.

“We knew that they’d probably make a run,” said Tigers coach Mark Torgerson, in his 35th year. “I think these guys persevered, and it was really fun.”

Senior 6-8 center Jackson Loge scored 18 points and grabbed 16 rebounds and senior guard Thomas Tiernan had 20 points for the Tigers. Loge, who will play at Augustana next year, said he kept checking the scoreboard in the second half as his team’s lead dwindled.

“We had some turnovers, but took care of it enough to win,” Loge said.

Aligbe, who will play for Boston College next year, led the Redhawks with 36 points, including 11 in a row late in the second half. Minnehaha Academy had won titles in each of the past four state tournaments, but Aligbe was the only member of this year’s team with any state tournament experience.