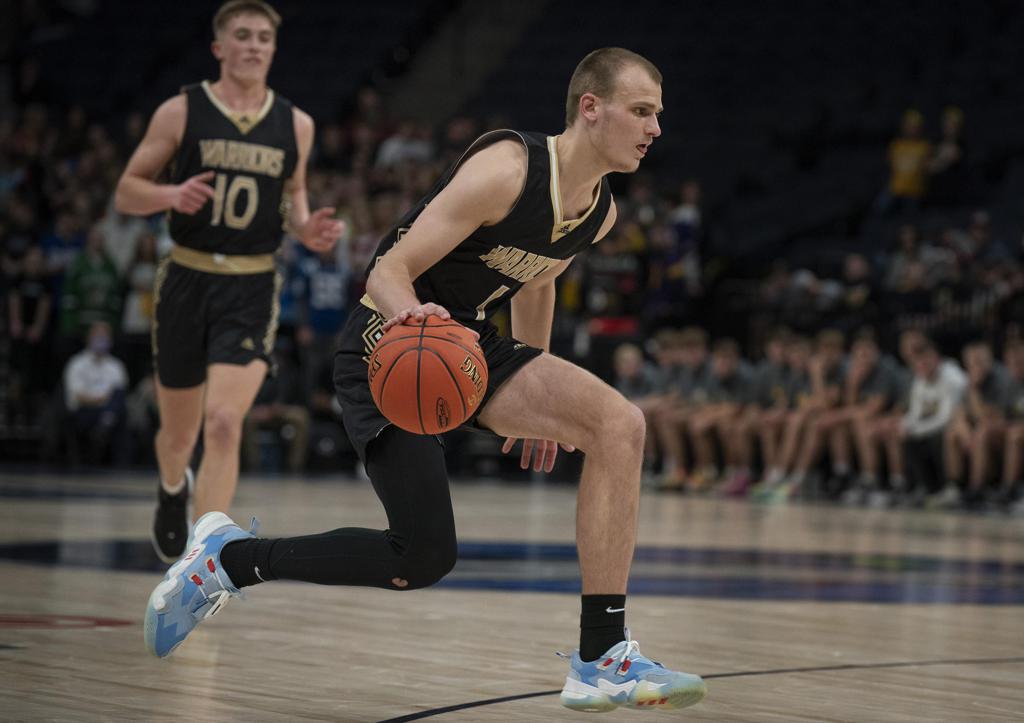 Eli King of Caledonia dribbled to the basket in the second half against Perham on Tuesday. (Jerry Holt, Star Tribune)

After sitting out a year because of a knee injury suffered during football season, Caledonia guard Eli King was thrilled to get one more shot at a state title.

The latest standout in the Warriors’ line of athletic King brothers, the 6-2 guard led Caledonia (28-1) with 17 points, eight rebounds and a handful of resounding dunks en route to a victory over the Yellowjackets (18-11).

Eli sat on the bench in 2021, watching his team lose a close game to Waseca in the final. He said being able to contribute rather than simply watch his teammates meant a lot to him.

“It’s just a whole ‘nother level, being out here on the court, rather than just sitting on the bench,” said King, who will play at Iowa State next year. “It’s another level of excitement.”

Caledonia took control out of the gate, racing to a quick 12-0 lead and built it to as much as 15 points in the first half.

“We hadn’t started well in the last three, four, five games,” said Caledonia coach Brad King, Eli’s father. “It’s easy to have a good start when you’re making shots and we knocked down a bunch of shots there in the beginning.”

Perham rallied late in the first half, cutting the deficit to nine, but Caledonia made a critical basket just before halftime, bumping the led back to 29-18 at the break.

Perham coach Dave Cresap admitted the early deficit was just too much to overcome against a team such as Caledonia.

“We came back and held them defensively and that team scores a lot of points,” Cresap said. “They’re so explosive. I was really proud of our effort defensively. You’ve got to give Caledonia credit, but our kids never quit playing and battled all the way to the end.”