Tigers benefit from second half turnovers by Packers. 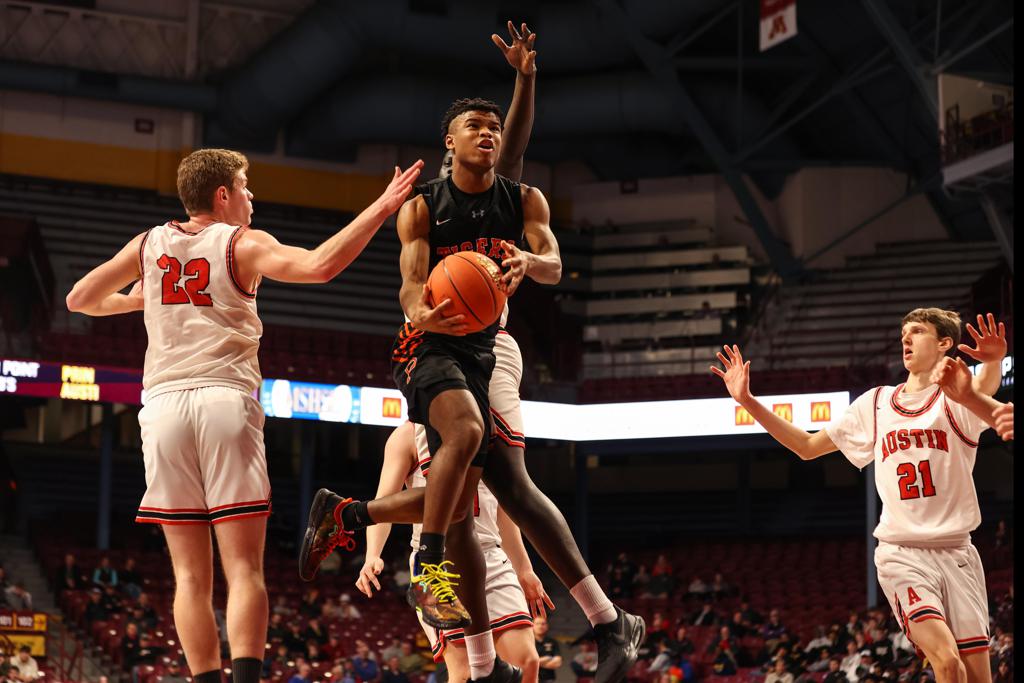 Princeton's Cooper Nowak splits the Austin defense as he drives down the lane during their Class 3A state tournament quarterfinal matchup at Williams Arena. Photo by Cheryl A. Myers, SportsEngine

Princeton turned the ball over 14 times in the first half, but in the second half, it took advantage of Austin turnovers by making four quick buckets in under a minute to extend its lead.

“When you come out and you turn the ball over on three, four straight possessions that lead to runouts and layups and easy baskets for Princeton, that was the difference,” Austin coach Kris Fadness said. 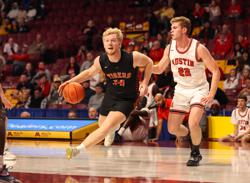 That momentum propelled No. 2 seed Princeton past unseeded Austin 73-63 in the Class 3A boys’ basketball quarterfinals Tuesday afternoon at Williams Arena.

The Tigers (27-1) relied on efforts from senior forward Haydn Stay and junior guard Cooper Drews, each with a double-double. Stay grabbed 10 boards by halftime, finishing with a game-high 23 points and 16 rebounds. Drews, with 22 points and 12 rebounds, was the star from three-point range, making six of 11 shots.

The teams traded second-half scoring runs, but the Tigers maintained their lead in the closing minutes with Stay’s only trey of the game and another from Drews.

“I think that speeding [Austin] up was the biggest thing,” Stay said. “We were taught to play fast and play hard.”

Austin junior Ater Manyuon led his team with 17 points. The Packers (17-13) shot 38% for the game and only 2-for-23 from beyond the arc. Fadness called that stat Austin’s “demise.”

“We couldn’t make a perimeter shot,” Fadness said. “And when we did make runs, Princeton answered.”