The Wolfpack trailed the Jaguars by as many as 12 points in the second half, but they found a way to advance to the final. 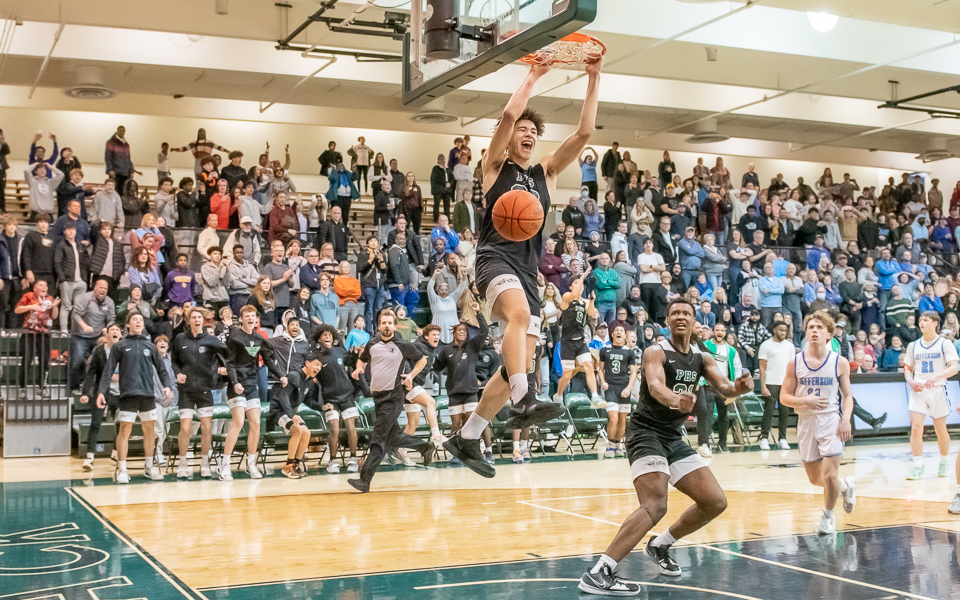 Jamari Walker of the Wolfpack gets the slam dunk in the closing seconds of the Class 4A, Section 3 Semifinal Saturday night. The Wolfpack defeated the Jaguar’s 72-68 in front of the home crowd. Photo by Earl J. Ebensteiner, SportsEngine

After giving up three consecutive baskets to open the second half, Park of Cottage Grove coach Mike Weah called timeout as his team was down 12 points less than two minutes into the second half.

With the Bloomington Jefferson crowd roaring with excitement, Weah gave his team an impassioned speech. 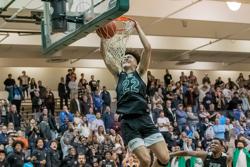 “We had to convey to them that this was it,” Weah said. “If we don’t lock in right now and dominate, we were going to go home and never play together again.”

The Wolfpack erased the 12-point deficit and held off a late push from the Jaguars as Park of Cottage Grove won 72-68 in Saturday’s Class 4A, Section 3 semifinal as the Wolfpack advance to Thursday’s section final at Eastview.

The two squads traded punches during the first half. Bloomington Jefferson (20-7) gained the upper hand with a late push in the first half to enter the break leading 35-29. Sophomore guard Daniel Freitag and senior guard Hayden Holland paved the way for the Jaguars. Holland poured in 13 first-half points while Freitag tallied 10.

After the early push from the Jaguars, Park of Cottage Grove began to follow its coach’s plea and began to push back. For those who have seen the Wolfpack, it’s hardly surprising a lot of that happened thanks to senior Pharrel Payne. The University of Minnesota commit once again attracted a lot of attention out of the opponent. He finished the first half with 12 points and tallied 10 to finish with 22.

“Pharrel is the true definition of dog mentality,” Weah said. “For a big guy to be able to play like that for the whole game with that speed is amazing.”

Bloomington Jefferson big men Cashaun Scott-Kobold and Anthony Thorman battled with Payne on both ends of the floor.

“I thought Jefferson’s bigs did a great job battling with him," Weah said. “They weren’t going to let him do anything easy.”

With Payne dominating on one end of the floor, Freitag starred for the Jaguars. The sophomore is considered one of the state’s top recruits for the Class of 2024.

“[Freitag] is crazy man,” Payne said. “He just comes out all over the floor.”

Besides Payne, the comeback for Park of Cottage Grove was fueled by junior guard OT Omot and senior forward Evan Bearth. Omot was there throughout the game as he finished with 20 points.

“This was his best game for sure,” Weah said. “OT can be so special. He’s a really good player and a really good athlete. He’s the reason this season is still going.”

Then there was Bearth. The senior did not register a point in the first half because he was in foul trouble. He came out with a vengeance in the second half as he poured in 17 points.

For Bearth, the points came two different ways—free throws and three-pointers. The free throws helped his team secure the game for the Wolfpack. The shots from long-distance helped fuel the rally and sent the mostly full Park gym into a frenzy.

“It’s amazing because it’s just a three to me,” Bearth said. “All of the momentum just starts turning I guess. It is really fun.”

The Wolfpack eventually had a lead as big as eight in the game’s final minutes. But some miscues and timely Jaguar shooting made it a two-point game with fewer than 10 seconds to go. Park secured the win in a big way as senior forward Jamari Walker threw down a slam dunk that ignited a frenzied celebration amongst the Park fans.

The celebration came for a Park program that does not have much of a track record when it comes to boys’ basketball postseason success. The Wolfpack’s lone state appearance came in 1970. Park was a game away from state last season before falling in the section final to Rosemount.

This year, the Wolfpack will meet up with Eastview on the Lightning’s home floor. Though winning a section title is something Park has not experience in quite some time, facing the Lightning is something the Wolfpack have done so regularly. This is the sixth consecutive year the two teams have met in sections.

“It wouldn’t be a season if we didn’t play Eastview,” Weah said. 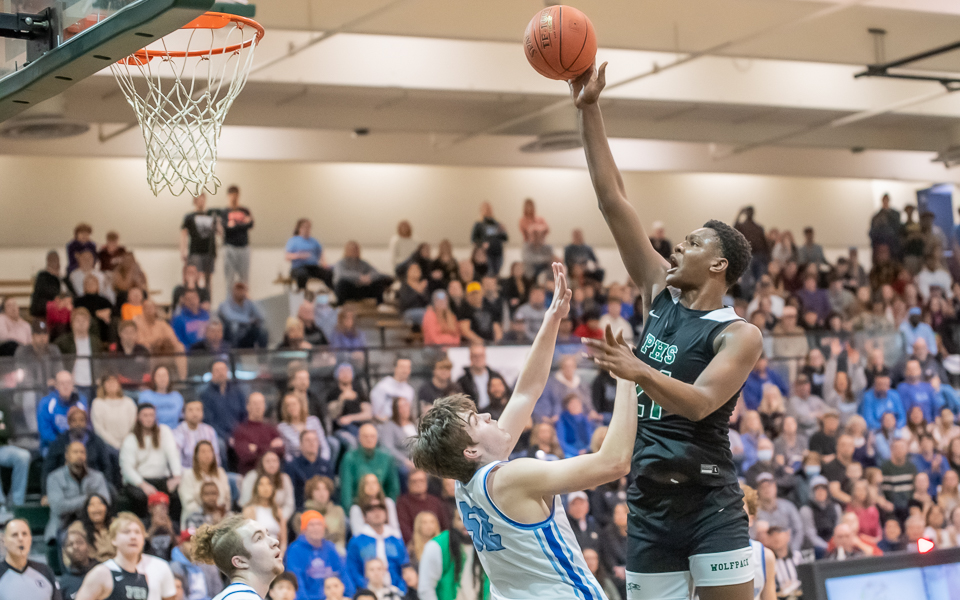 The Wolfpack’s Pharrel Payne had a team-high 22 points Saturday night in the Wolfpack’s 72-68 win over the Jaguar’s in the Class 4A, Section 3 Semifinal. Photo by Earl J. Ebensteiner SportsEngine

After trailing by as many as 12 points in the second half, Park of Cottage Grove rallied on its home floor to defeat Bloomington Jefferson in the Class 4A, Section 3 semifinal on Saturday, 72-68.

The Wolfpack (20-8) battled back thanks to senior forwards Pharrell Payne and Evan Bearth. Payne, a six-foot-9 big man headed to the University of Minnesota, was a force in the middle and finished with 22 points.

As for Bearth, his scoring contributions all came in the second half. He knocked down three 3-pointers to go along with a handful of big free throws to finish with 17. Junior guard OT Omot was one of the most consistent scorers for Park of Cottage Grove with 20 points.

Though the Wolfpack had a lead as big as eight points in the game’s final two minutes, Jefferson forced the game to come down to the wire but could not finish off the late comeback attempt.

With the win, the Wolfpack head on the road on Thursday to face top-seeded Eastview. 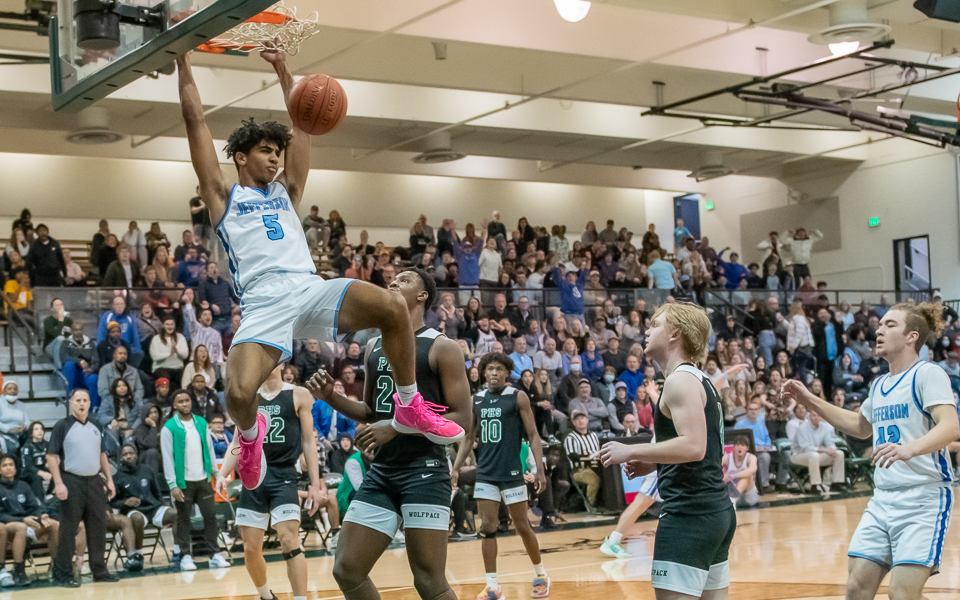 Daniel Freitag had a game-high 28 points as the Jaguar’s lost 72-68 to the Wolfpack at the Park of Cottage Grove high school. Photo by Earl J. Ebensteiner, SportsEngine