The Panthers' 10-0 run in the first half proved decisive. 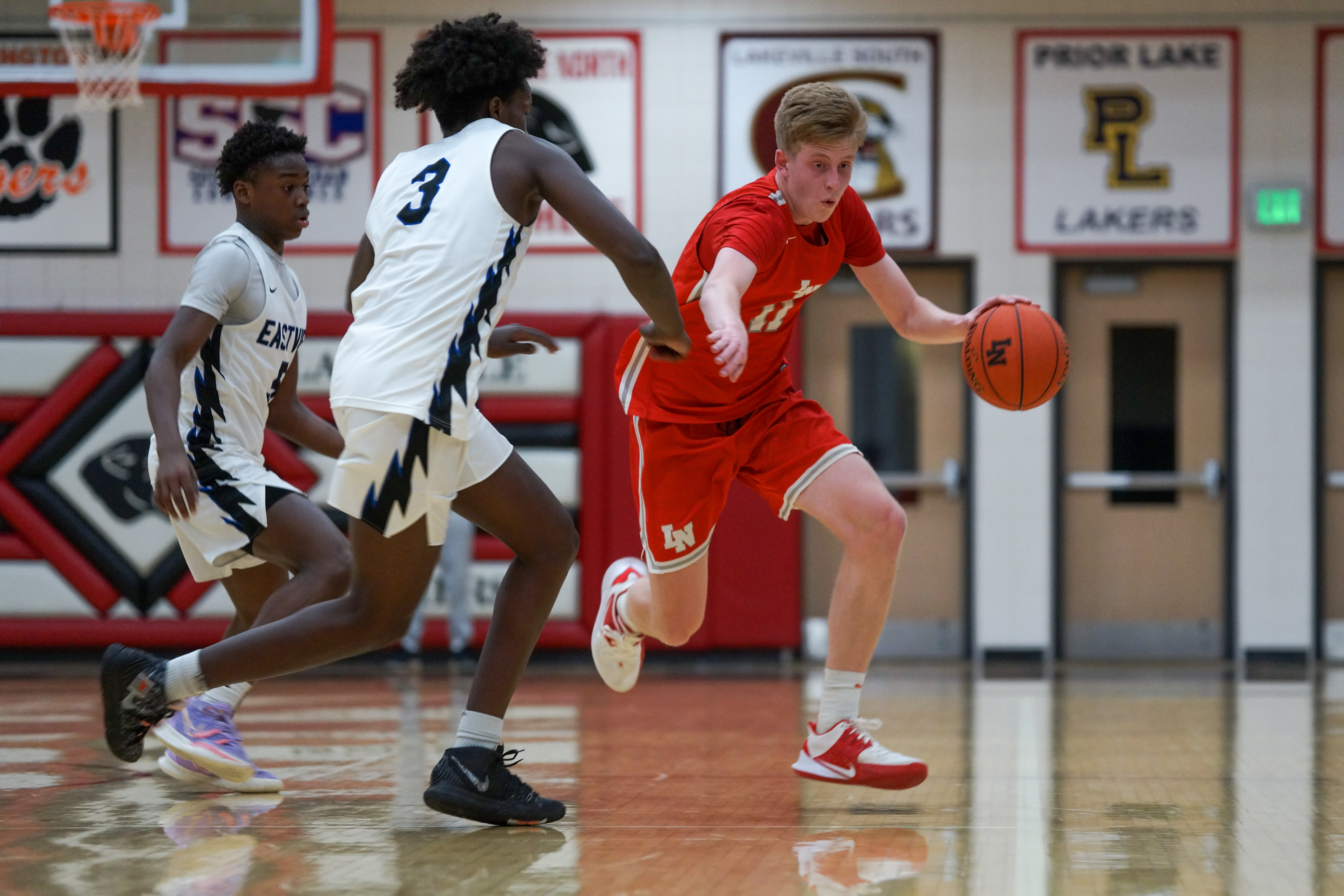 Winning can be a great reinforcement when playing a team sport like basketball.

Lakeville North had an uncharacteristic stretch where it lost three of its most recent five games as it headed into Tuesday's matchup with Eastview. But when you play in a deep league like the South Suburban Conference, challenging games fill the schedule.

Lakeville North (13-5, 8-3) found an answer when it used a late first-half run to propel itself to a 78-69 win over the Lightning. Eastview (14-4, 8-3) cut the deficit to four in the second half, but the Panthers pulled away to alter the season's momentum. 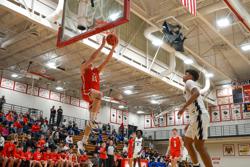 “I think it’s one of those things where we just play a lot of good teams in our league," head coach John Oxton said about the stretch. "Sometimes they get stacked up, and that's the way it goes. You have to grind through that, and I was just proud we were able to get a W tonight."

Eastview, ranked No. 6 in Class 4A, headed into the game with a one-game lead in the conference standings over Lakeville North. And Tuesday marked the third top-10 ranked opponent in the past six games for the Panthers.
There was also some extra motivation after Lakeville North dropped its most recent game 84-50 at conference foe Farmington.

“Tonight was good to get back into the flow of winning after a really tough loss to Farmington on Friday night," said Jack Robison, who scored 24 points in Tuesday's win. "As a team, we really came together over the weekend and yesterday at practice. We took that personally, that’s not okay for us to lose by (34 points).”

Lakeville North is playing the season with just three seniors on the varsity roster, a low number considering the school has an enrollment larger than 1,700 students. But the program more than makes up with talent. Junior Nolan Winter has tallied 17.5 points per game in 17 contests as a junior. And Robison, a sophomore, is averaging 17.3 points per game after building up varsity experience as a freshman.

“Last year, I didn’t play a ton, but I was on the varsity team and I got to learn from seven seniors who have learned from the past guys," Robison said. "That’s just the tradition here at our school, we’re used to winning and we're used to being in the state tournament. We know what it’s like.”

The Panthers have eight games remaining on the regular-season schedule, including seven against conference opponents. Then it will be time for the section playoffs, where the Panthers hope to advance further than last year when it lost to eventual tournament champion Rosemount in the semifinals.

“Every game is a lesson, and you are just kind of learning some lessons along the way," Oxton said. "And when you get to the playoffs, that’s when the test is going to be.” 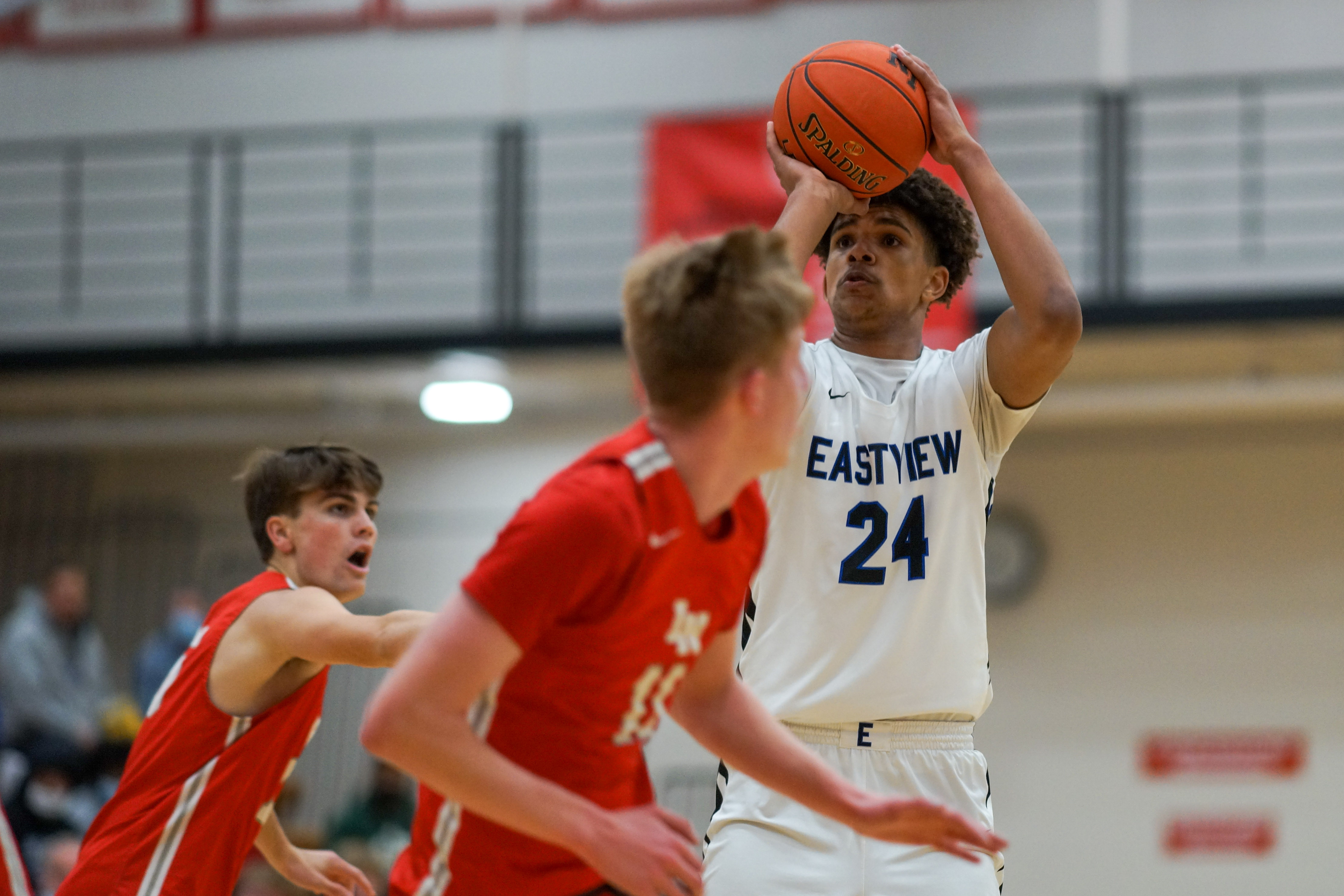 Jamal Ambrose (24) led the Lighting with 21 points in a losing effort to Lakeville North, Feb 8. Photo by Korey McDermott, SportsEngine

A 10-0 run for Lakeville North late in the first half gave the Panthers the boost they needed in a 78-69 win vs. Eastview at home Tuesday.

Eastview (14-4, 8-3) led 30-29 with two minutes, fifteen seconds left in the first half, but the 10-0 run in the following 90 seconds gave the Panthers an advantage they never gave back. The Lightning cut the deficit to four points late in the second half, but were not able to climb any closer.

Lakeville North's Hudson Vaith (22) manages to get a shot, and a tough two points, Tuesday night against Eastview. Photo by Korey McDermott, SportsEngine