The organization was honored by two Minneapolis-based groups with a 2022 History Makers Award for its work to bring together sports and community. 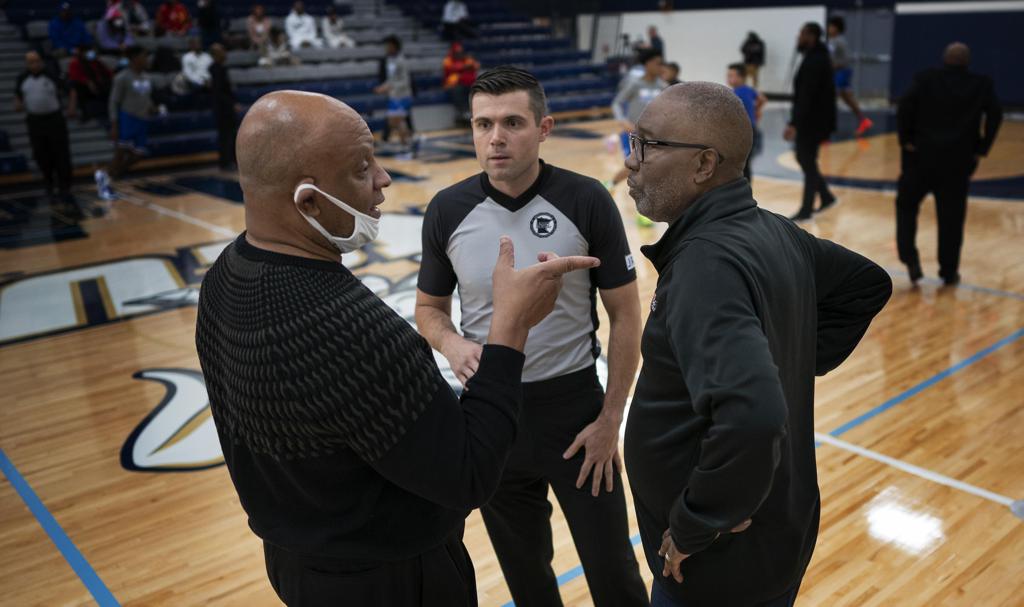 Larry McKenzie, right, and Greg Wise, a coach from Texas, met with a game official before the George Floyd Memorial Holiday Classic in December. Photo by JERRY HOLT. Star Tribune

Longtime Minneapolis basketball coach Larry McKenzie was pleasantly surprised to learn of the 2022 History Makers Award bestowed on the Minnesota Black Basketball Coaches Association, a group that celebrated one year of existence in October.

McKenzie, coach of the North Polars boys’ team, said the recognition from the Minneapolis Department of Civil Rights and Minneapolis Black Employee Network owes to great strides in a short time.

“Since the beginning of this association, we’ve become a respected voice for Black high school coaches,” McKenzie said. “It makes you feel good that you’ve come so far this quickly.”

The Minnesota Black Basketball Coaches Association presented a pair of recent tournaments honoring George Floyd and the Rev. Martin Luther King Jr., the latter featuring a breakfast for all teams and a viewing of King’s “I Have a Dream” speech.

“We wanted to do more than take advantage of a day off and just trying to get more people in the stands,” said McKenzie, who will accept the  2022 History Makers Award on behalf of the Minnesota Black Basketball Coaches Association at a ceremony Feb. 17.

Ja’Sean Glover scored a school-record 60 points in Madelia’s 88-50 boys’ basketball victory over Cleveland on Monday at Madelia, Minn. Glover, a senior, broke his own record of 51 points, which he set last season. His point total is a high for boys’ basketball in the state this season.

Hibbing senior Ayden McDonald, one of eight boys’ players in state history with 1,000 assists, scored 24 points in Hibbing’s loss to Orono on Saturday to go over 2,000 points for his career.