The Sabers held the Panthers to 18 points in the first half en route to victory. 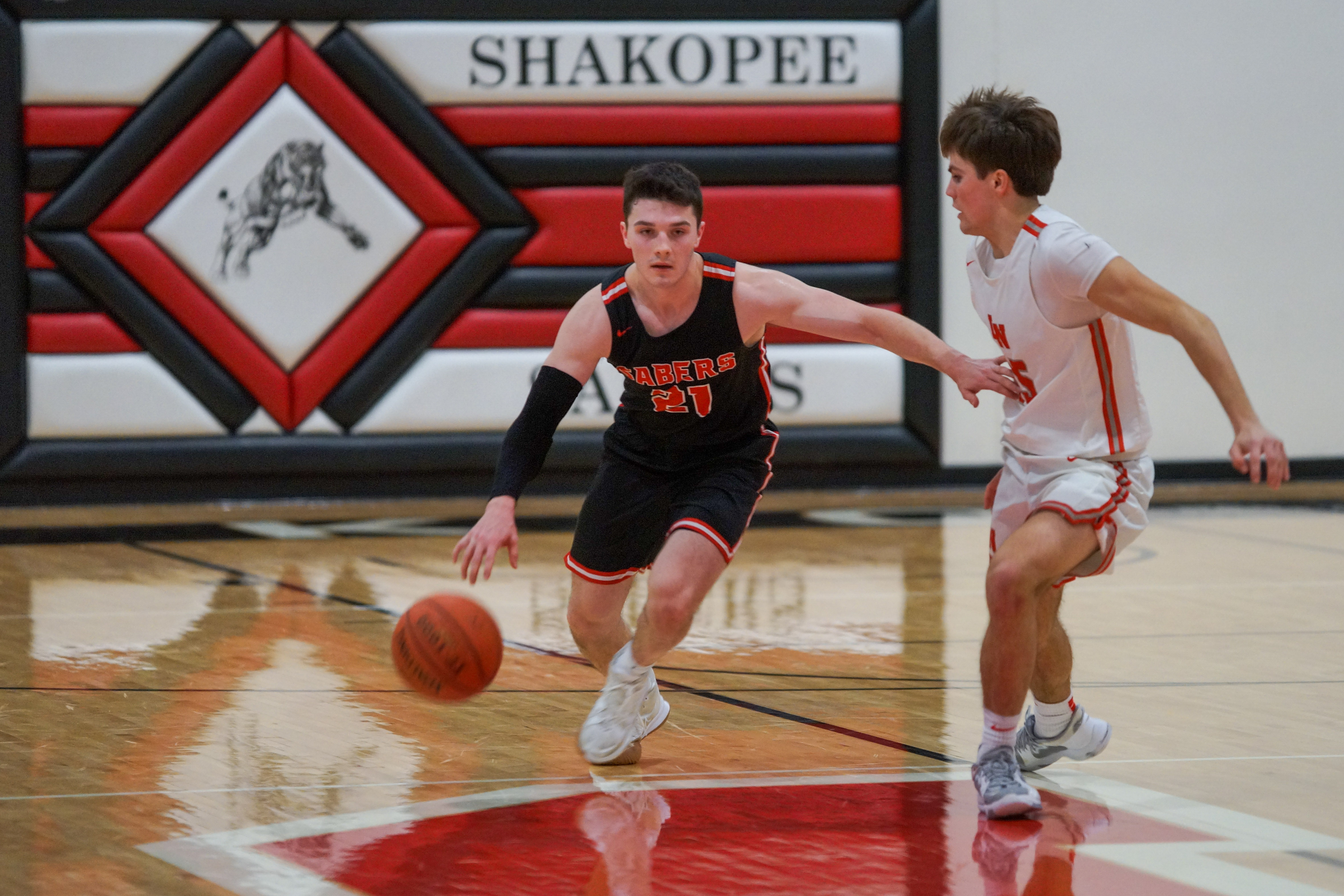 They say talk is cheap, but not to the Shakopee Sabers.

Lakeville North boasts a pair of young Division-I prospects, but the veteran experience and connectedness of Shakopee helped it win wire-to-wire, 68-56, and climb into a share of first place in the South Suburban Conference.

“Really good communication game for us,” said senior guard Cade McGraw, who led the team with 16 points. “We were all talking the entire time, energy was great. Good pressure. Really just did our job.” 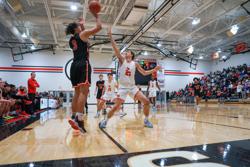 The job was to snuff out the Panthers’ 6-foot-5 sophomore shooting guard, Jack Robison, and 6-foot-8 junior forward Nolan Winter. Both have received Big Ten Conference offers, among others.

The duo finished with 16 and 13 points, respectively, but were limited to seven combined in the first half.

Lakeville North averaged over 68 points per game entering the night.

“Just kind of sticking to the communication with as much switching as we were doing. Keeping our communication at a high level,” Shakopee coach Jake Dahmann said of the defensive keys. "We talked before the game about focusing for 36 (minutes). We’ve had spurts this year where we’re really, really good for a half then take a step back. That’s part of the learning process.”

Shakopee senior guard Yonis Mohamud hit his first of three three-pointers to open the game’s scoring. He finished with 11 points despite a pair of early fouls. The Sabers (12-1, 5-1) got off to a hot start, leading 10-2 in the opening minutes.

The lead swelled to 35-18 at halftime with a variety of Sabers making impacts. Four players average double figure scoring on the season for a team putting up over 80 points a night.

“The biggest thing is we just got out-physicaled,” Lakeville North coach John Oxton said. “I think we just weren’t nearly as aggressive as we needed to be. You’ve got to give them a lot of credit, they’re a very good team, they’ve got a bunch of seniors, physically strong dudes, and we just did not play with the physicality we needed to play with.”

Shakopee, ranked No. 2 in the Minnesota Basketball News Class 4A state rankings released on Jan. 20, made it a point to disallow easy baskets. It also held No. 4 Lakeville North without a three-pointer until Winter sunk one with 3:20 left in the first half.

On offense, the ball was moving all over the place.

“We shared the ball tremendously well this game. Quinten, he had a phenomenal game,” Shakopee senior forward Nick Katona said of teammate, Quinten Snell, who had nine of 11 points in the first half. “Great to see that. We hit shots in the first half. In the second half, not so much. But our togetherness was strong. That’s what it came down to.”

Katona added 10 points. He’s off to the Minnesota-Duluth, next season to join older brother, Charlie, on the roster.

“Growing up, me and him were always butting heads. My sophomore year, his senior year, I started my first game. He was there. That’s when everything kind of opened up,” Nick Katona said. “He’s excited for me, I’m super excited to go up there. You don’t get the chance to play with your brother too many times. To play with him at the next level will be out of this world.”

Lakeville North opened the second half strong and pulled within nine points midway through the frame, but timely Shakopee shots stemmed any rally posed.

Shakopee opened the season with a 10-0 record returning much of the core that made it to the 2021 state semifinals and earned second place in the conference.

After a 74-73 setback Jan. 17 at Farmington, the Sabers hope they've regained their mojo.

“I think we’ve come together to play good team basketball again,” McGraw said, “and take on whatever comes in front of us.” 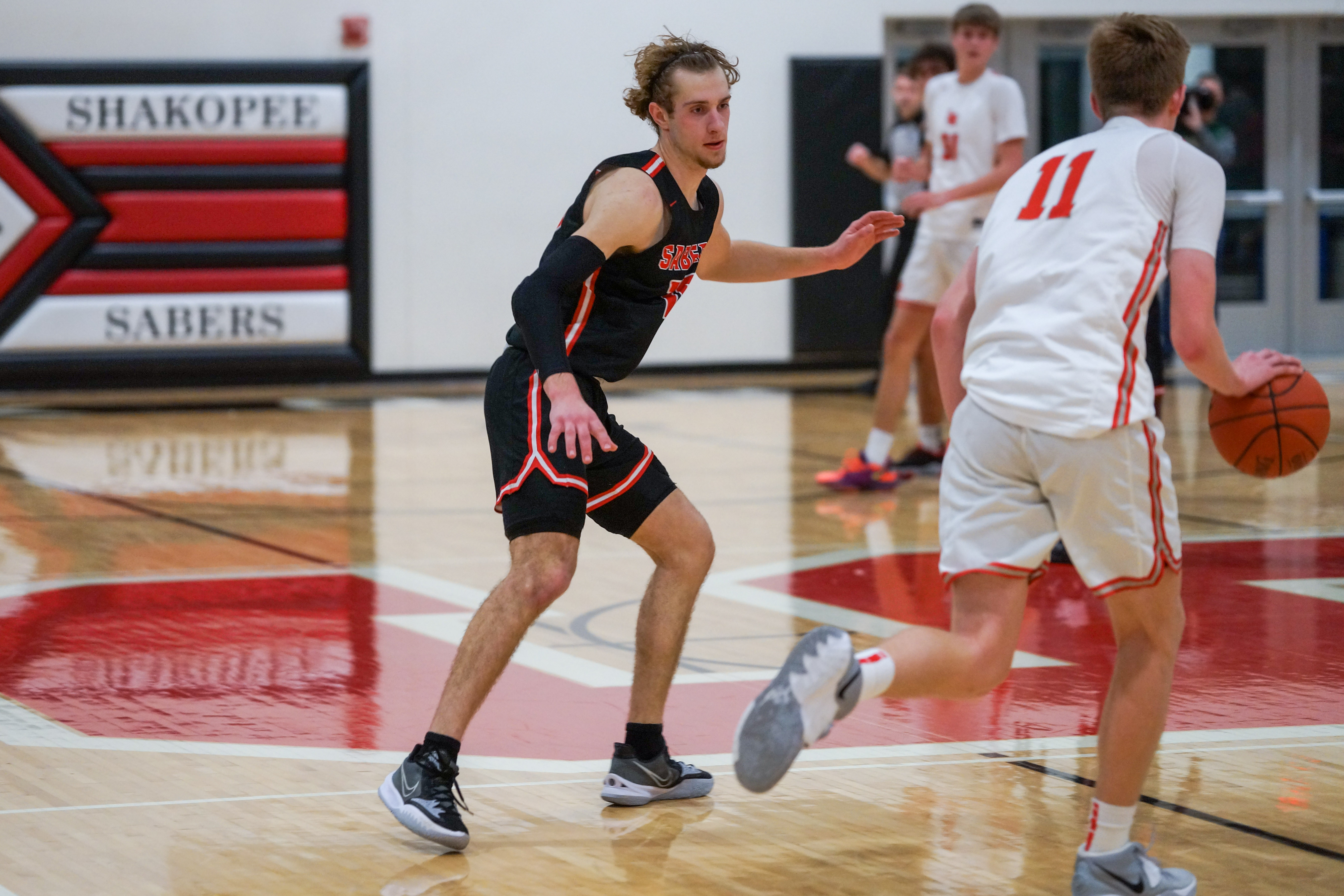 Shakopee leads the South Suburban Conference and currently owns the tiebreaker after a resounding win.

The Sabers played host on Friday and downed Lakeville North 68-56.

Senior Cade McGraw led Shakopee with 16 points. He was joined in double figures by senior backcourt mate, Yonis Mohamud, with 11 and 10 for senior forwards Nick Katona and Sam West. West’s points all came in the second half with Mohamud having eight in the frame.

The Panthers opened the second half strong, but could never cut the deficit closer than nine. 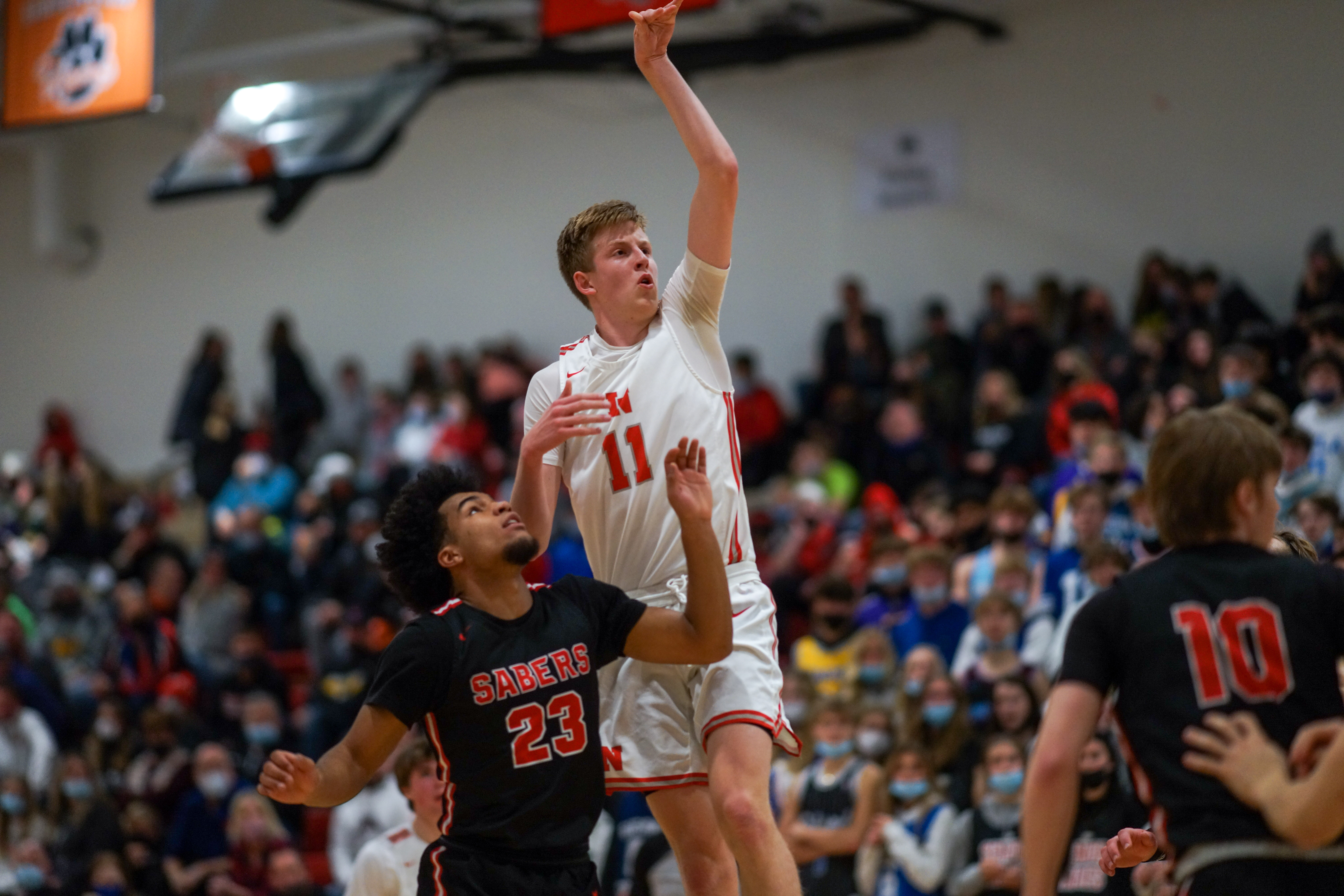 Jack Robinson (11) led the Panthers with 16 points in a loss to the Sabers in Shakopee Jan 21. Photo by Korey McDermott, SportsEngine