Mounds View hit eight first-half threes, but the Raptors stormed back to grab the win. 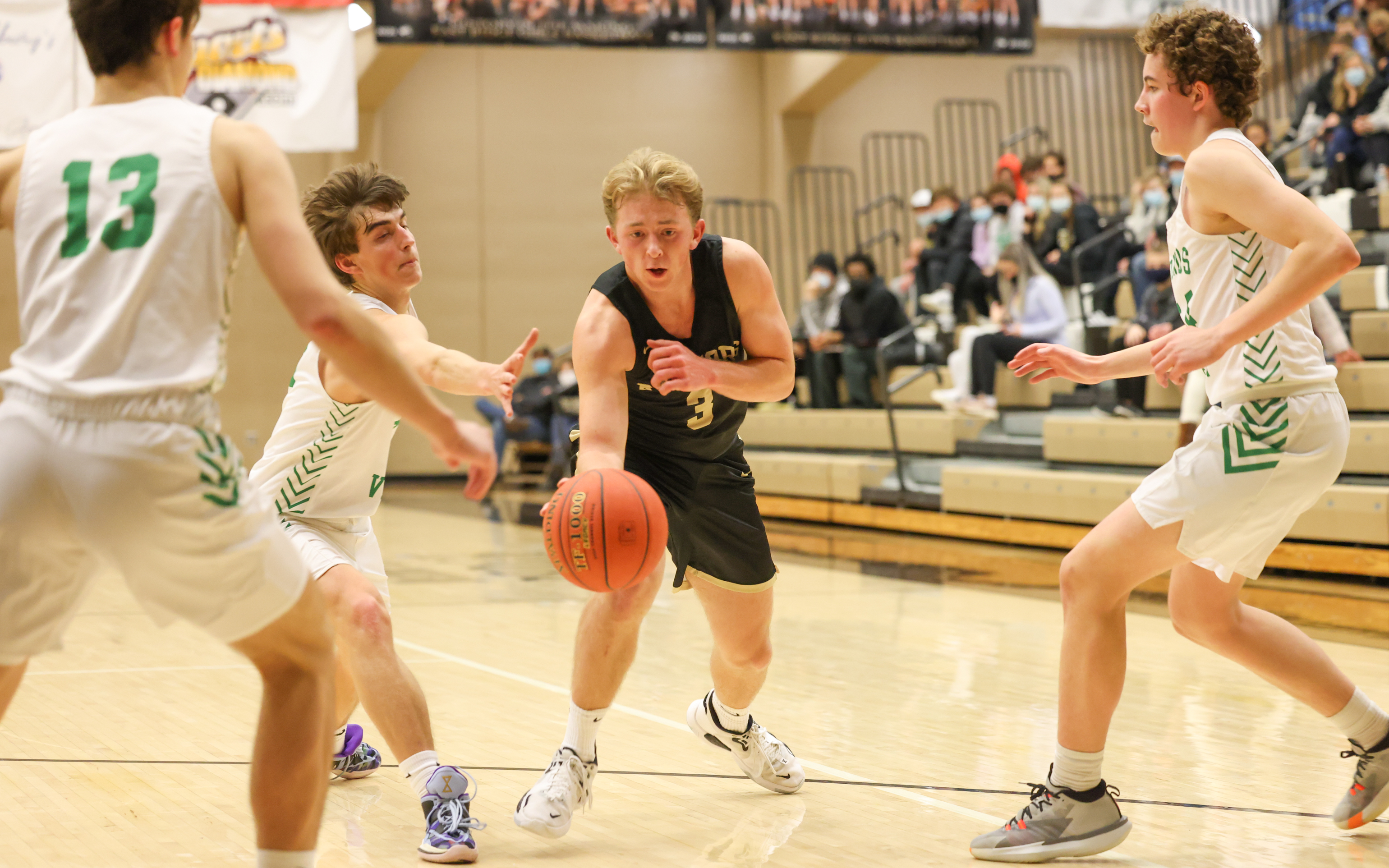 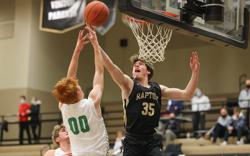 Fire and brimstone weren’t needed for East Ridge at halftime.

The Raptors and their top-10 ranked scoring offense were stuck in the mud against a pesky bunch of Mounds View Mustangs.

Trailing at home by eight points at halftime, East Ridge took heed of senior leader Kendall Blue’s cool, collected words. The Raptors came back for a 57-46 win to remain unbeaten in the Suburban East Conference.

“I just told our guys ‘We’re not out of this game. We’ve been here before; it’s nothing new. You’ve got to fight through adversity and get the job done.’ That’s really what we did and got the dub out of it," Blue said.

The Mustangs slowed down the tempo and threw the Raptors a curveball with an unforeseen 1-3-1 zone defense.

“We talked a little bit how we have to find a way. We had to grind that one out,” East Ridge coach Josh Peltier said. “We weren’t shooting the best. We didn’t see the 1-3-1 from them much this year, so we had to adjust to that pretty quickly. We just had to find a way, grind it out and get more stops.”

Adversity was surrendering eight first-half 3-pointers to Mounds View, which was without one of its top threats, senior guard Dylan Wheeler.

Mounds View coach Dave Leiser would have liked to see his team convert a few more looks in the paint, but he pointed to a variety of players stepping up to help keep the Mustangs ahead for much of the night.

“One of the things that we’re going through, that a lot of people are now with COVID; we lost Dylan Wheeler. So we really have guys who have been playing JV having to fill roles. They’re just getting comfortable. It takes a while to get comfortable,” Leiser said.

East Ridge still didn’t light the nets on fire in the second half, but it found its defensive identity.

Mounds View went scoreless from beyond the 3-point line and was held to 14-second half points.

The Raptors were also without one of their top contributors, too, 6-foot-4 junior Alex Mattes.

Those waiting in the wings were ready to ‘D’ up in his absence.

“We were without Alex tonight. That’s a huge loss. He does a lot of stuff for us,” Peltier said. “But just next man up. I thought Dane Meuler, Charlie Bern, Charlie Theis, Parker Wellmann really gave us something and a spark. They found a way and had a little fight in them.”

No other Mustangs besides Kirk scored in the first 10 minutes of the second half. They scrapped and clawed to remain in the lead until East Ridge pulled ahead, 41-39, with under seven minutes remaining.

A short back-and-forth ensued before East Ridge closed on a 13-1 run.over the last 3:58.

“It was a slow start. We came out a little flat and missed some shots early,” senior forward Carson Koch, who was one of six Raptors with five-plus points, said. “They hit from a great percentage from three in the first half that put them up big. But we have that fight. We want to win so bad. We have that brotherhood within our team. That leads us and the leaders on our team helped us push through that one.”

Leiser didn't lament the loss for long. His team will get a rematch at home on Feb. 23.

"I give them a ton of credit. Kendall Blue is an outstanding player," Leiser said. "He’s a hard guy to guard. He knows how to play the game and plays the game right. Their guys are well-coached. I thought really, it was a good high school basketball game. We just wished we had come out on top."

The Raptors, ranked No. 5 in Class 4A by Minnesota Basketball News, were victims of a buzzer-beating loss in the section finals a season ago. The veteran-laden squad is eager to build on 2021 and now have wins over top-20 Class 4A state-ranked foes: No. 4 Lakeville North, No. 6 Hopkins, No. 14 Stillwater, No. 15 Mounds View and No. 16 Irondale. Add Class 2A, No. 4 Minnehaha Academy to the resume, too.

More opportunities come next week with No. 11 and fellow conference unbeaten Woodbury, as well as No. 17 Park of Cottage Grove.

“Our chemistry is great," Blue said. "We played with each other in the fall and years before. We’re all just dogs and out to prove everyone wrong. Whoever’s sleeping on East Ridge, we’re coming for you guys.” 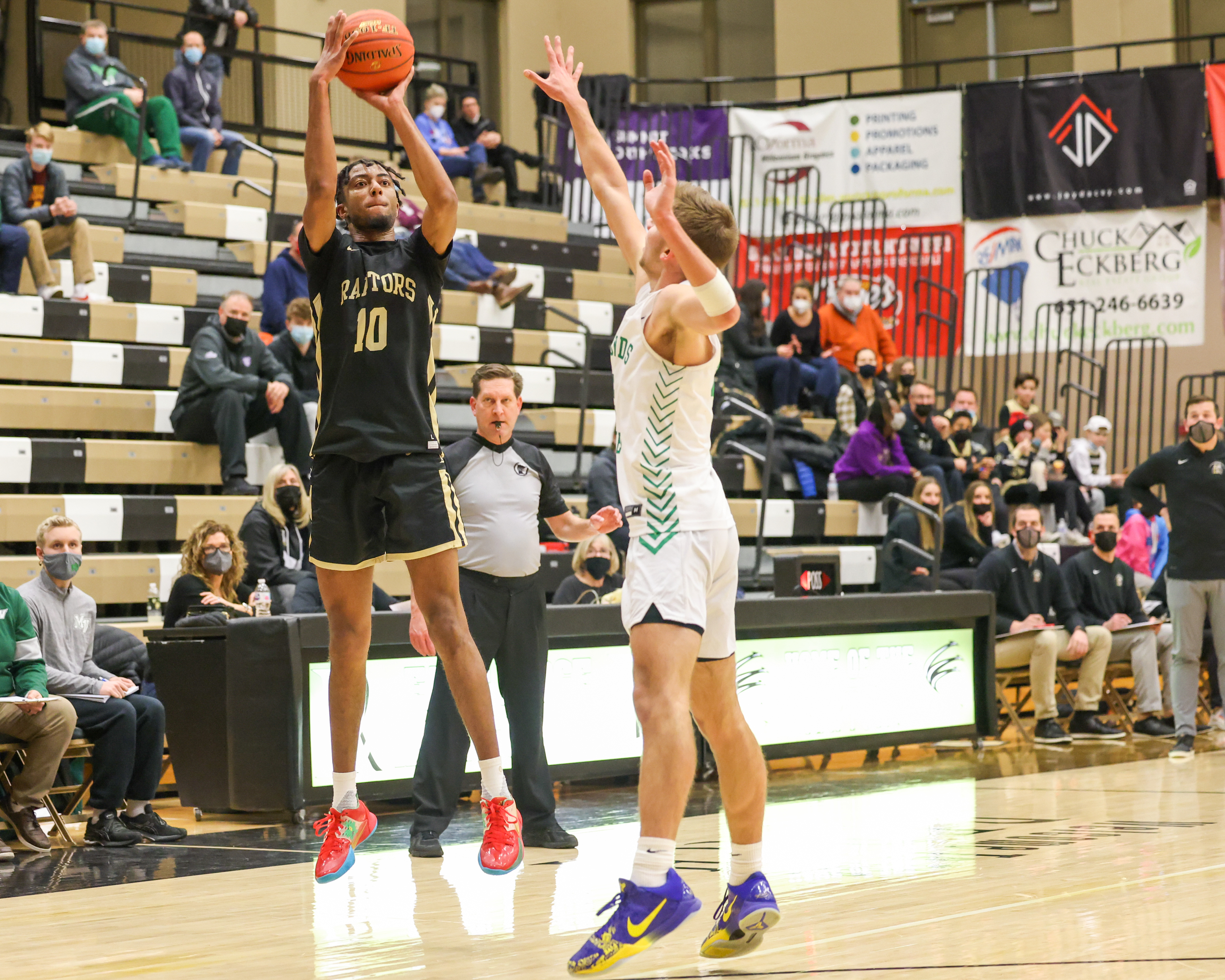 East Ridge's Kendall Blue shoots from behind the 3-point line against Mounds View Friday night. Blue finished with a team-high 17 points in the Raptors 57-46 victory over the Mustangs in Woodbury. Photo by Jeff Lawler, SportsEngine

The Raptors leaned on a co-game high 17 points from senior wing Kendall Blue. He made seven free throws in the second half to preserve the win.

After leading 11-10 early in the first half, East Ridge was down until it led 41-39 with under seven minutes remaining.

The Mustangs were led by 17 points from senior guard Kobe King. He hit two of the team’s eight 3-pointers in the first half.

Mounds View was held to 14 points in the second half on zero 3-point makes. 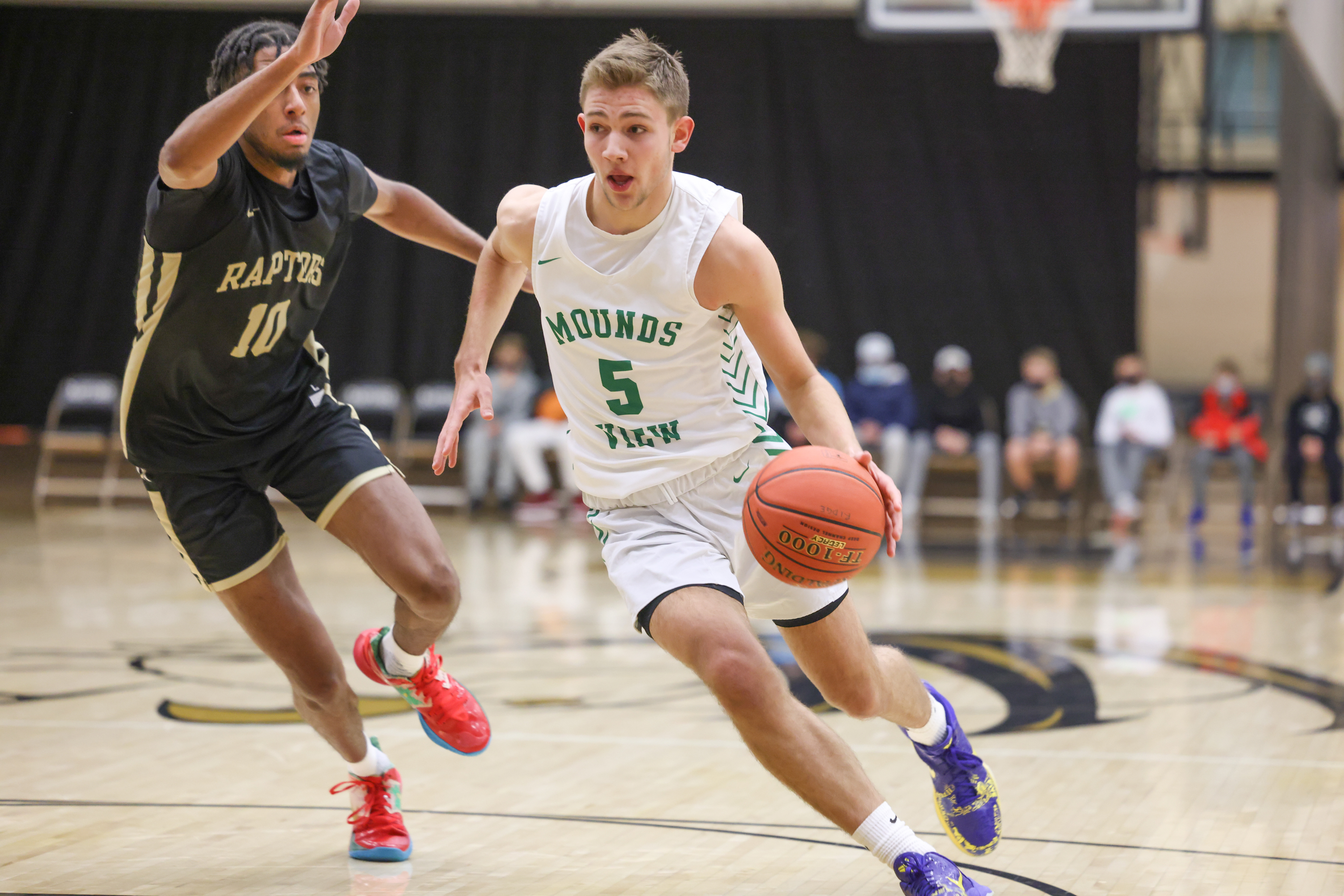 Mounds View's Kobe Kirk drives to the basket against East Ridge Friday night. Kirk had 17 points in the Mustangs 57-46 loss to the Raptors in Woodbury. Photo by Jeff Lawler, SportsEngine