A 43-point second half surged the Hylanders past the Islanders on Tuesday. 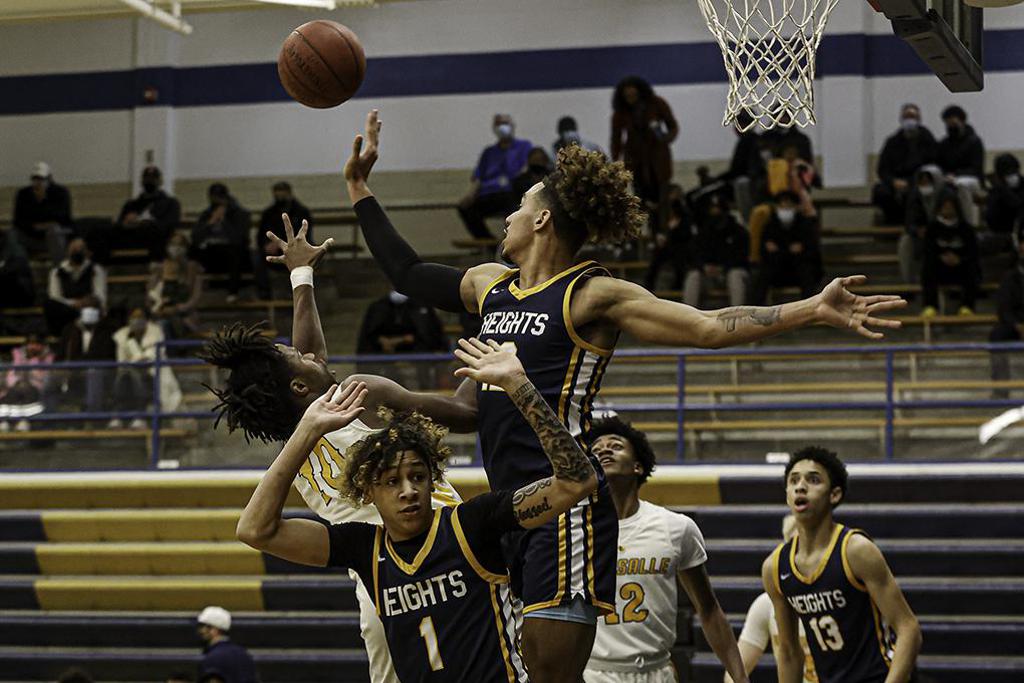 Columbia Heights coach Willie Braziel had a message for his sophomore point guard, Jency Davis, at Monday's practice: It's time to grow up.

Not physically. Braziel didn't expect Davis, who likely stands a few inches shorter than the 5-foot-10 height he's given on the team's roster, to be any bigger by Tuesday's tipoff against Tri-Metro Conference rival DeLaSalle. And not emotionally, because Davis already has proven his mettle in two previous seasons with the Hylanders' varsity.

But he did want Davis to be ready to make the big plays at the biggest moments against the best conference opponent. And that's just what Davis did, scoring all 12 of his points in the second half, taking the ball to the basket against bigger and stronger opponents, passing to teammates for easy baskets or taking the hits and making all eight of his free throws, as the Hylanders beat DeLaSalle 75-60. 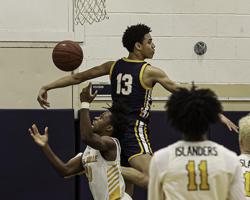 Columbia Heights left with its unblemished record (8-0, 2-0) intact and made a case for leap-frogging the Islanders in the next Minnesota Basketball News rankings. The Islanders (6-5, 2-1) entered the game ranked second in Class 3A; Columbia Heights started the day ranked sixth.

DeLaSalle held Terrence Brown (22 points) and Mujah Burton (20) below their season averages, but Davis and 6-6 senior Donnavin Hinsz stepped up against the Islanders. Hinsz scored 16 points and made his presence felt around the basket, blocking shots and grabbing rebounds.

To a newcomer, the presence of Davis at the basket was a bit of a surprise. Davis averages 6.6 assists and is counted on largely to get the ball to Burton and Brown. But after DeLaSalle took a six-point lead (38-32) into halftime, the Hylanders needed all the muscle they could get, and Davis was eager to oblige.

"He's been a player since he was little," Islanders coach Travis Bledsoe said. "He definitely made an impact."

Davis and Hinsz provided most of the scoring as the Hylanders slowly clawed their way back from the halftime deficit. But the going was tough and slow. Neither team scored in the first five minutes of the second half, and it became a free-throw shooting contest for a few minutes after that.

Then, with 12:35 to play, Burton drove to the left baseline and willed a three-point shot over DeLaSalle defender Cash Chavis, who had been on top of him most of the game, to tie the game at 42-42 and open the floodgates for the Hylanders' offense. Columbia Heights outscored DeLaSalle 43-22 in the scond half and 33-16 over the last 12 minutes.

Braziel credited his team with sharpening up its ball control while Bledsoe said his team's relative inexperience showed at the critical moments.

"Without seeing the books, I'm pretty sure we cut our turnovers by more than half in the second half," Braziel said.

Bledsoe said the difference in the second half was the Hylanders' "intensity and experience, their seniors who have been through it. They were hungrier and they outworked us."

While cutting down on their own turnovers, Columbia Heights also turned up the pressure on defense and forced more DeLaSalle turnovers. That led to a late-game scoring spree that provided the 15-point victory.

"I hope the camcorders were working good tonight," Columbia Heights coach Braziel said, "because I want Jency to see just how good he was playing."

With 8:39 to play and the Hylanders up by a point, Davis landed in a heap under the DeLaSalle basket after coming down from a rebound attempt. He did not get up for several minutes and had to be carried to the team's bench. His legs had cramped up but he was not hurt. He returned to help his team finish off the rally.

Davis apparently got the message on Monday, because he showed up big for the unbeaten Hylanders on Tuesday. 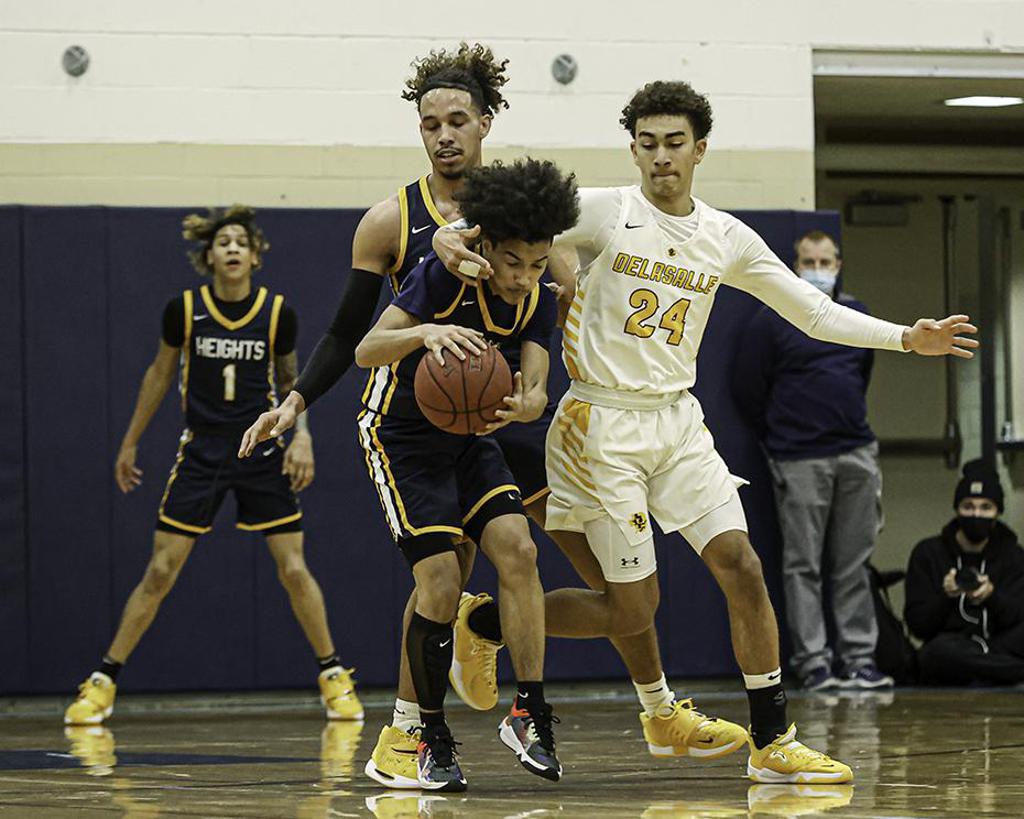 Columbia Heights sophomore Jency Davis took a hit from DeLaSalle's Myles Dillon-Parks in the first half. In the second half, Davis scored 12 points to help the Hylanders to a victory. Photo by Mark Hvidsten, SportsEngine

The Hylanders remained unbeaten in eight games and took an early advantage in the race between the two teams expected to vie for the Tri-Metro Conference title this season.

Nasir Whitlock scored 18 of his 20 points in the first half as DeLaSalle, ranked second in Class 3A by Minnesota Basketball News, built a six-point lead at the half, 38-32. But the No. 6-3A Hylanders (8-0, 2-0), behind Brown and sophomore Jency Davis, pulled even with 12 minutes to play. Twenty-five seconds later, Burton hit a three-point basket to start a 31-17 Hylanders run to end the game.

Davis scored 12 points, all in the second half while making 8 of 8 free throws. Donnavin Hinsz added 16 points for Columbia Heights.

Kyle Johnson made four three-point baskets and scored 16 points for the Islanders (6-5, 2-1) and Amir Everett added 10. 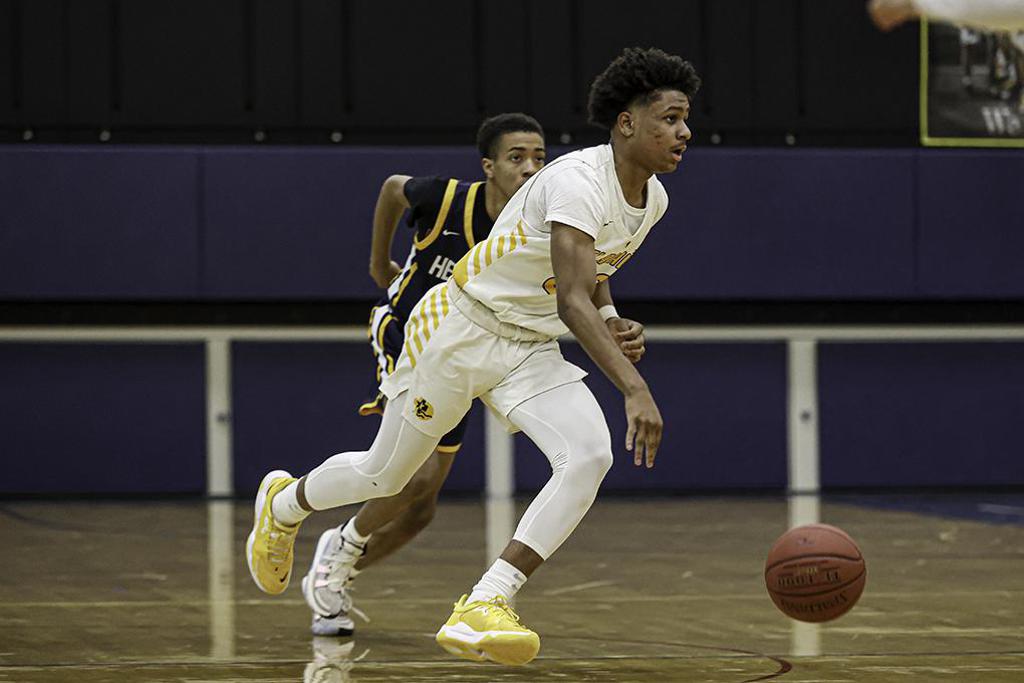 Nasir Whitlock led DeLaSalle with 20 points, 18 in the first half. Photo by Mark Hvidsten, SportsEngine