Who wins championships on Saturday?

The Star Tribune's Ron Haggstrom sizes up each of the four classes and delivers a prediction for each. 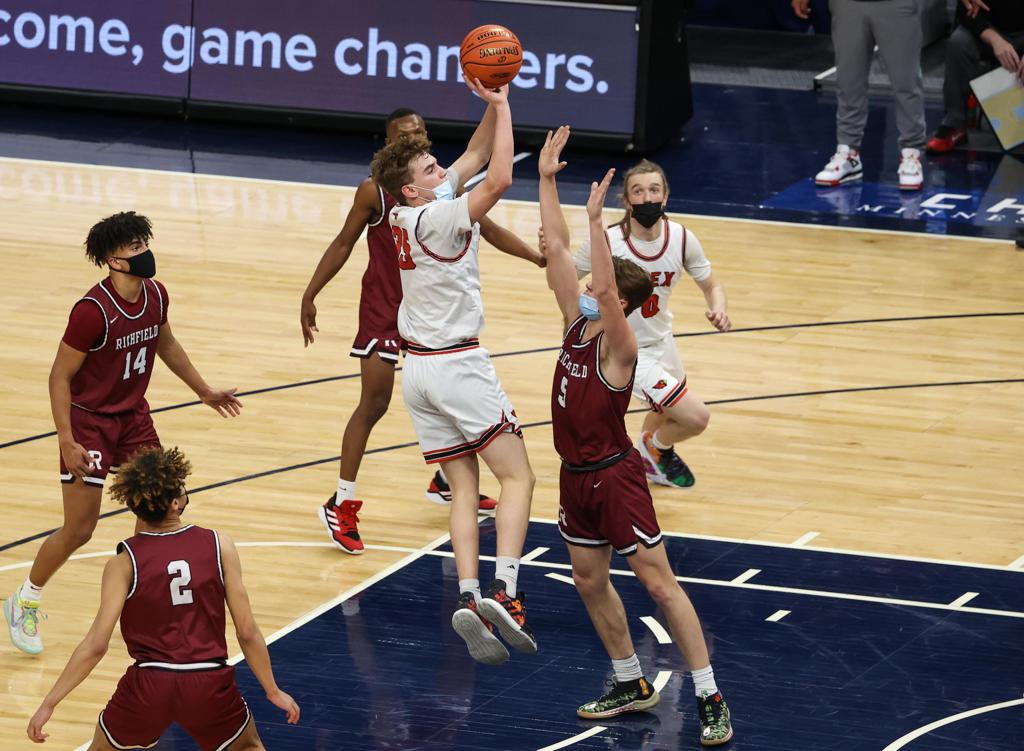 Alexandria's Trevin Hoepner (25) shot over the arms of Richfield's Ryan Miles (5) on Thursday at Target Center. The Cardinals face No. 1-ranked Minnehaha Academy for the Class 3A championship on Saturday. Photo by Cheryl A. Myers, SportsEngine

Dave Thorson returned home as a Gophers men’s assistant basketball coach just in time to see me pick against his beloved DeLaSalle. My home is 30 miles from the school on the downtown Minneapolis island, but I can hear him like I’m on the court playing for him, yelling at me for making a mistake and ribbing me about some of my picks.

My 17-7 record so far on the boys’ side is identical to my girls’ tournament picks heading into Friday’s games.
On championship Saturday at Target Center, all my chips are on these four selections.

Class 4A
Cretin-Derham Hall (18-5) vs. Wayzata (18-12), 8 p.m.
No one player has proved his value like Cretin-Derham Hall junior point guard Trejuan Holloman has this season. The Raiders started 4-4 but have since won 14 of its last 15 riding the shoulders of the state’s next outstanding point guard at the collegiate level. Wayzata has a 13-game winning streak with the most talented starting five in Class 4A. The Raiders would like nothing better than a low-scoring affair. That’s what Shakopee wanted in the semifinals against Wayzata, to no avail. The Trojans are playing too well not to win the program’s first state title since 1959. Holloman will do what he can to keep it close, but Wayzata comes out on top.

Class 2A
Caledonia (23-1) vs. Waseca (22-1), 3 p.m.
Expect an entertaining game between two heavyweights in Class 2A. The Bluejays were No. 1, the Warriors No. 3 in the final Minnesota Basketball News poll. The programs had visions of possibly meeting in this game a year ago before the pandemic ended the postseason. Caledonia, the runner-up twice in the last seven years, doesn’t want to extend that trend. Waseca was the runner-up in 2019. The Bluejays’ senior class has been building toward this moment since players were sophomores. In honor of the initial Mr. Basketball winner and former Twins third base coach Gene Glynn, the selection is Waseca.

Class 1A
Hancock (19-5) vs. Hayfield (20-44), 1 p.m.
The Owls of Hancock weren’t even supposed to represent Section 6 in the state tournament while the Vikings were one of three possibilities to come out of Section 1. Both wound up as the No. 4 seeds in the quarterfinals and here they are. Hayfield is seeking its first state championship in program history while Hancock won its lone title in 1997. Both were excellent shooting the three in the semifinals. The Owls’ 6-7 junior Matt Thompson should do well inside against the smaller Vikings. Hayfield’s ability to get out and run, and its perimeter shooting, will more than offset it. The Vikings win their first championship.