The veteran Trojans pulled away in the second half en route to a 75-61 victory over Cretin-Derham Hall. 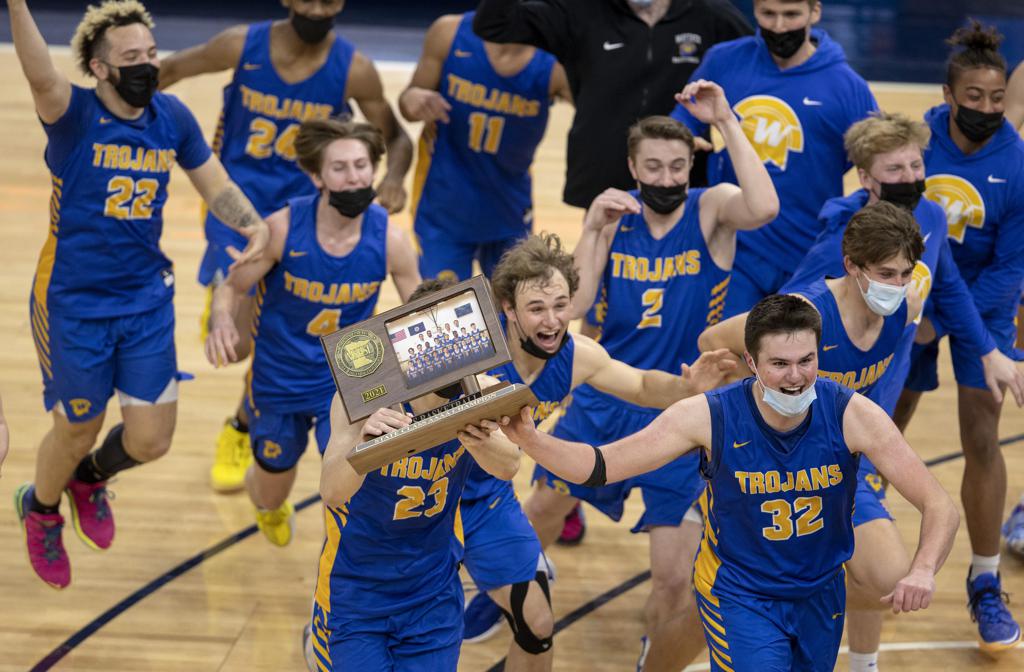 The first time Wayzata coach Bryan Schnettler saw the players he currently coaches, he recognized what they were capable of.

That potential became reality Saturday as Wayzata pulled away in the second half to defeat Cretin-Derham Hall 75-61 in the Class 4A championship game.

“When I first got here, the guys on the court tonight were in fifth, sixth, fourth grade,” Schnettler recalled. “Seven years later, I’m not the least bit surprised.”

The Trojans journey to the state title included a disappointing 11-17 record last year, which proved to be a motivating factor to this season.

“Last year was definitely tough, for sure,” senior guard Kody Williams said. “It put a chip on our shoulder.”

The versatile Trojans entered this season as a favorite in Class 4A. With a starting lineup of five talented offensive players, all that remained was for them to prove it.

They did just that at Target Center, turning up the heat after taking a 35-28 halftime lead.

“We felt good going into halftime,” Raiders coach Jerry Kline said. “They turned that lead into 44-33. They’re well-balanced and they share the ball. You have to give something up with all the weapons they have.”

Wayzata came out the second half with added vigor. Junior guard Drew Berkland, the offensive star of the semifinals, hit four three-pointers in the first 10 minutes. Junior forward Cam Heide, the focus of many college recruiters, elevated his game as well. Berkland and Heide combined to score Wayzata’s first 19 points of the second half.

When they cooled off, senior Eddie Beeninga picked up the slack. And Williams added clutch free throws down the stretch to help keep Cretin-Derham Hall at bay.

“We have five guys on the floor that can score and share the ball,” Schnettler said. “To be honest, I think we could have done that a little better.”

“Everybody gets touches and we don’t just focus on one guy,’’ he said. “We complement each other really well.”

The Trojans had four players in double figures, led by 19 points from Berkland and 17 from Heide. Beeninga added 16 and Williams 11.

After the game, Schnettler spoke of the fulfillment of seeing the culmination of what began years ago.

“You don’t do it for the winning and the state championships. You do it to see these kids grow and create memories and friendships,” Schnettler said. “That’s what this is all about and it’s really fun to see that happen.”

The question was asked all season: Was Wayzata -- a deep, talented veteran team -- the best in Class 4A?

The answer was an emphatic yes on Saturday after the Trojans pulled away from Cretin-Derham Hall in the second half en route to a 75-61 victory in the Class 4A championship game.

As has been their reputation all season, the Trojans won with balance. Four players scored in double figures, led by Drew Berkland’s 19 points and Camden Heide's 17 points to go with 10 rebounds.

Blessed with a number of offensively gifted players, Wayzata has a defense that is often overlooked. The defensive standout for Saturday was senior guard Kody Williams, who pressured Cretin-Derham Hall’s standout guard Trejuan Holloman all game. Holloman scored 20 points, but had work for every one and was never able to get the Raiders into a rhythm offensively.

After the game Wayzata coach Bryan Schnettler talked about leading the team through a season that culminated with the school's first boys' basketball state title in 62 years.

“You don’t do it for the winning and state championships. You do it to see these kids grow and create memories and friendships,'' he said. "That’s what this is all about and it’s really fun to see that happen.”

Ranked No. 9 in the final Class 4A poll, Cretin-Derham Hall came out determined to let Wayzata know it planned to give the Trojans a battle. The Raiders took a quick 6-2 lead on consecutive three-pointers.

Wayzata tied it up soon after and the teams spent much of the first half trading baskets. The Trojans’ depth began to make a difference as the half wore on. Four different players scored between six and nine points before halftime as the Trojans finished the first half on a 7-2 run to take a 35-28 lead into halftime.

Wayzata, finding avenues to penetrate the lane and getting good looks at the basket, shot 63.6% from the field, making four of eight three-pointers. The Trojans outscored the Raiders 20-12 on points in the paint.

Holloman kept Cretin-Derham Hall close with nine points and four assists in the first half.

Williams had nine points and 6-9 forward Carter Bjerke, scoring inside and out, had eight for Wayzata in the first half.

The second half was largely the Berkland and Heide show for Wayzata. The duo combined to score the first 19 points of the half, with Berkland, a 5-11 guard who was the star of the game for the Trojans in their semifinal victory over Shakopee, hit four three-pointers in the stretch.

Cretin-Derham Hall tried to rally behind Holloman’s ability to drive and dish, creating contact. At one point in the second half, the Raiders had scored 10 consecutive points from the free throw line.

Problem was, at the same time the Raiders were adding a point at a time, Wayzata was adding threes. The Trojans hit eight three-pointers in the second half and built the lead to as many as 19 points.

The victory gave Wayzata a 19-2 record for the seasonn. Cretin-Derham Hall, which began the season 4-4, finished 18-6.