Also from the girls' and boys' tournaments: Richfield's bond with a superfan, Chaska reloads, Minnehaha injury update and Providence ties to the pros. 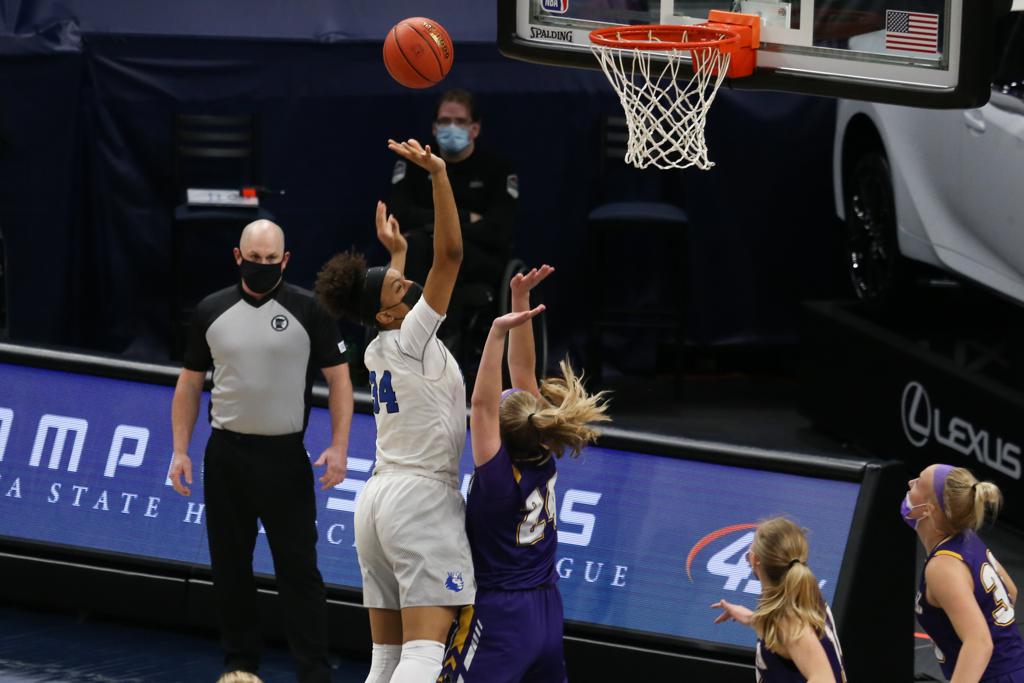 Hopkins' Maya Nnaji put up a shot against Chaska in the Class 4A semifinal Wednesday. She blamed herself for streak-ending loss. Photo: Jeff Lawler, SportsEngine

The 6-4 junior and Star Tribune Metro Player of the Year said her uncharacteristically subpar play was the biggest reason for the loss.

“I want to take ownership of this loss,” she said Thursday. “I feel like my play was the big reason why we lost. I didn’t step forward and do my part, do my role. I felt really bad about it. I apologized to the team.”

Nnaji, who averaged 19 points per game, scored only nine against the Hawks. She was held scoreless in the first half after sitting out for an extended period because of foul trouble.

She speculated that the Royals’ regular season, full of overwhelming victories and lacking many close games, hurt them down the stretch.

“We wear the Hopkins jersey with pride and we expect to win,” she said. “We played like we felt we could keep making mistakes and still come out on top. And I chose the wrong game to not be at the top of my game.”

She expects the loss to motivate the Royals, who return their entire rotation of starters and substitutes.

Richfield reciprocity
Richfield boys’ basketball superfan Joe Carr attended Thursday’s 55-53 loss to Alexandria in a Class 3A boys’ semifinal at Target Center, a No. 54 jersey hanging over the back of his wheelchair.

Carr, a senior with cerebral palsy, participates in adapted soccer and floor hockey. Members of the basketball team have returned the favor and supported Carr at his athletics events.

“It gets back to our ‘Team before me’ philosophy,” McMillan said. “He’s been a huge part of our success. Before every game, he gives us a shout out on social media.”

Prepared Chaska reloads
Chaska forward Mallory Heyer was restless Wednesday night. She had too much residual energy left after the Hawks’ upset of Hopkins.

“I had a lot of trouble sleeping,” she said. “It was such a great feeling, beating the No. 1 team in the nation. My phone’s been blowing up. Everyone’s super excited.”

The state tournament’s revamped format might have worked in Chaska’s favor. More than a week had passed since the Hawks defeated Stillwater 75-57 in the quarterfinals, giving them plenty of time to prepare.

“We had a lot of practice time to get ready and each day, we took steps forward,” said Heyer, a 6-1 junior who has committed to the Gophers. “The whole time, our coach [Tara Seifert] kept preaching we could do this.”

Now the Hawks are focusing on getting ready to play Rosemount in Friday’s Class 4A championship game.

"When we walk into practice [Thursday], we’ll put last night’s win behind us,” she said. “It’s time to take care of business.”

Redhawks injury update
Minnehaha Academy’s Prince Aligbe, an explosive 6-6 junior wing who is considered a top-two recruit in the Class of 2022, was in street clothes on the bench Thursday during the Redhawks’ 79-58 Class 3A boys’ semifinal victory over DeLaSalle.

Aligbe, who has battled leg injuries all season, was out because of an ankle injury. The injury was categorized as day to day.

With Aligbe out, senior guard Donovan Smith, who had missed most of the season because of a broken non-shooting hand, stepped in.

“Having Donovan back with Prince out was incredible timing,” Minnehaha Academy coach Lance Johnson said. “Donovan really helps us spread the floor and improves our three-point shooting, which was one of our weak spots.”

A 7-footer who played at Oregon State, Mel Counts helped Team USA to a gold medal in the 1964 Olympic Games in Tokyo. He played for four NBA teams before retiring in 1976.