Thirty candidates were announced by the state coaches' association on March 16. The finalists will be revealed at the end of the month. 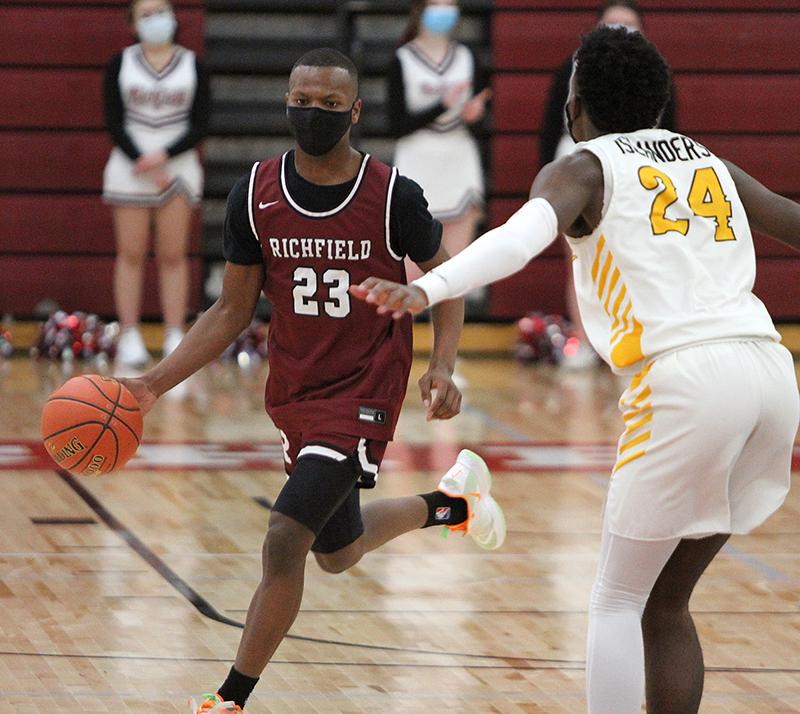 Lamar Grayson (23), Richfield's leading scorer this year, was one of two Spartans to make the 2021 McDonald Award semifinalist list. Finalists will be announced March 30. Photo by Drew Herron, SportsEngine

The 2021 McDonald Award semifinalist list was released by the Minnesota Basketball Coaches Association on Tuesday. Thirty nominees were chosen for the honor, which is bestowed upon the state’s top senior player at the conclusion of each season.

Upstart Richfield, ranked No. 4 in the final Class 3A rankings by Minnesota Basketball News this season, is represented by Lamar Grayson and Ryan Miles. Grayson has been the Spartans’ top scorer this year, producing 23.9 points a game. Miles has complimented with 13.8 points a contest, helping Richfield put up an overall record of 13-4 while playing in the Tri-Metro Conference.

The top-ranked Class 3A team, Minnehaha Academy, also features a semifinalist in Chet Holmgren. The 7-foot-1 center is regarded as the nation’s top recruit, according to ESPN, averaging 20.2 points per game for the Redhawks.

Will Tschetter of Stewartville, the state’s top scorer this winter with 553 total points, also made the cut. Tschetter has helped his Tigers to eight victories in their last nine games and scored 30.7 points a game during the regular season.

The McDonald Award is not to be confused with Minnesota’s Mr. Basketball honor. Patterned after the Wooden Award, which is given annually to the nation’s top Division I player in both men’s and women’s basketball, the state coaches’ association takes into account a list of criteria when choosing who receives the McDonald Award. Criteria in selecting a recipient includes overall performance throughout the season, strength of character, both on and off the court, whether a player excels at playing both offense and defense, and their respective contribution to team effort.

Finalists for the honor are expected to be announced on March 30.

The McDonald Award, which is now in its fourth season, was bestowed upon Jalen Suggs of Minnehaha Academy a year ago. Suggs now plays at Gonzaga, where he averages 14 points, 5.5 rebounds and 4.5 assists per game. The other previous winners are Matthew Hurt and Tre Jones. Both went on to collegiate careers at Duke, with Hurt coming off a stellar sophomore campaign producing 18.3 points a game prior to the Blue Devils’ season ending unexpectedly due to COVID-19 concerns. Jones, meanwhile, exited Duke early to start a pro career, as he was selected by the San Antonio Spurs in the second round of the 2020 NBA Draft.

See the table below for the complete list of semifinalists, who are presented in alphabetical order by school.