A top junior recruit in basketball and football, the likeable point guard exudes a team-first approach and a drive to be a better person in all aspects of life. 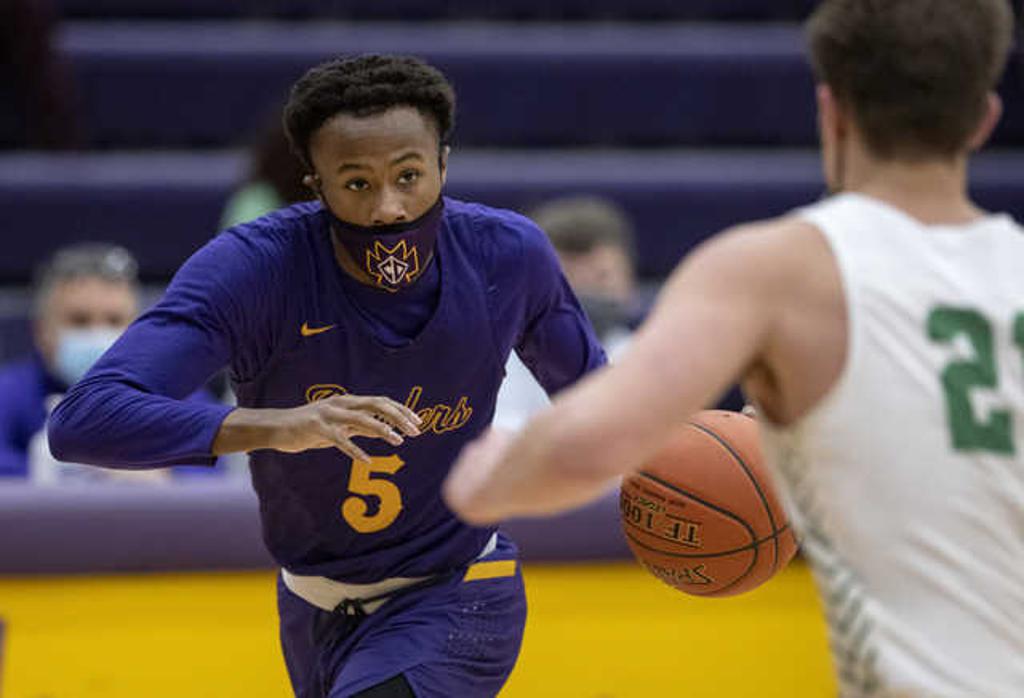 Tre Holloman of Cretin-Derham Hall drove with the ball in a recent game against Mounds View. He finished with 21 points, 12 assists and 11 steals. Photos: Carlos Gonzalez * carlos.gonzalez@startribune.com

Before his ninth-grade year, Tre Holloman was making the rounds, checking out potential schools.

He had played basketball for Minneapolis North as an eighth-grader, wowing fans with his quickness and flair for passing, leaving an impression that the Polars had another budding superstar in their midst.

But Holloman never attended the school. He was still attending Franklin Middle School, suiting up for the Polars through a working agreement between city middle schools and high schools.

When it came time to choosing a high school, his parents — former University of Minnesota guard Crystal Flint and husband Andre Lanoue — were determined to get Tre a private school education.

“We made a decision to go the private school route,” Flint said.

They checked out Minnehaha Academy and DeLaSalle in Minneapolis, and went across the river to Cretin-Derham Hall, which was fresh from its 2018 Class 4A state championship.

“I felt more comfortable about Minnehaha Academy,” Flint said. “But he chose Cretin. I asked him why and he said ‘Mom, they like me there. The kids there wanted me to go to their school.’ ”

Although he had strong connections with players from each of the other schools, Holloman said the decision was easy,

“The kids there, that environment, it was all positive,” he said. “They wanted me to be a part of the Cretin-Derham Hall family.”

Two years later, the 6-2 junior point guard is one of the most highly sought-after athletes in the state.

He has double-digit Division I offers from colleges trying to woo him not only in basketball but also football, where he shines as a defensive back prospect. Holloman is inundated with recruiting questions and the focus of constant speculation, but Holloman brushes it off.

He’ll have to address the issue soon, he knows. But for now, he’s satisfied with what he is — a popular student athlete and friend to many.

“This is my home,” he says assuredly. “I made the right decision.”

Spreading energy, involving teammates
Holloman is skipping, he’s clapping his hands, he’s running up to teammates to give them high-fives. It doesn’t matter much what happened on court mere seconds ago, good or bad. In his world, his job is to make sure everyone else in it is comfortable and confident enough to do their jobs well. A point guard at his most basic.

On Feb. 23, Holloman led the Raiders to a statement victory over previously undefeated Mounds View, avenging a loss in the first game of the season. The way Holloman sees it, things always go better if his teammates are happy. So he made a point of getting them involved early, his endless energy spreading throughout the team. Mistakes were brushed off with a slap on the back as Cretin-Derham Hall answered one challenge after the other. 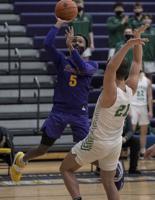 “I want my teammates to feel comfortable playing with me,” Holloman said. “So I help them get theirs first, then I get mine.”

Cretin-Derham Hall coach Jerry Kline said, “When he’s doing that, you’re seeing what leadership is. He’s getting guys involved, getting them to understand their roles and doing it a positive manner. He’s so emotional, so passionate, that it rubs off on everyone else. His enthusiasm, his exuberance, it affects the whole team.”

The Raiders closed out a 77-60 victory, extending their longest winning streak of the season to four. With an explosive first step, a slinky, slashing style and highly developed basketball IQ, Holloman finished with a triple-double — 21 points, 12 assists, 11 steals.

“He can take over a game in so many different ways,” said assistant coach Tony Yazbeck, who has also worked with Holloman through the Howard Pulley AAU basketball program. “He’s so physically gifted and understands the game so well.”

Team player at young age
With a passion for basketball starting when she was youngster growing up in Boston, Crystal Flint didn’t take long to recognize the same feelings in her youngest son.

“I knew right away he had a special interest in basketball, when he was 2, 3 years old,” she said, recalling a toy hoop she purchased for Tre, whose full name is Trejuan. It was always in use. “He spent hours playing on it.”

At age 4, he began to follow his mother and older brother Marquis to basketball camps, where he would everything asked of the bigger kids, and do them well.

“He’d do all drills. The other kids would shoot on 10-foot rims and he would, too,” Flint said. “The other parents would come to me and say, ‘Wow, that kid is special.’ ”

But playing basketball wasn’t just about dribbling and shooting. For Holloman, it was as just as much about those around him. If they weren’t having fun, neither was he.

“When I was young, I used to play for a team and the coach, Robert Grace, used to always talk about team,” Holloman said. “And I used to watch [former NBA point guard] Rajon Rondo play all the time. That made me a team player.”

Chauncee Hollingsworth, a former college player at North Central University in Minneapolis and now the founder and CEO of Hoops and Christ, an inner city outreach program, has worked with Holloman since he was in third grade.

Hollingsworth said Holloman’s insistence on being a team-first player is vital to his identity.

“He’s very driven and is always trying to achieve bigger things, but his passion is also for people,”  Hollingsworth said. “He has such a big heart. People just love being around him.”

Hollingsworth said Holloman took it to heart when he heard grumblings that Cretin-Derham Hall would struggle this year.

“He told me that no matter what happens, he was going to do everything he could to make his teammates better,” Hollingsworth said. “His passion for playing like that is contagious and he’s been doing it for years. For him, it’s so much more than just a game.”

To work on: Being better
Holloman knows he has time left before deciding on a college. Most observers expect him to commit to basketball, although he won’t say if he’s ready to give up football yet. If he had his way, he’d play both in college.

“I love football so much,” he said. “Your teammates and Friday night lights and all the people in the stands. It’s so much fun.”

His mother recalled with a laugh, “When he was younger, he used to say he wanted to play basketball at one school and football at another. I had to tell him it doesn’t work that way.”

Flint and Lanoue have worked hard to keep Holloman grounded and focused on life’s important issues. They refuse to point him in a specific direction, preferring to let him make choices for himself, and concern themselves with developing his character rather than his crossover dribble.

“We tell him ‘Don’t get caught up in rankings’ and stuff like that. Don’t fall into that trap,” Flint said. “You are who you say you are, not whom someone else says you are.”

His humble demeanor has won over his classmates at Cretin-Derham Hall.

“Even the kids who don’t play sports, they all seem to like me,” Holloman said. “It’s the family atmosphere here. My mom always says to just be myself. So I try to be very friendly. I want to be the best person I can be.”

Holloman is considered the No. 1 or No. 2 basketball recruit in Minnesota for the Class of 2022, depending on which scouting service you read. He was recently ranked as the No. 1 football prospect in the state among next season’s senior by 247sports.

Recruiters and bloggers and basketball junkies constantly debate his worth, breaking down his strengths, weaknesses and areas for improvement.

Asked what skills he needs to work on before he gets to college, Holloman pauses before providing a response that sums up his innate desire to give back to those around him.