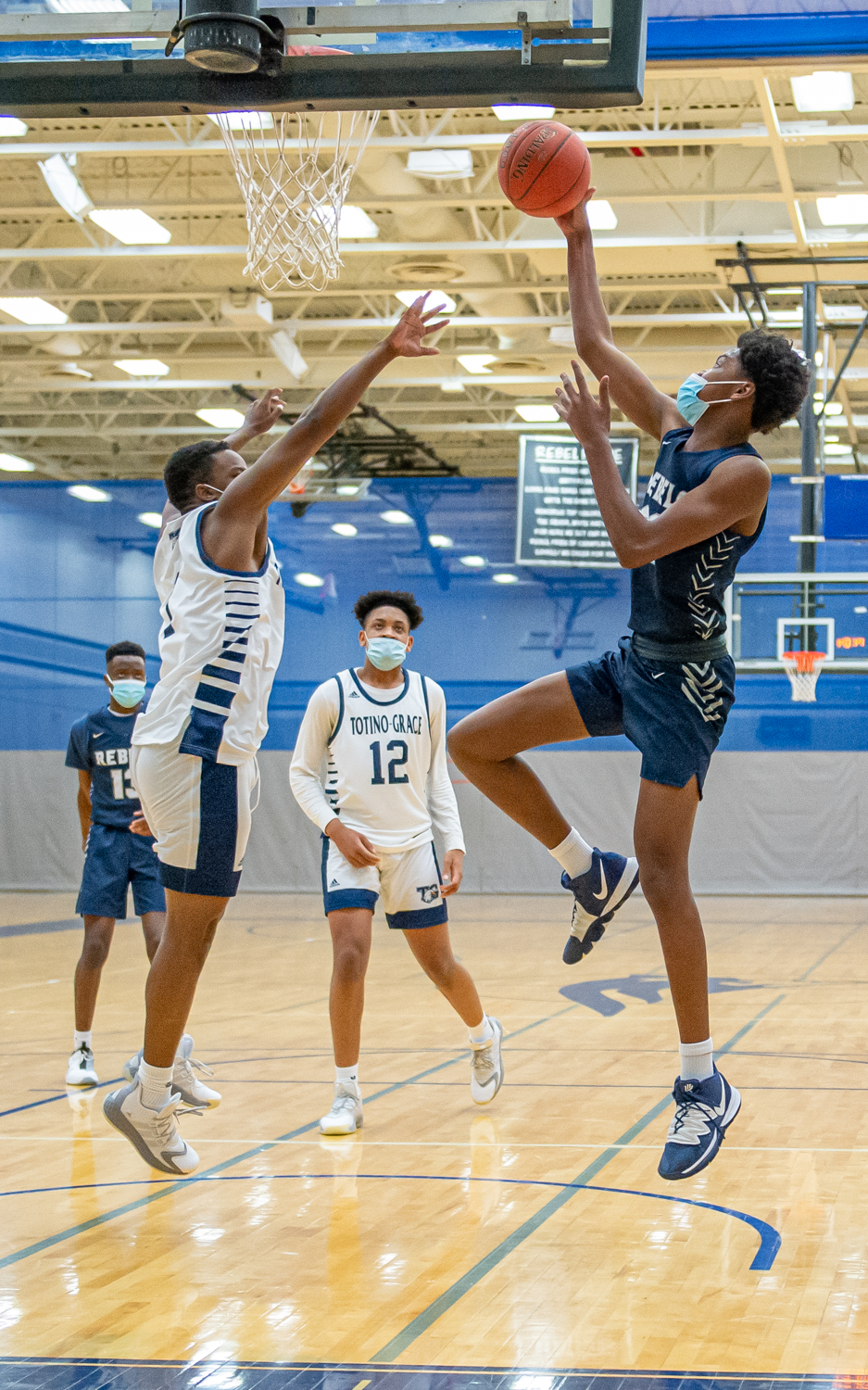 Champlin Park’s Dylan Gichaba (right) goes for a layup in the second half Thursday night. Gichaba had 18 points in the Rebels' 75-65 home victory over the Eagles. Photo by Earl J. Ebensteiner, SportsEngine

Prior to Thursday’s game, Champlin Park coach Mark Tuchscherer was honored with a game ball as the school celebrated his 300th win, which came Feb. 5 when the Rebels defeated Blaine.

How Tuchscherer’s squad performed against Totino-Grace Thursday is a prime example of how the coach and his teams have prospered in his 15 seasons. Led by a veteran attack, Champlin Park passed its toughest test of the season thus far with a 75-65 home defeat of Totino-Grace, ranked No. 2 in Class 3A by Minnesota Basketball News.

Looking at Tuchscherer’s win total, it’s easy to point to his success. His team most recently made Class 4A state tournament appearances in 2017 and 2015 before that, and produced players such as McKinley Wright. The 2017 Mr. Basketball is in his senior year at the University of Colorado Boulder and has been named first-team All-Pac 12 conference each of the past two seasons.

“It’s all about the boys and the community,” Tuchscherer said. “These boys have decided to stay home and play for Champlin Park all these years. The players have just been outstanding. Every day has been special with the boys of Champlin Park.”

At first glance, this year’s No. 1-4A Rebels look capable of matching success found by previous Champlin Park squads, as they're off to a perfect start this winter. Prior to Thursday, the Rebels (9-0) had an easy start to the season, outscoring their opponents by just over 20 points a game.

Things didn’t look like they’d come quite that easy for Champlin Park early on Thursday. The Rebels battled with Totino-Grace (7-2) and grabbed the lead, thanks in part to senior forward Francis Nwaokorie, who had 10 points in the first half.

At 6-foot-7, the University of California San Diego commit is a force in the front court against any opponent. His size and physicality was on display against the Eagles, as the senior posted 16 points and 15 rebounds.

“Francis draws double teams and triple teams every game,” said Champlin Park senior guard Dylan Gichaba. “As long as we space the floor and cut off of him, we should be all right.” 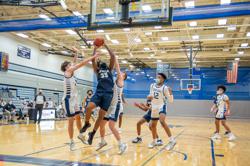 With opponents looking to try and stop Nwaokorie, his teammates prosper with more room on the floor to work with. During the second half, Gichaba was the beneficiary of some double-teams of Nwaokorie, allowing him to tally 16 second-half points to finish with a team-high 18 points.

“What makes a good team great is that ability to share the ball,” Tuchscherer said. “Dylan’s had that ability to do other things when he doesn’t score. Tonight, he was able to get free on the baseline and our guys found him.”

Though there are eight seniors on the Champlin Park roster, Nwaokorie, Gichaba and Joshua Strong are the three seniors who come in as the most experienced Rebels. Nwaokorie and Strong started last season while Gichaba served as a key player off the bench. Despite an early knee injury against Totino-Grace, Strong pushed through and tallied 16 points.

“This group of guys have gelled and stepped up,” Tuchscherer said. “They’ve done an outstanding job.”

This senior group is one of many Tuchscherer has now coached over the years. Sitting at 302 career wins, he appears to have a veteran group of players who are ready for success and are also appreciative of their coach.

“Every day [Tuchscherer] prepares us not only on the court,” Gichaba said. “He’s preparing us for the next level of basketball and life. We were happy to get him that 300th win.” 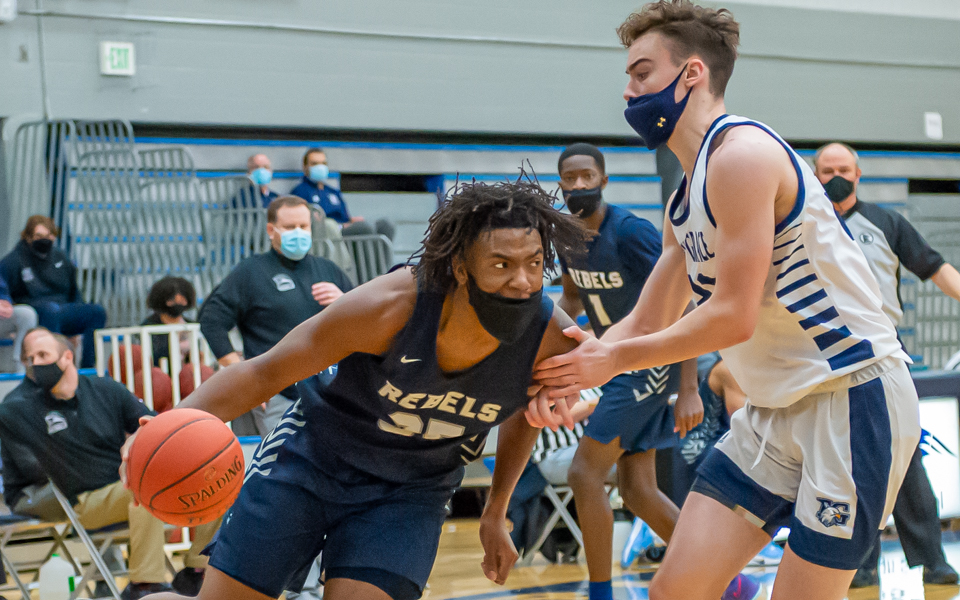 The Rebels’ Francis Nwaokorie (left), who had 16 points in the game Thursday, drives for the basket in the Rebel’s 75-65 defeat of the Eagles at home to remain undefeated. Photo by Earl J. Ebensteiner SportsEngine

In the first half, the Rebels, ranked No. 1 in Class 4A by Minnesota Basketball News, relied on their front court to produce offense in the form of senior forward Francis Nwaokorie. The University of California San Diego commit had 10 points in the first half and finished with a double-double, as he poured in 16 points to go along with 15 rebounds.

Champlin Park senior guard Dylan Gichaba found the scoring touch following a two-point first half, adding 16 points in the latter half to help the Rebels (9-0) stay unbeaten and atop the Northwest Suburban’s North Division.

The Rebels also received a double-digit contribution from senior guard Joshua Strong, who had 16 points.

The No. 2-3A Eagles came in with just one loss on the season and a first-place spot in the conference’s West Division, but they couldn’t overcome their Class 4A opponent.

Totino-Grace (7-2) got a team-high 13 points from Taison Chatman and 12 points from Patrick Bath. The Eagles also got 11 points from Demarion Watson and CJ O’Hara chipped in 10 points. 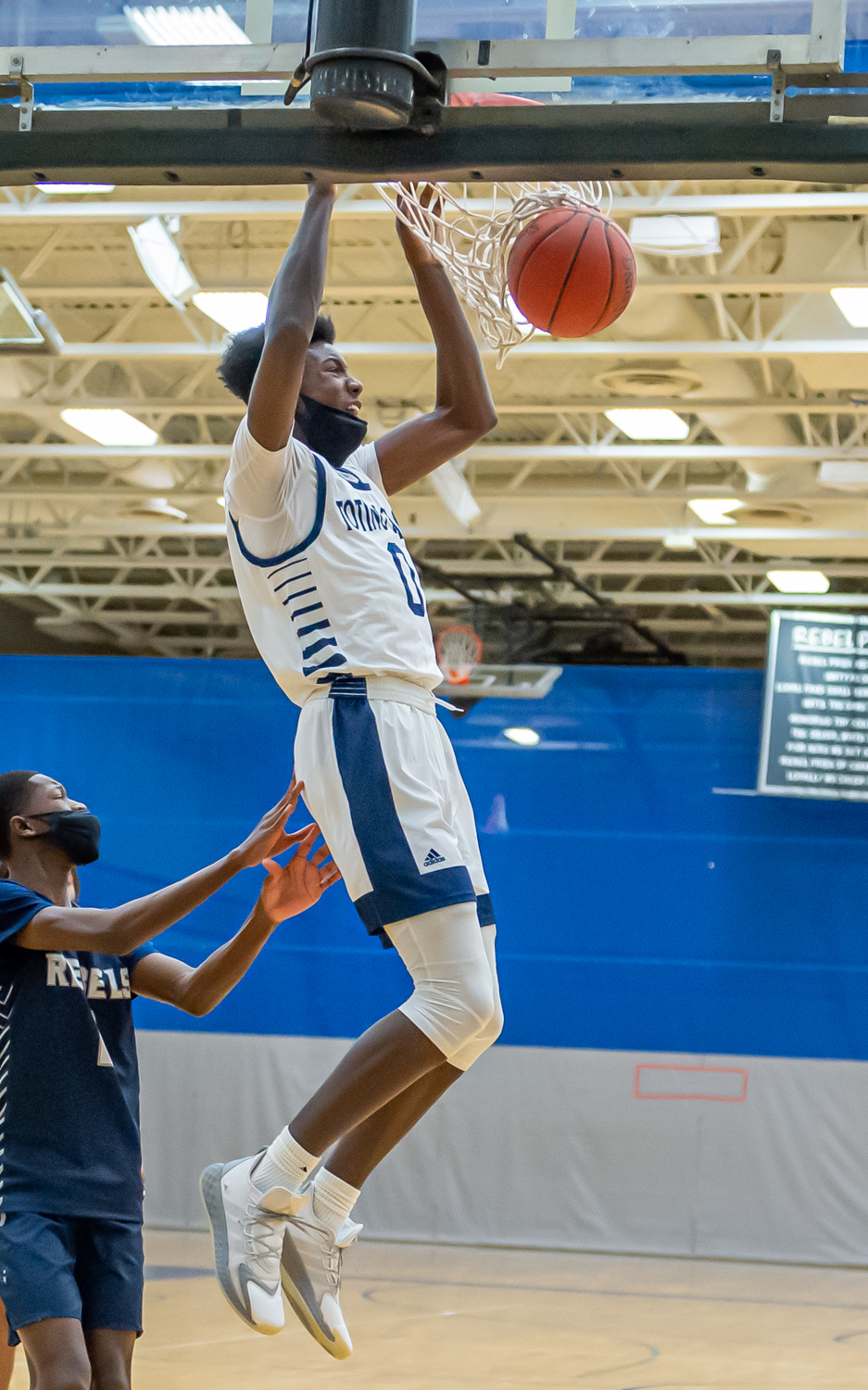 The Eagles’ Demarion Watson goes up for a slam dunk in the first half Thursday. The Eagles fell to the rival Rebels 75-65 at Champlin Park. Photo by Earl J. Ebensteiner, SportsEngine