Kobe Kirk powered the Mustangs to victory with 20 points, including a game-high four three-pointers. 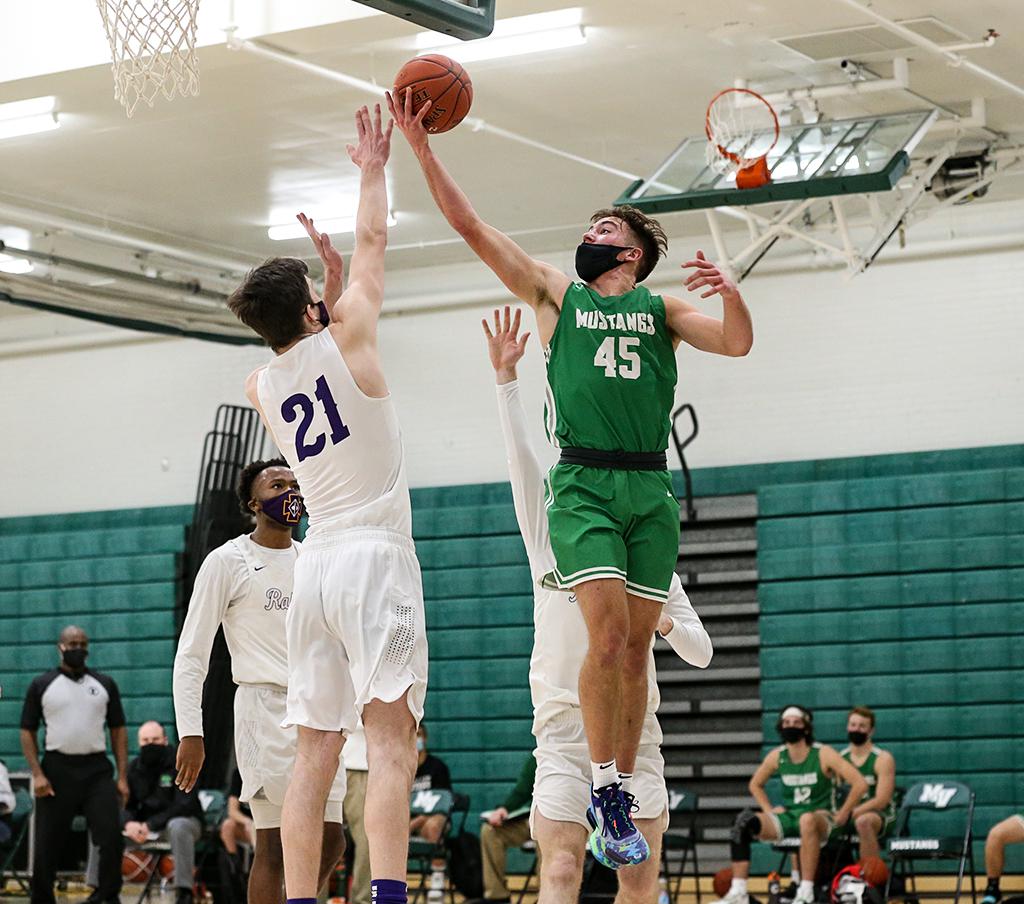 Mounds View's Dylan Wheeler (45) lays the ball up over Cretin-Derham Hall's Jack Plum (21) in the second half. The Mustangs opened the season with a 64-51 win over the Raiders on Friday night. Photo by Cheryl A. Myers, SportsEngine

It was a strong opening statement to start the season for Mounds View.

The Mustangs, a team that went 20-7 a year ago that has top returning players, raced out of the starting gate against Suburban East Conference rival Cretin-Derham Hall Friday night. Mounds View held off a late surge from the Raiders to claim a 64-51 victory in Class 4A matchup Friday night at Mounds View High School.

The home team led by as many as 14 points in the opening half, and more importantly, according to Mustangs coach Dave Leiser, finished the half strong with a 35-22 advantage.

“What I was most proud of was that [Cretin-Derham Hall] did come back, and then we went on a run at the end of the half,” Leiser said. “We always feel like the end of the first half, start of the second half are two of the most important parts of the game.” 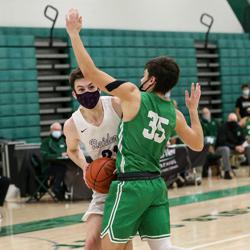 That resilience continued into the latter half, when the Raiders mounted a comeback. After Tre Holloman made a jumper, Cretin-Derham Hall (0-1) had trimmed the lead to 47-43 — the closest it had been since the game’s opening minutes.

Moments later, Dylan Wheeler and Kobe Kirk hit back-to-back three-pointers for Mounds View (1-0), pushing their team’s lead back to 10 points, and putting the pressure back on the Raiders, before ultimately pulling away.

“Everyone is always working together to get the best shot we can get,” Wheeler said. “Me and Kobe hit a couple big shots.”

The 6-foot-2 guard finished with eight points and six rebounds, anchoring the Mustangs throughout the contest.

“We knew it was going to be a tough game. We have never beaten Cretin in my last two years,” Wheeler said, adding new guys stepped up when they needed to and that everyone came together in the end.

Mounds View was powered by Kirk’s 20 points. The 6-foot-3 junior made four of five three-pointers and hit a couple of shots late to put the game out of reach.

“They went on a few runs, I think we did a great job of not letting that get us down,” Kirk said, adding he has some high goals for this year’s team. “I have a big lofty goal right now, but I think just the small things, like going on a run — plus five [defensive] stops in a row — those are the types of goals that need to be done.”

Leiser wants his team to take things one step at a time this winter, but understands the importance of a big win to start the season.

“We consider every game a blessing. We have high expectations for our team because we have a lot of guys that have paid a heavy price, so they’ve earned the right to consider themselves a good team,” Leiser said.

Mounds View looked like a good team Friday. For the most part, the Mustangs shut down the Raiders, who were led by Holloman’s 16 points. Forward Jack Plum chipped in 15 points and six rebounds.

The Mustangs’ victory is meaningful, according to Leiser. Not only was it a good way to start the season, it also brings memories.

“It means a lot to our guys, and really to our community, to come out and play so well,” he said. “We talk a lot in our program about memories and moments; this will be one of those moments that they’ll remember forever.” 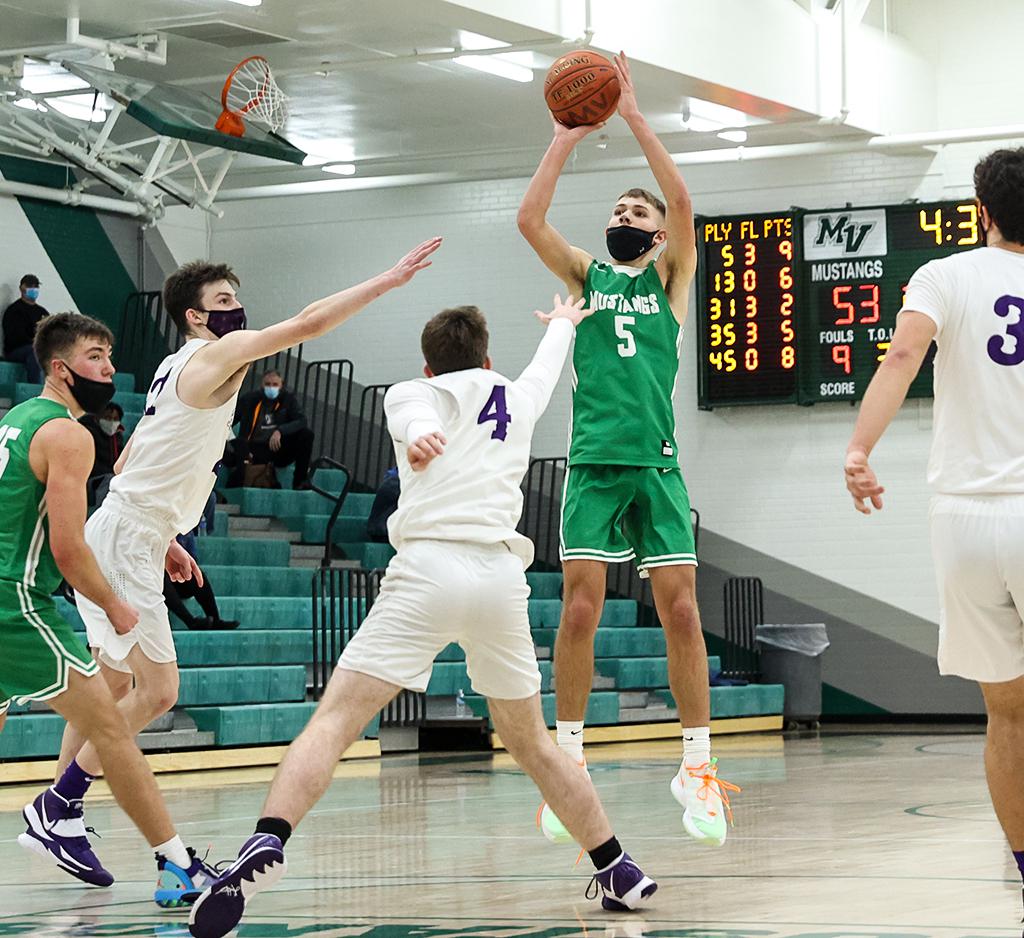 Kobe Kirk (5) shoots from the top of the key over the arms of Cretin-Derham Hall defenders. Kirk led all scorers with 20 points, including four three-pointers, in a 64-51 victory at Mounds View High School. Photo by Cheryl A. Myers, SportsEngine

Mounds View picked up a 64-51 win over Cretin-Derham Hall in a Class 4A season-opening clash between Suburban East Conference teams at Mounds View High School on Friday night.

The Mustangs (1-0) leapt ahead in the first half, leading by as many as 14 points to take a 35-22 lead into halftime. The Raiders (0-1) cut into that deficit to trail 47-43 with just under five minutes to play in the second half. The Mustangs, however, responded with back-to-back three-pointers from Dylan Wheeler and Kobe Kirk to seal the win. 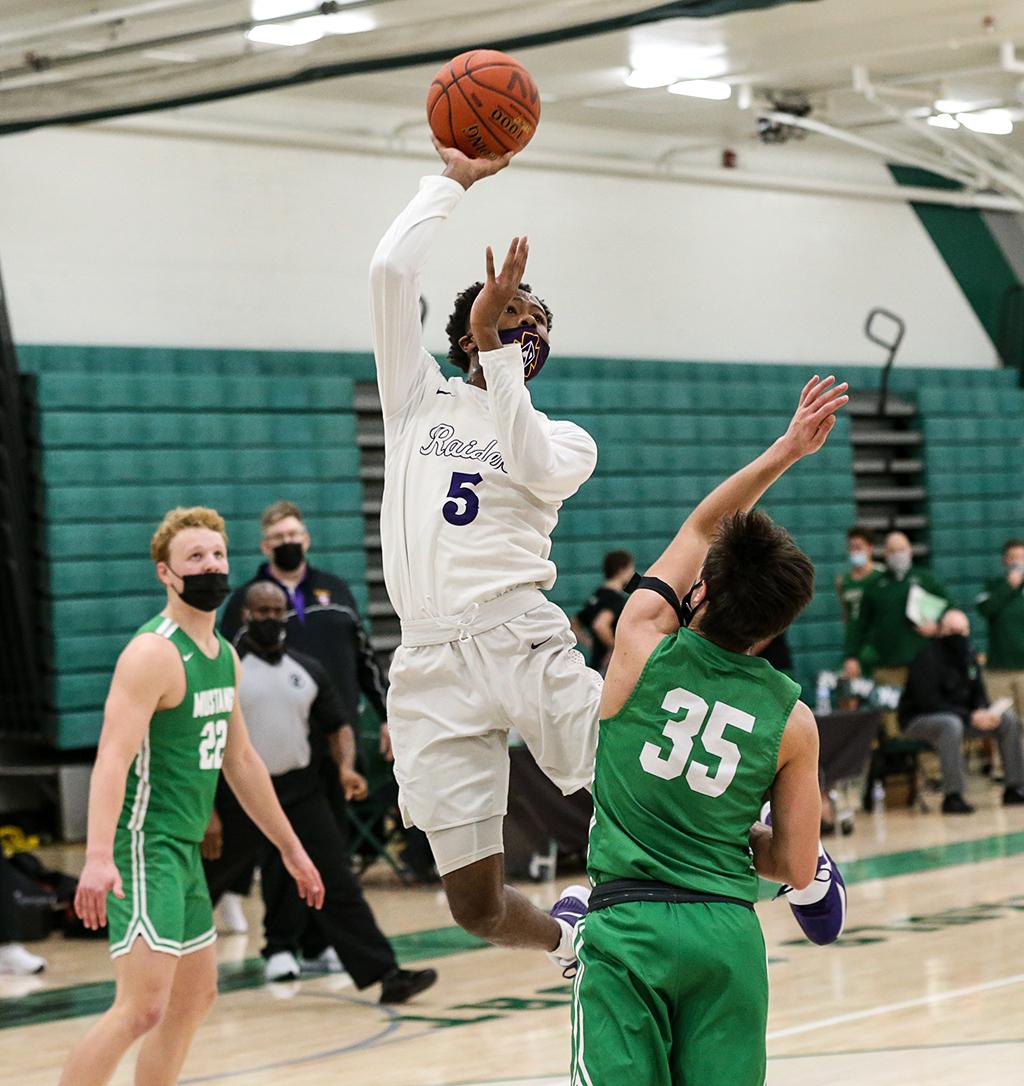 Junior Tre Holloman (5) drives the lane for a lay up late in the game. Holloman led the Raiders with 16 points and three rebounds on Friday night. Photo by Cheryl A. Myers, SportsEngine