Suggs, a senior guard from Minnehaha Academy, was one of 12 finalists picked for the honor earlier this month. 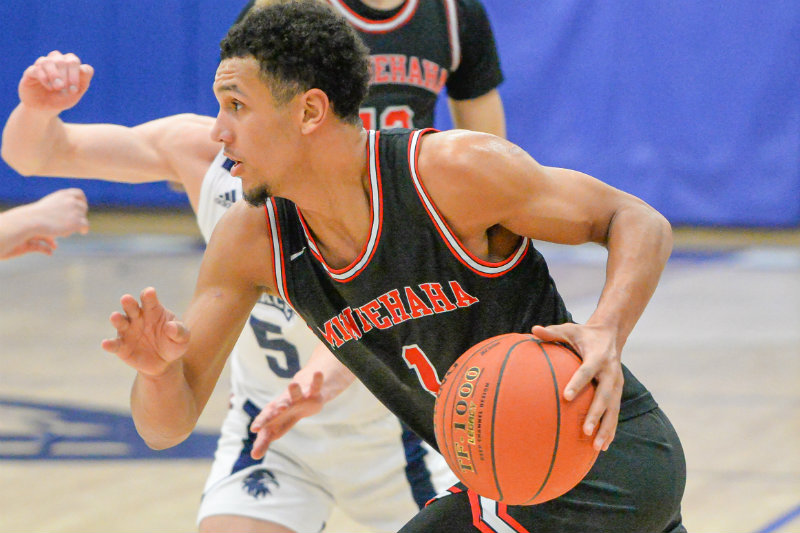 Minnehaha Academy's Jalen Suggs was announced the 2020 McDonald Award winner by the coaches' association. Suggs will continue his basketball career at Gonzaga next season. Photo by Earl J. Ebensteiner, SportsEngine

A Gonzaga commit, the 6-5 Suggs averaged 23.5 points, 7.3 rebounds, 5.1 assists and 3.8 steals per game for Minnehaha Academy, which finished the season with a 25-3 overall record and a Class 3A, Section 4 championship after defeating Totino-Grace 94-58 last Thursday. The state tournament was canceled due to concerns regarding the spread of COVID-19 the next day, denying the Redhawks the opportunity to compete for a fourth consecutive state title.

The Redhawks, who moved up to Class 3A before to the start of the 2019-20 season after winning the last three Class 2A state championships, suffered each of their defeats in the regular season to big-school opponents Cretin-Derham Hall, Hopkins and Eden Prairie. Each of those programs finished the season in the top five of the Class 4A rankings from Minnesota Basketball News, and Eden Prairie went undefeated.

Also selected the Star Tribune’s Metro Player of the Year in boys’ basketball, Suggs recorded 2,945 career points (a Minnehaha Academy record) and is the third recipient of the McDonald Award, which was first presented in 2018 to Apple Valley guard Tre Jones. Rochester John Marshall forward Matthew Hurt was chosen a year ago. Both Jones and Hurt now play for Duke, where their season just wrapped.

Jones, a sophomore, was recently chosen the Atlantic Coast Conference (ACC) Player of the Year and the conference’s Defensive Player of the Year, averaging 16.2 points per game this season. Hurt started 22 games for the Blue Devils as a freshman and averaged 9.7 points a game.

The coaches association’s prize is named after Bob McDonald, the former coach of Chisholm who won 1,012 games over a career that spanned nearly six decades. The McDonald Award is not to be confused with the Mr. Basketball award and is meant to be the top individual honor a senior player can receive. McDonald is a member of the Minnesota State High School League Hall of Fame, the National High School Hall of Fame and the Minnesota Basketball Coaches Association Hall of Fame.

When choosing the winner the coaches’ association considers several criteria, including performance throughout the entire season, strength of character both on and off the court, contributions to team effort, and the ability to excel at playing both offense and defense.