The semifinalist list has been cut from 28 names to 12. The winner will be announced after the season has concluded in late March or early April. 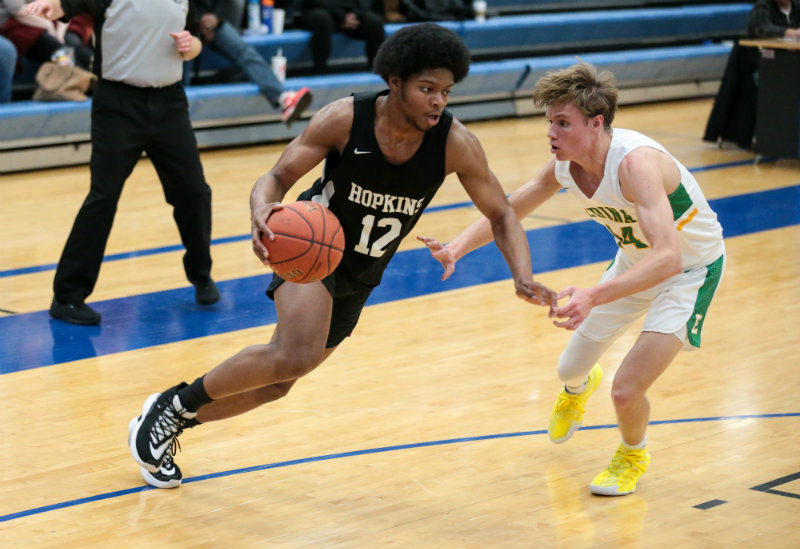 Kerwin Walton of Hopkins (No. 12) is one of 12 finalists picked for this year's McDonald Award. The winner will be selected after the season ends. Photo by Cheryl A. Myers, SportsEngine

The Minnesota Basketball Coaches Association released its list of 12 finalists for the 2020 McDonald Award on Sunday. The honor will be presented to the state’s top senior player once the season concludes.

This season the 6-foot-4 Walton has produced 26.9 points per game for Hopkins, ranked No. 5 in Class 4A by Minnesota Basketball News. In his most recent performance, Walton had 30 points, helping the Royals drop Wayzata 66-56 in a Class 4A, Section 6 semifinal. With Walton spearheading the attack, Hopkins has won 14 of its last 15 games and can lock up a spot in the state tournament if it defeats Robbinsdale Cooper in its section final tomorrow night.

East Ridge’s Carlson helped the Raptors capture this year’s Suburban East Conference crown. A 6-foot-10 forward committed to Wisconsin, Carlson produces 24.6 points and 11.7 rebounds per game this season. After knocking off Stillwater and Tartan to earn a trip to the Class 4A, Section 4 final, the Raptors can advance to state if they defeat Suburban East runner-up Cretin-Derham Hall this week. If the Raptors upset the No. 3-ranked team in Class 4A, Carlson will be a big reason why.

Abraham has been the state’s top senior scorer this season and is second overall behind Will Tschetter, a junior forward from Stewartville. Averaging 33.5 points per game, the Cambridge-Isanti guard has amassed 897 total points this season. Runner-up behind Princeton for the Mississippi 8 Conference championship, the Bluejackets are still competing in the Class 4A, Section 7 playoffs.

Eden Prairie, the top-ranked team in Class 4A, is the only undefeated big-school program still standing this season. Helping the Eagles to a 28-0 overall record, Dobbs has been the linchpin. A 6-foot-1 guard committed to Liberty University in Lynchburg, Virginia, he averages 19.2 points per game.

Named after former Chisholm coach Bob McDonald, who won 1,012 games over a coaching career that spanned nearly six decades, the McDonald Award is meant to be the top individual honor a senior player can receive. McDonald is a member of the Minnesota State High School League Hall of Fame, the National High School Hall of Fame and the Minnesota Basketball Coaches Association Hall of Fame.

The winner will be announced in late March or sometime in early April. The next honoree will be the third recipient of the award, with Rochester John Marshall’s Matthew Hurt being chosen a year ago. Tre Jones from Apple Valley received the first award in 2018. Both Hurt and Jones now play at Duke. Hurt, a 6-foot-9 freshman, averages 9.7 points per game for the Blue Devils, and Jones, a 6-foot-3 sophomore, chips in 16.2 points a game.

The table below has more information about each of the finalists.