Shakopee fends off Chaska in defensive battle to progress to Class 4A, Section 2 final

Charlie Katona led the way with 19 points to push the Sabers past the higher-seeded Hawks. 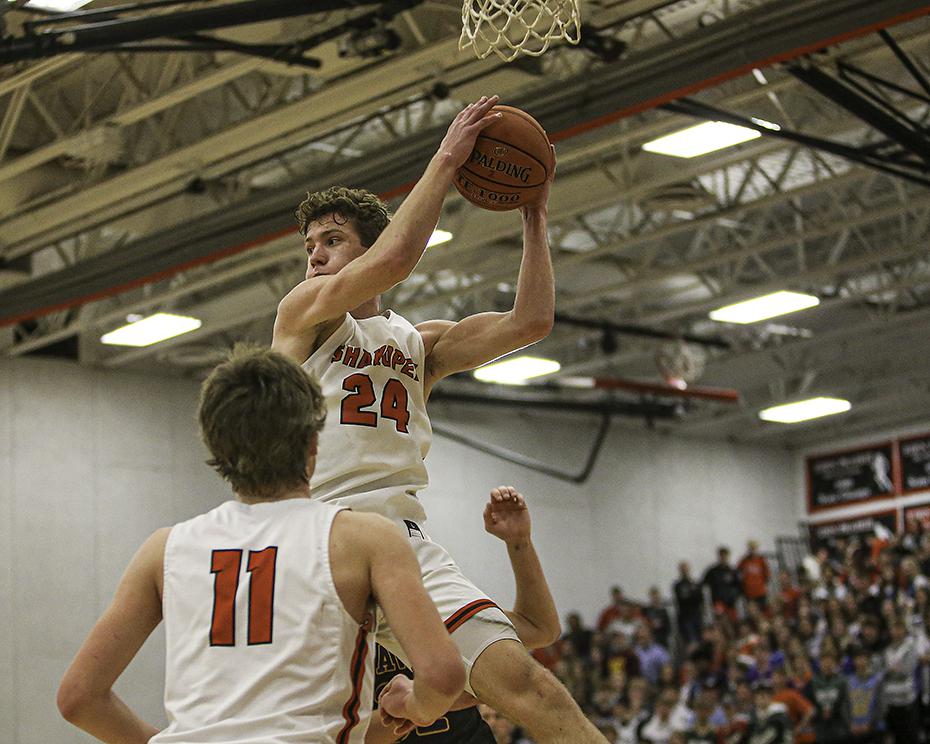 Senior Charlie Katona (24) came down with one of his 15 rebounds in the second half of Shakopee's 61-50 victory over Chaska. He also scored 19 points. Photo by Mark Hvidsten, SportsEngine

With Shakopee leading Chaska by just two points in the final minutes of Saturday’s game, Sabers’ sophomore forward Nick Katona drove to the hoop. Laying the ball off the glass and in while being fouled, he sent the Shakopee crowd into a frenzy as Shakopee’s lead grew to four.

Up to that point the Shakopee offense had struggled to find scoring production. Then, Katona’s bucket got things moving in the right direction as No. 3 seed Shakopee pulled away to defeat No. 2 seed Chaska 61-50 at Eden Prairie High School to advance to next week’s Class 4A, Section 2 final.

In the first half, the Sabers (23-5) found ways around Chaska’s staunch defense. Shakopee found success with three-point shooting, specifically with senior guard Will Cordes who knocked down three of the Sabers’ seven first-half three-pointers.

While shining from beyond the arc, Shakopee gave the Hawks offense fits throughout. Chaska, ranked No. 6 in Class 4A by Minnesota Basketball News, fell behind by as many as 14 points in the first half while no Hawks player failed registered double figures in the game’s first 18 minutes. 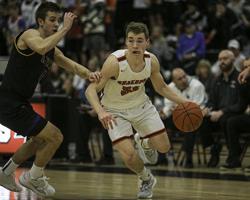 “We preach keeping teams out of the paint and off the three-point line,” Shakopee coach Jake Dammann said. “We’re not the tallest team, so we use all five guys in the paint. It’s a credit to our togetherness.”

The Sabers’ defensive effort was strong again in the second half. However, Shakopee’s offense hit the skids as the Hawks showed their own defensive prowess. More than halfway through the second half, the No. 4-4A Sabers had managed to make just four baskets and Chaska had cut the deficit to as little as two points.

“It’s a credit to Chaska,” Dammann said. “They’re one of the better defensive teams we play each year. We were searching for ways we could get open looks and finally get the ball rolling.”

“He has such a dynamic skillset,” Dammann said of Charlie Katona, a Minnesota Duluth commit. “You see how big he is but he’s also a good ball-handler. He also has that footwork and strength. He can do it on the perimeter and in the paint.”

After Nick Katona’s key bucket, the Sabers finally had some life on the offensive end and they took advantage by converting some key throw opportunities late.

“We just tried to preach to our guys poise,” Dammann said. “We had to get one stop at a time. Then, we finally got the ball rolling.”

Players such as Charlie Katona bought into his coach’s advice.

“We just had to be very patient with the ball,” Charlie Katona said. “We wanted to keep our hands in the right place. For us, our defense is what we consider our offense and what’s going to lead us to getting points.”

Now, the Sabers’ defense will be tested by top-seeded Eden Prairie, which is undefeated and the top-ranked team in Class 4A. It will be the first section final for Charlie Katona and the other Shakopee seniors.

“It’s just amazing that we get this chance,” Charlie Katona said. “We just have to keep working and do what we do to lead us in the right direction.” 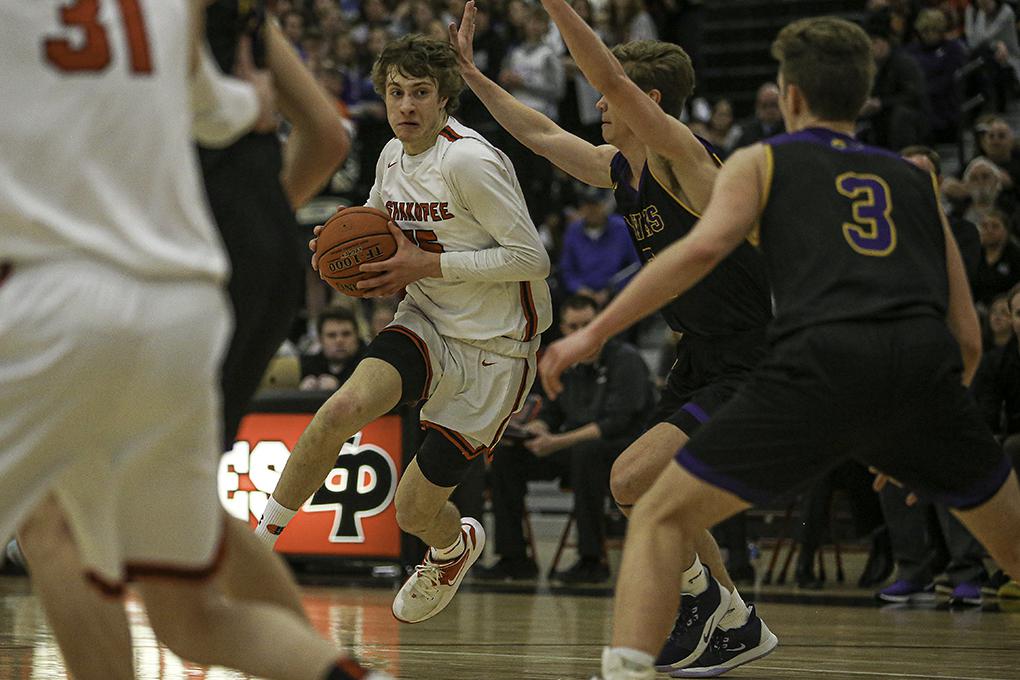 Shakopee sophomore Nick Katona looked for an opening in the Chaska defense. His basket in the second half broke a scoring drought and ignited a 9-1 Shakopee run to break a close game open. Photo by Mark Hvidsten, SportsEngine

After Saturday’s first Class 4A, Section 2 semifinal produced a combined 173 points, the second part of the afternoon’s doubleheader at Eden Prairie High School was a more defensive affair.

No. 3 seed Shakopee proved to be the better defensive unit of the two as the Sabers, ranked No. 4 in Class 4A by Minnesota Basketball News, hunkered down and won their fight against No. 2 seed Chaska 61-50 to advance to next Friday’s section championship against top-seeded Eden Prairie.

In the opening half, Shakopee (23-5) built a lead as large as 14 points behind some hot shooting from beyond the three-point arc. Four different Sabers, including Charlie Katona, knocked down three-pointers in the game’s first 17 minutes.

Katona was one of three Sabers in double figures. Senior guard Will Cordes finished with 16 points while sophomore forward Nick Katona added 12 points.

The No. 6-4A Hawks (24-4) cut the deficit to as little as two in the second half but couldn’t quite even the score. Junior guard Luke Strazzanti led Chaska with 24 points while senior guard Zach Lea finished with 14 points. 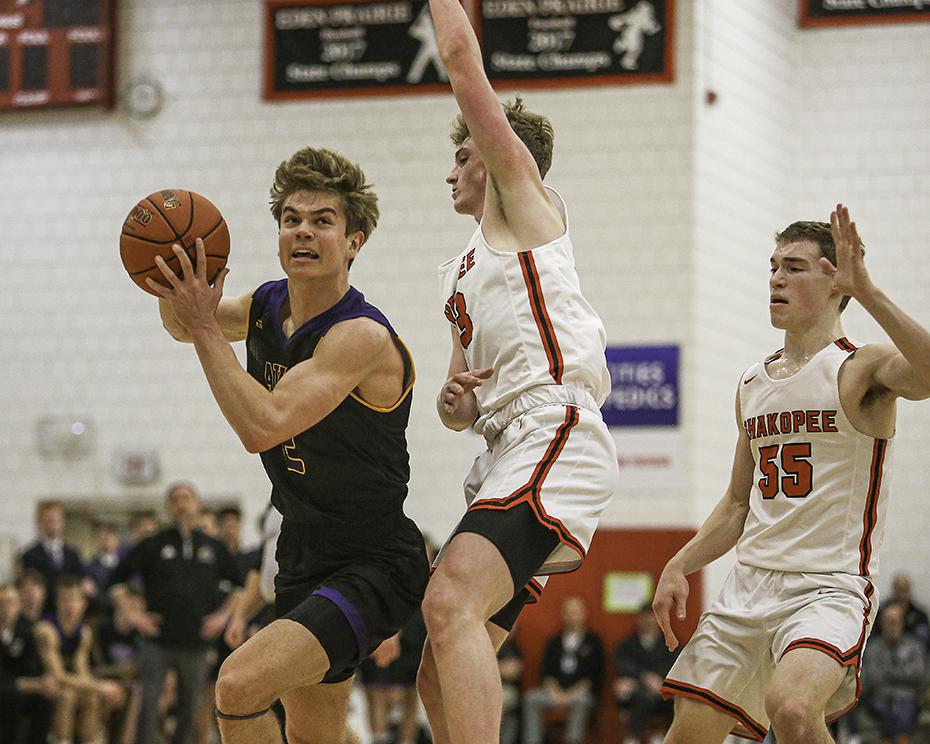