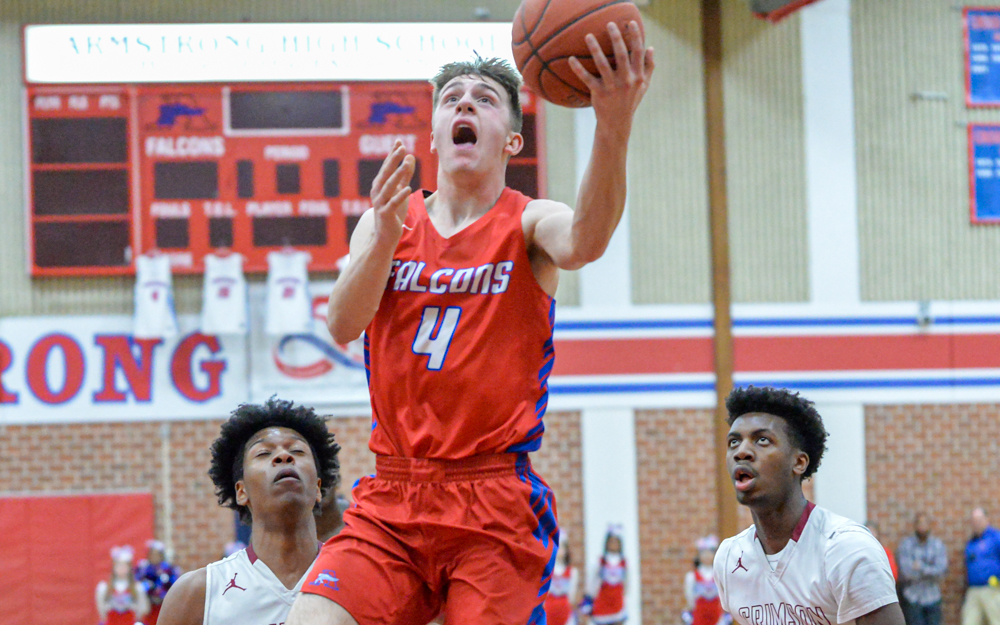 Robbinsdale Armstrong's Jake Breitbach (No. 4) had a team-high 23 points in the Falcons' 74-66 defeat of Maple Grove at home on Friday night. Photo by Earl J. Ebensteiner, SportsEngine

Sports are supposed to be fun, especially at the high school level.

But basketball hasn’t been as fun for Robbinsdale Armstrong lately, with the Falcons going through a grueling stretch of playing nine games in 18 days and they had lost two of their last three contests by a combined nine points.

Things got a little better on Friday. Armstrong rebounded from its three-point loss to St. Louis Park on Wednesday to come away with a 74-66 triumph at home over Northwest Suburban Conference foe Maple Grove, ranked No. 5 in Class 4A by Minnesota Basketball News, to finish the regular season.

The uproar in the Falcons’ locker room after the game was audible from several feet outside the metal doors, making it clear the win meant a lot. 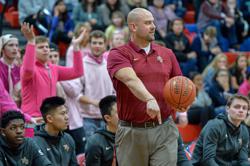 The excitement from the locker room paralleled the atmosphere in the gym the entire night, as both student sections made plenty of noise throughout the game. The pinnacle of the chaos came at the end of the first half, when the Armstrong section erupted after senior Adam Biewen drained a 25-foot jumper right before the halftime buzzer sounded. The basket cut the Armstrong deficit to one point, and the Falcons (19-7, 7-5) carried that momentum into the second half.

“Anytime you make a shot at the end of a half it’s big. Just going into halftime down one is a big deal and it kind of carried over into the second half,” Bryant said.

The Falcons took over from there, as they gained the lead early in the second half and didn’t let go.

They were led offensively by senior Jake Breitbach, who scored 23 points — just two shy of his season high. Fellow senior Hezekiah Iyawe added 16 points and nine rebounds, while Biewen was right behind him with 15 points, including some clutch free throws in the final minute to help close the game.

“They’ve been carrying us all year, and they need to carry us, so it was pretty fitting for them to be the guys tonight. And again, what a fun atmosphere on senior night; you couldn’t beat it,” Bryant said.

The Crimson (21-5, 12-0) were led by the backcourt duo of Lovell Williams and RaShaun Parker. They were borderline unstoppable in the first half, with Parker scoring 12 points and Williams dropping 11 heading into the break. But fatigue and a shift in Armstrong’s defensive effort helped hold Parker to just one point in the second half, while Williams was kept to three points until the final two minutes when the Crimson were chasing.

“Neither of them came out in the second half, that’s probably part of it; that’s my fault,” said Maple Grove coach Nick Schroeder. “I think Armstrong did a nice job of making some changes and extending out.”

Both teams will now head into their respective section tournaments next week, and both coaches want to use Friday’s result to help lead to success in the postseason.

“I hate to say it’s a good loss, but if we can learn from it and refocus, I think our guys will be a little more dialed in come playoff time,” Schroeder said.

“We’ve just got to carry this attitude — not worry about the end result, have fun with the process,” Bryant said. “Play the same way and we’ll be fine.” 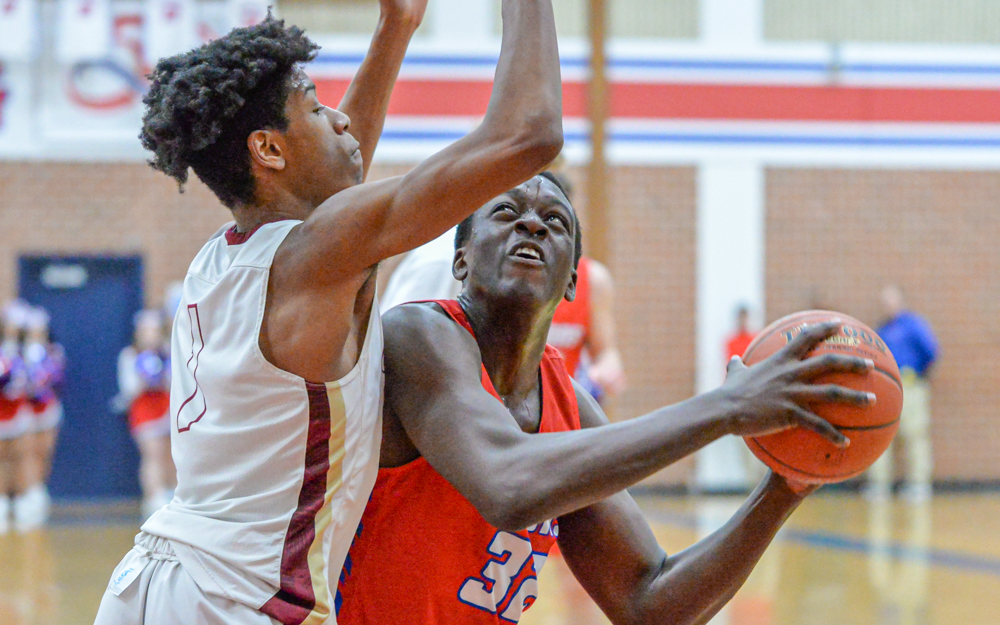 Robbinsdale Armstrong ended its regular season on a high note, coming away with a 74-66 win at home over Northwest Suburban Conference opponent Maple Grove on Friday night.

The game was closely contested in the first half, as the Crimson (21-5, 12-0) went into the halftime break with a 35-34 lead. Maple Grove’s Lovell Williams and RaShaun Parker proved to be the difference early, combining for 23 points in the first half.

The Falcons (19-7, 7-5) took control in the second half, however, as they suffocated the Crimson backcourt and forced them into tougher shots. Williams and Parker scored a combined 14 points in the second half, and 10 of them came from Williams in the final minutes while the Crimson, ranked No. 5 in Class 4A by Minnesota Basketball News, were chasing. Williams finished with 23 points, while Parker had 16.

It was senior night for the Falcons, so it was fitting that they were led by their four senior captains: Jake Breitbach, Hezekiah Iyawe, Adam Biewen and Benhur Soloman. Breitbach had a team-high 23 points, while Iyawe scored 16 and Biewen contributed 15. D’Sean Larkins scored 10 points and Soloman chipped in with six. 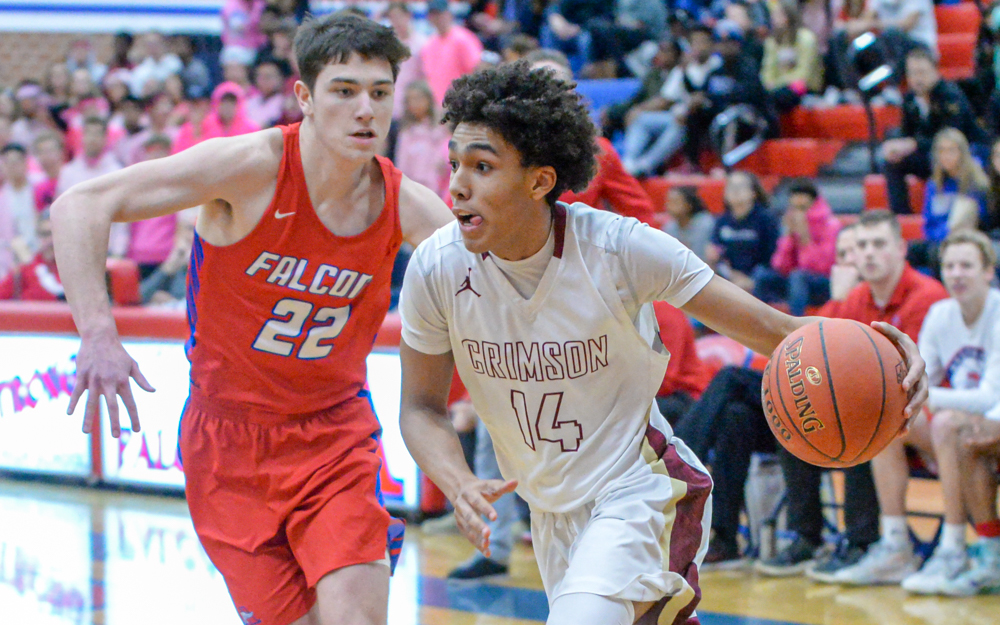