The Wildcats relied on stout defense and clutch free throws to down the rival Tigers. 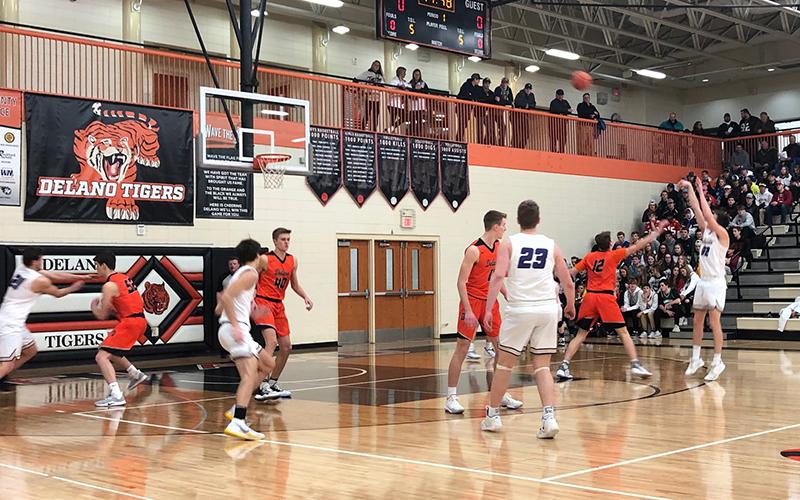 In the past two seasons, the four Wright County Conference matchups between Waconia and Delano have been decided by 11 points combined, so it was no surprise that another tight one took place on Thursday night at Delano High School.

With a clutch performance, making 11 free throws in the final two minutes of the game, Waconia took sole possession of first place in the East Division of the conference standings by defeating Delano 65-59.

Wildcats senior guard P.J. Hayes led Waconia, ranked No. 6 in the Class 3A rankings by Minnesota Basketball News, with 24 points.

“He can drive to the basket and is a phenomenal shooter from anywhere in the gym,” said Delano coach Terry Techam. “And you can’t foul him because he’ll make those free throws. You just try to limit him anyway you can.”

P.J., who recently became Waconia’s all-time scoring leader with 1,723 points, was also named to the Mr. Basketball watch list. He is planning to play college basketball, but has not yet decided on a school according to his dad, Waconia coach Pat Hayes.

Although the game was close throughout, Waconia (16-4, 6-0) never trailed and showcased an impressive ability to defend.

“I thought we did a good job of not giving them easy shots and made them work really hard tonight,” Hayes said. “I always tell the boys you have to move to defend and all of that movement wears out your opponent.”

“We were worried about them shooting threes so we really practiced keeping them to shooting twos,” said P.J.

When asked about his team’s ability to make free throws late in the game, he said that is something they have focused on improving.

“We were iffy on free throws early in the season but we knew if we missed them the coach would make us run so we started taking them seriously,”  he said.

Hayes added: “I’ve been the coach at Waconia for 18 years and P.J. is 18 so he has lived every practice with me. I coached the player he overtook as the scoring leader so that was a little bittersweet for me.”

P.J. said there are pros and cons to having his dad as a coach.

“I always hear the ‘daddy’s boy’ chants and all of that stuff,” he said. “But the good part about it is the gym is always open.”

As evidenced by the recent margins of victory in these conference matchups, both teams are very evenly matched.

“We know each other so there really aren’t any tricks,” coach Techam said.

“These are always big games that bring out the best in the kids,” coach Hayes said.

Their conference game in January was postponed due to inclement weather so this was late in the season for their first matchup. The good news about that? Both teams only have to wait two weeks for the rematch.

Showcasing an impressive ability to defend along with some clutch free throws, Waconia took sole possession of first place in the Wright County Conference East Division against conference rival Delano at Delano High School on Thursday night by a final score of 65-59.

Although the game was close throughout, Waconia (16-4, 6-0) never trailed, and made 11 free throws in the last two minutes of the game to earn the road victory.

The first game of this conference matchup was delayed by a snowstorm in January. The rematch is slated for Feb. 27 at Waconia.