Twenty-eight semifinalists were unveiled by the state coaches' association earlier this week. The finalists will be announced in early March. 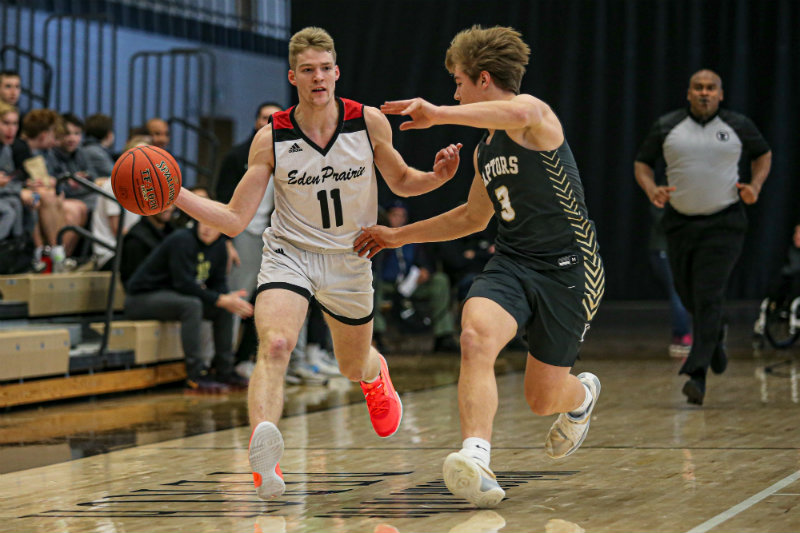 Drake Dobbs (left) is one of two Eden Prairie players chosen to be a semifinalist for the 2020 McDonald Award, which is presented by the coaches' association to the state's top senior player. Photo by Mark Hvidsten, SportsEngine

The semifinalist list for the 2020 McDonald Award was released earlier this week by the Minnesota Basketball Coaches Association. Twenty-eight players were selected for the honor, which is bestowed upon the state’s top senior player at the end of each season.

Two teams had more than one semifinalist selected, with Eden Prairie and Rochester Mayo each boasting two honorees.

Eden Prairie, the top-ranked team in Class 4A by Minnesota Basketball News from Feb. 5, features Drake Dobbs and Connor Christensen, who were both chosen McDonald Award semifinalists. Dobbs and Christensen have helped the Eagles to a perfect 22-0 record to date this season, with Dobbs averaging 19.1 points per game and Christensen chipping in with 12.7. Christensen, a 6-foot-7 forward, is committed to Dartmouth, while Dobbs, who plays guard, plans to continue his basketball career at Liberty in Lynchburg, Virginia.

Gabe and Mason Madsen are twin brothers picked from Rochester Mayo. Both are committed to Cincinnati, where they’ll play for the Bearcats. The Madsens have helped the Spartans to six consecutive victories and a 16-5 overall record this season. Gabe Madsen averages 27.9 points per game while Mason Madsen is producing at a clip of 18.1 points a game.

Minnehaha Academy’s Jalen Suggs, a Gonzaga commit, has produced his entire career for the No. 1-3A Redhawks. Suggs, a dynamic performer who averages 22.6 points a game, has Minnehaha Academy looking to capture its first Class 3A state title before he graduates. The Redhawks moved up to Class 3A prior to this season after winning the last three Class 2A state titles.

Patterned after the Wooden Award, which is given to the nation’s top Division I player in men’s and women’s basketball each season, the state coaches’ association takes into account a list of criteria when choosing who to honor. The criteria includes overall performance throughout the season, whether or not a player excels at playing both offense and defense, their strength of character, both on and off the court, and how they contribute to team effort.

A group of finalists will be unveiled for the McDonald Award in early March, and the winner is expected to be chosen late that month or in early April.

Now in its third year, the McDonald Award was presented to Rochester John Marshall’s Matthew Hurt a year ago. In 2018, Apple Valley’s Tre Jones received the first award. Hurt and Jones are both playing collegiately for Duke. Hurt, a 6-foot-9 forward, produces 10.5 points per game for the Blue Devils, while Jones, a 6-foot-3 guard, averages 15.6 points.

View the table below to see more information about each of the semifinalists, who are presented in alphabetical order by school.