Trailing 32-19 at halftime, Raptors sophomore Kendall Blue scored 21 of his game-high 25 points in the second half. 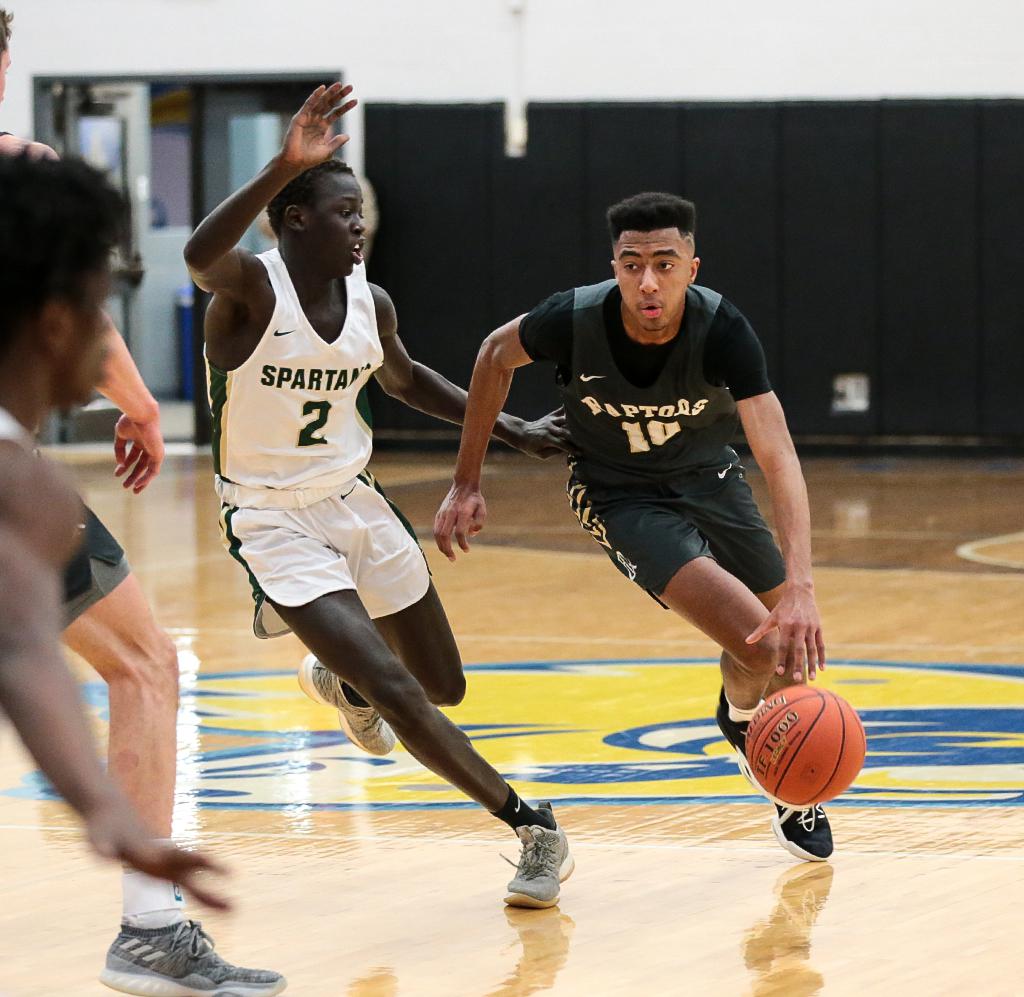 East Ridge battled back from a 13 point deficit at halftime to beat Rochester Mayo 64-63 in the Jack Link's Hall of Fame matchup. Kendall Blue (10) scored a game-high 25 points for the Raptors. Photo by Cheryl A. Myers, SportsEngine

East Ridge found itself in a 13-point halftime hole in its contest against Rochester Mayo in the third game of the inaugural Jack Link's Minnesota High School Basketball Hall of Fame Winter Classic Saturday.

So in the second half the Raptors decided to lean on their one-two punch of senior Ben Carlson and sophomore Kendall Blue.

Good decision: The pair combined for 32 points in the second half and fueled a 64-63 win over the Spartans in a contest hosted by Anoka-Ramsey Community College.

"They really lead us offensively, and they locked in defensively in the second half," said East Ridge coach Josh Peltier of Carlson and Blue. "They are both tremendous players, and we are just lucky to have those guys leading us."

Blue led all scorers with 25 points for East Ridge, ranked No. 10 in Class 4A by Minnesota Basketball News. Meanwhile Carlson, a Wisconsin commit, posted a double-double with 16 points and a game-high 14 rebounds. 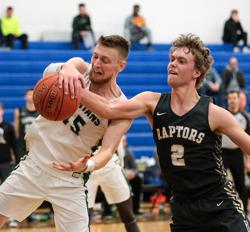 "We talked about guarding better, and if we fixed our defense it would lead to better offense," Peltier said. "We knew we would shoot better than we did in the first half, and if we continued to get the looks we were getting, the shots would fall. And the kids believed that."

The Raptors responded by scoring nine straight points in the first two minutes of the second half to cut the deficit to 37-28, then kept chipping away. Trailing 54-43 with 7:30 still to play, the Raptors used a 13-2 run over the next two minutes — a run punctuated by a 3-pointer by Blue — to tie the game at 56-56.

"I think we're more of a second-half team," Blue said. "We communicated better on defense, and I thought the bench brought great energy. All of those things helped a lot."

That crucial run began when East Ridge (12-5. 8-1) ran the same play on back-to-back possessions, with Blue working off a Carlson screen at the foul line, then curling for an open midrange jumper.

"We do that all the time in practice, with Kendall coming off my screens," Carlson said. "When it comes to crunch time, we want to have the ball because we think it gives us the best chance to win."

Blue scored 21 points in the second half, including 13 in the final seven minutes.

Carlson gave the Raptors a 60-58 lead when he inbounded the ball off a Spartan and dunked with 3:30 on the clock, and from there East Ridge hung on. But it was a roller-coaster ride until the very finish as Sharp made a 3 with 3.8 seconds left that made it a one-point game, and the Spartans then forced a turnover on the following inbounds to get the ball back with 0.6 seconds left.

Madsen's desperation 3-point shot at the buzzer fell off the rim to give East Ridge the narrow victory.

"I was just really proud to get that win," Peltier said. "We talked about battling for 36 minutes, and we had to play every second of that. We had to keep grinding, but I'm so proud of this group for keeping its focus and coming together for the win." 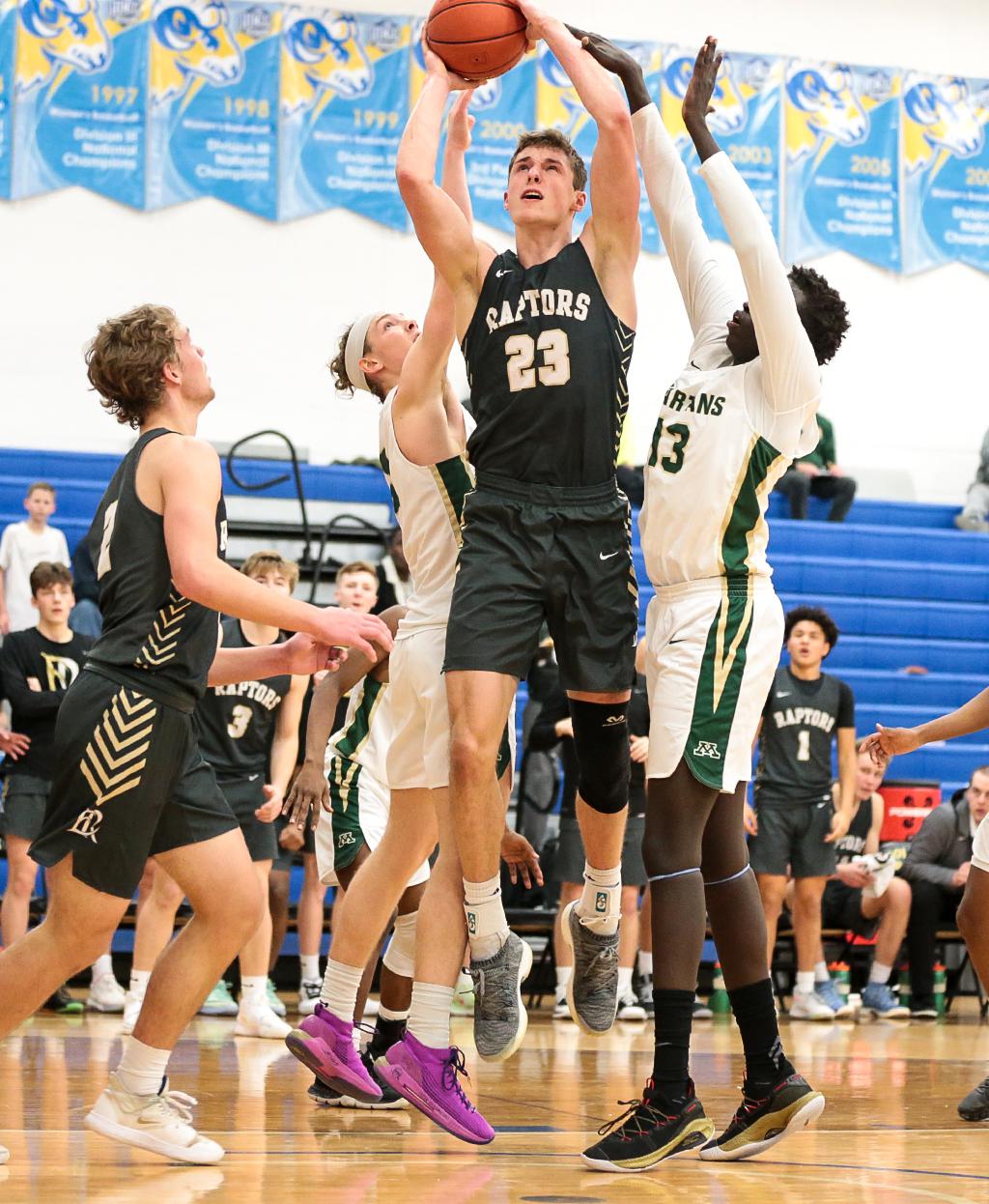 East Ridge senior Ben Carlson (23) breaks through defenders Gabe Madsen and Riek Riek (13) for two of his 16 points in the game. The Raptors rallied for a 64-63 win on Saturday night. Photo by Cheryl A. Myers, SportsEngine

The Raptors, ranked No. 10 in Class 4A by Minnesota Basketball News, used the one-two punch of senior Ben Carlson and sophomore Kendall Blue to claim the comeback victory. Trailing 32-19 at halftime, Blue scored 21 of his game-high 25 points in the second half, while Carlson added 11 points in that period.

Carlson, a Wisconsin commit, posted a double-double with 16 points and 14 rebounds.

The Spartans made six 3-pointers in the first half, with Madsen and Andre Crockett making two each.

But East Ridge (12-5, 8-1) got back into the game with a 9-0 run early in the second half, then rode Blue and Carlson the rest of the way to complete the comeback. 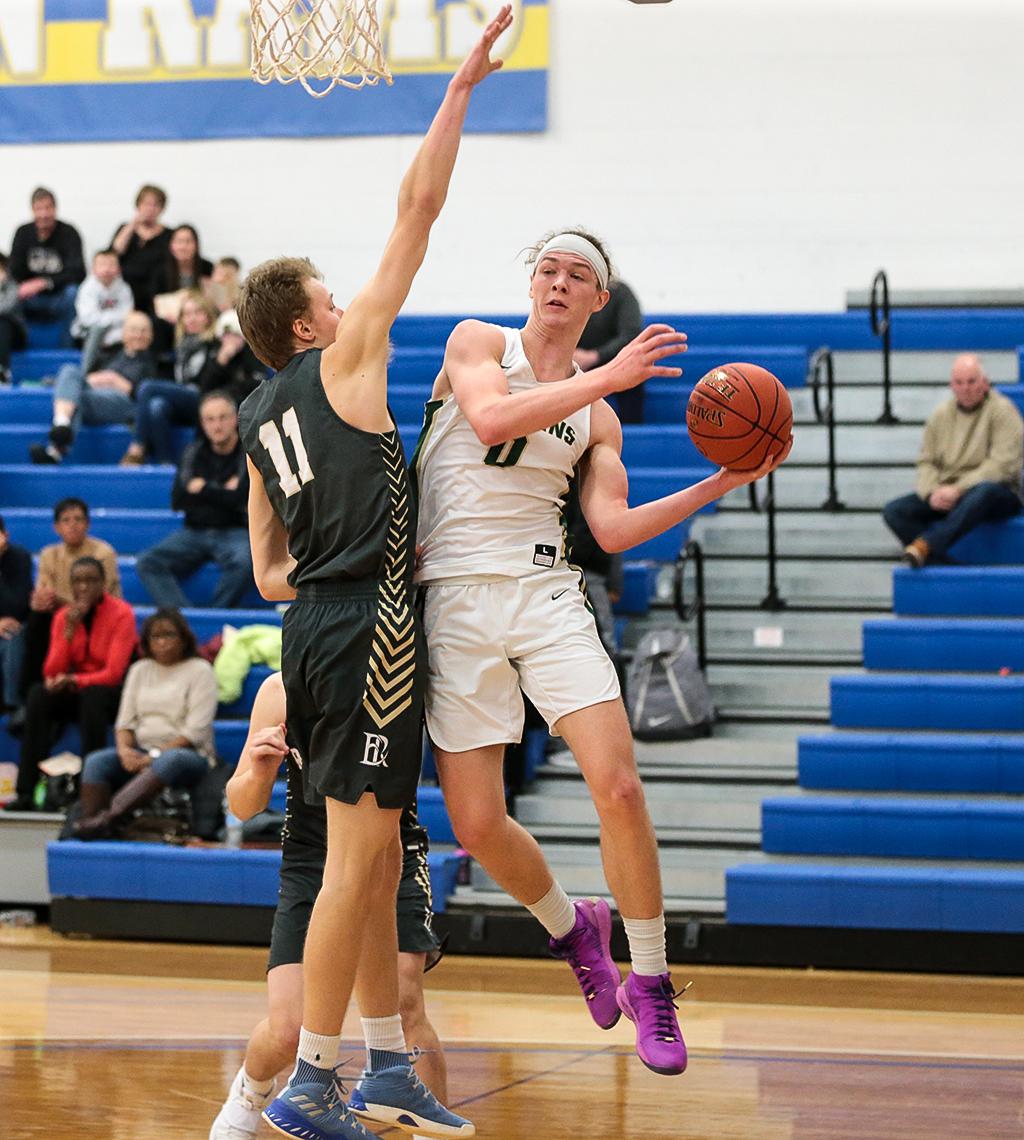 Rochester Mayo's Gabe Madsen (0) makes a pass under the basket in the first half. Madsen scored 16 points for the Raiders at the Jack Link's Hall of Fame match up at Anoka-Ramsey Community College. Photo by Cheryl A. Myers, SportsEngine