Is star-studded Minnehaha Academy the state's best team ever?

Minnehaha Academy and Hopkins players committed to or drawing interest from Division I schools came together for a photo at Minnehaha’s new gym. Photo: Jeff Wheeler * jeff.wheeler@startribune.com

Jalen Suggs is certain of it. So is Kaden Johnson. Add Terry Lockett Jr., back in the fold after a year at a prep school in Ohio, to the list.

Prince Aligbe believes it to be true as well, although he knows no one is simply going to hand them the label. Even athletic/activities director Josh Thurow is on board. But as a former coach, he knows the potential pitfalls ahead.

The only member of the Minnehaha Academy boys’ basketball program unwilling to publicly state what many basketball observers are thinking is coach Lance Johnson and that’s completely understandable. Coaches tend to avoid using superlatives about their teams like the rest of us avoid icy sidewalks, particularly when it has yet to play a game.

But let’s say it now: The 2019-20 Minnehaha Academy Redhawks are likely the best high school team put together in Minnesota history.

“Without a doubt,” Suggs said. “With all of the pieces we’ve got and the growth we can do, I don’t see how we cannot be.”

Those pieces start with Suggs,a five-star recruit who’s ranked No. 6 nationally by ESPN, No. 10 by 247Sports and No. 11 by Rivals in the class of 2020. He’s a 6-5 physical freak — smooth and creative off the bounce, explosive to the rim and stucco-sturdy — who is also a gifted leader.

Attention-getting locally as a top recruit in both basketball and football, Suggs has already paced the Redhawks to three consecutive Class 2A state titles.

Just as important to the Redhawks’ success will be the play of 7-foot junior power forward Chet Holmgren, whose star has been rising steadily. The stilt-limbed Holmgren is the state’s best rim protector, earning him the nickname “The Slim Reaper.” But he’s also agile enough to bring the ball up court, presents impossible matchups in the paint and is skilled enough to routinely make three-pointers.

According to Rivals, Holmgren is the nation’s No. 4 prospect in the class of 2021.

“He posts, he can play guard, we allow him to dribble the ball up the court,” coach Johnson said. “And then on defense, we can gamble and we have him just sitting in the back. He’s a luxury.”

The tour of top recruits doesn’t stop there. Sophomore Prince Aligbe, a 6-6 forward already in his fourth varsity season, provides physicality and athleticism. With the body of an NFL defensive end, Aligbe is a rugged rebounder and ferocious dunker who is surprisingly nimble around the basket. Currently ranked No. 40 in the Class of 2022 by Rivals, Aligbe is well into double-digits in Division I college offers.

“I’ve got 19 right now,” he said. “Of course, the hometown, Minnesota. And the likes of Tennessee, Iowa, Iowa State, California. Illinois, Georgia. Florida. Like that.”

That’s three top 40 recruits on one team. Two more players, Johnson and Lockett, are also highly sought-after athletes, although their sport of choice is football, where both are D-I recruits. Both are talented enough to play basketball at the next level.

Not enough? There’s sharpshooting sophomore guard Donovan Smith, the team’s best three-point shooter. Senior Sam Gonzale, a surefire starter at nearly any other program in the state, provides solid point guard relief off the bench. And the Redhawks have added talented transfers in 6-3 junior Isaiah Davis, who led Apple Valley in scoring last year, and 6-5 sophomore Chase Carter, the son of assistant coach (and former Gopher) Randy Carter, who moved from Maranatha.

Add it all up and it’s a collection of talent that rivals any in state history.

Said Kaden Johnson: “We have all types of all-stars. I’d say we’ve probably got one of the best teams in Minnesota history.”

Their reputation is reaching national levels. On Jan. 4, Minnehaha Academy will host Sierra Canyon (Cal.) in a game televised on ESPN. Sierra Canyon features Kentucky-bound B.J. Boston as well as Zaire Wade and Bronny James, the sons of Dwyane Wade and LeBron James.

While others are touting potential, however, coach Johnson understands that reputation doesn’t win games. He’s not about to saddle his team, which has moved up to Class 3A this season, with the weight of a “best ever” when it has yet to play a game.

“I would never make that evaluation. I think it’s a little premature,” he said. “There’s a ton of stuff that goes into being a great team and ability is just a piece of it. We have to have great chemistry, we have to play great defense, we have to play as a team and make sure we don’t underestimate any of our opponents.”

The chemistry angle seems set. Most of the players began playing together before high school. And the return of Lockett has been smooth. “Like I never left,” he said.

“We hold each other accountable,” Suggs said. “We know the hard work we had to put in to get here. We just have to do the little things and not get too over our heads.”

Anyone close to the team sees the potential, however, and it’s got them giddy.

“It’s exciting to think about all of the possibilities,” Thurow said. “For over 100 years, Minnehaha Academy has been known for quality Christian education. Just in the last 10 years, our athletics have caught up to that. It’s a very exciting time. Hopefully, we’re doing it the right way. The kids are doing a great job in the classroom, too. And they’re good people.”

Blast from the past: Four other great boys’ teams

Edina, 1967: With a cast featuring Bob Zender, Jeff Wright, Jay Kiedrowski and Kurt Schellhaus, the 1967 Hornets won their second of three straight state titles with arguably it’s best lineup during that stretch. Finished 27-0, extending an unbeaten streak to 54 games that reached 69 the next year, still the longest in state history.

Minneapolis North, 1995: The first of three consecutive state championship teams was the only one to go undefeated (30-0). Khalid El-Amin and Jabbar Washington led the Polars to a 54-52 victory over Staples-Motley in the first Sweet 16 state championship game. They won despite missing starters Ozzie Lockhart and Chris Rainey because of academic issues.

Hopkins, 2009: The 2009 Class 4A state champs may have been the Royals’ best. It started with Royce White, still considered one of the most talented players Minnesota has produced. The Royals, 31-0 that year, also had C Mike Broghammer (Notre Dame), Raymond Cowels (Santa Clara) and Trent Lockett (Arizona St.). Fifth starter Marcus Williams played football at North Dakota St. and in the NFL.

DeLaSalle, 2014: The 2014 Islanders won the third of their six straight Class 3A state titles. Though it didn’t finish undefeated (26-3), the team’s talent was remarkable: Reid Travis, who went on to Stanford and Kentucky; Jarvis Johnson, who committed to Minnesota before a heart ailment sidelined his career; Sacar Anim (Marquette),and Geno Crandall (North Dakota and Gonzaga). Current Gopher Gabe Kalscheur was a sophomore on that team and Goanar Mar (George Mason) a junior. 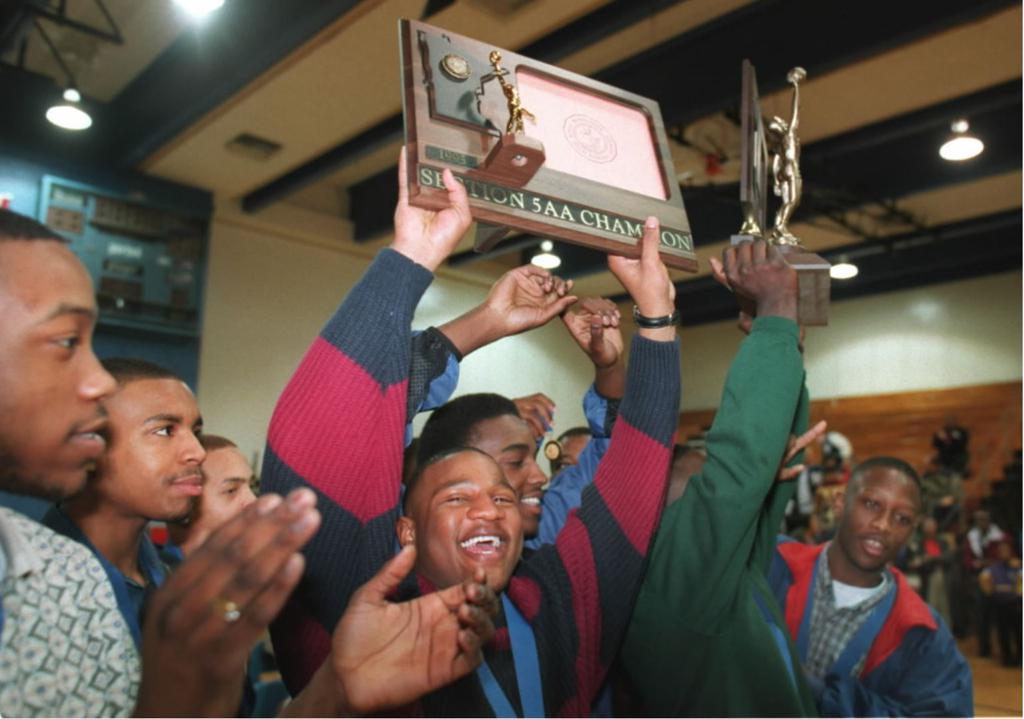