Cade Goggleye's basket with 1.5 seconds left gave the Grizzlies a 57-55 victory and their third consecutive Class 1A championship game appearance. 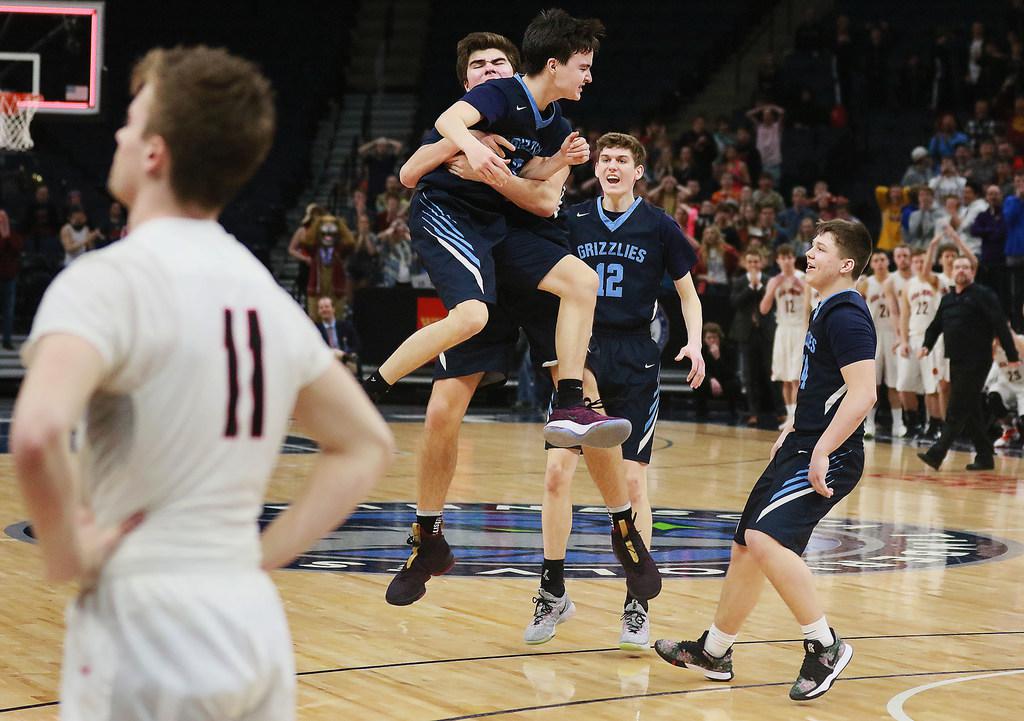 North Woods' Cade Goggleye (3) jumps into the arms of teammate Trevor Morrison after hitting a last-second three-point shot to lift the Grizzlies to victory over Ada-Borup on Friday at Target Center. Photo: DAVID JOLES •david.joles@startribune.com

North Woods senior guard Cade Goggleye is accustomed to dazzling the crowd. He added himself to the mix Friday.

Goggleye made a fadeaway three-pointer from behind the side of the backboard in the corner with 1.5 seconds left, giving No. 6-ranked North Woods a 57-55 victory over No. 8 Ada-Borup in the Class 1A semifinals at Target Center.

The Grizzlies (29-2) will play Saturday for the state title for the third consecutive year, after finishing as the runner-up the previous two times.

“That was crazy,” said Goggleye, who had 18 points, six assists and three steals. “I wowed myself.”

Goggleye was blanketed by Cougars senior guard Jared Brainard on the last-second shot. Brainard had 15 points and six assists.

“We had him pinned in the corner, and I had my hands up,” said Brainard, who had 15 points and six assists. “He rose up and hit a tough shot. Cade is a great player.” 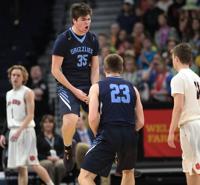 Two years ago, Goggleye hit a half-court shot at the buzzer to give the Grizzlies a 54-51 victory over Central Minnesota Christian in the quarterfinals of the state tournament at Williams Arena.

“Cade’s done this before for us,” North Woods coach Will Kleppe said. “He put up another shot we’re all going to remember.”

The Cougars (29-2) took a 55-54 lead on Brainard’s three-point play with 32 seconds left. It came after a steal and outlet pass by junior guard Verdis Barber off a Goggleye turnover.

“I knew I had to make up for that play,” Goggleye said. “I made up for it at the end of the game.”

Brainard had a chance to increase the Cougars’ lead but missed the front end of a 1-and-1 with 16.9 seconds left.

“You have to work hard and get position,” Morrison said. “I always attack the basket.”

“That was an amazing, incredible shot,” Miller said of Goggleye's three-pointer. “Sometimes it comes down to dumb luck.”