Four first-half runs helped the Hornets build a 21-point lead at halftime en route to a 67-34 victory in the Class 1A semifinals. 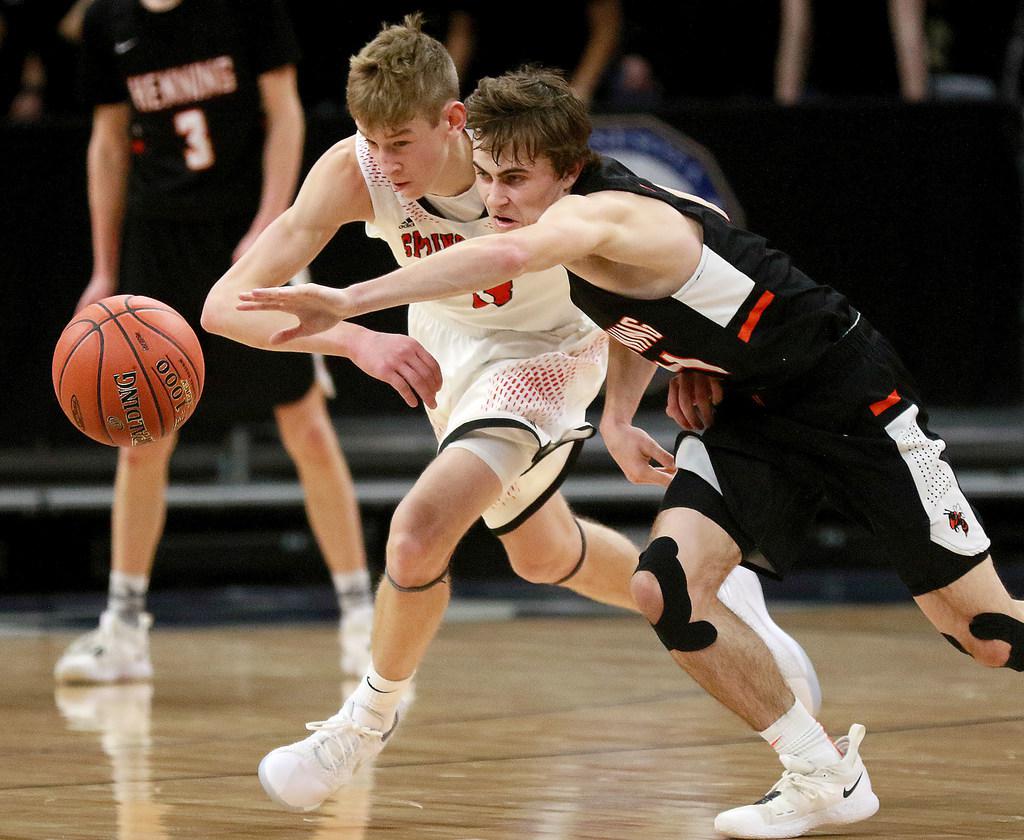 Spring Grove's Caden Grinde (left) and Henning's Sam Fisher battle for a loose ball in the first half of the Class 1A semifinals Friday at Target Center. Photo: DAVID JOLES •david.joles@startribune.com

The bigger the court, the faster Henning plays.

The No. 7-ranked Hornets stung Spring Grove with 14-0 run to end the first half and ran away with a 67-34 victory in the Class 1A semifinals Friday at Target Center.

Henning, making its first state tournament appearance since back-to-back trips in 1965 and 1966, will play Saturday in the championship game for the first time in program history.

“Our quickness is our asset,” Henning coach Randy Misegades said. “We have to get out in transition with our lack of size. We were able to execute that today.”

Henning also had runs of six, seven and eight points in the first half while building a 37-16 lead at the intermission. The Hornets (30-1) were 13-for-22 from the floor, including 5-for-7 from three-point range, and made all six of their free throws in the opening half.

The Lions (24-5) struggled from the floor (7-for-23) and committed eight turnovers in the first half. The combination allowed Henning to get out in transition, where it’s at its best.

“Our defense created our offense,” said Henning senior guard Sam Fisher, who had 15 points and eight assists. “It opened everything up for us. We are all quick and fast.”

After a Spring Grove three-pointer to open the second half, the Hornets went on a 9-0 run in a 1 minute, 41-second span to widen the cushion to 47-19. Henning shot 57 percent from the floor.

“We had great balance today,” Misegades said. “These guys don’t care who scores it.”

For Spring Grove, sophomore guard Caden Grinde had a team-high 11 points. The Lions shot 26 percent from the floor.

“We’ve never seen that kind of speed,” Spring Grove coach Wade Grinde said. “It was a whirlwind we got caught up in.”

The 33-point victory coincides with jersey No. 33 worn by Jacob Quam that occupies a seat on the Henning bench during games. Quam, killed in a car accident in April 2017, was a teammate of some current players and would have been a senior starter/captain on this year’s squad.

Asked about the coincidence at the post-game news conference, Sam Fisher replied that Quam “is always with us.”