Wednesday tourney notebook: Minnehaha Academy seeks OK to move up to Class 3A

Plus DeLaSalle is staying put, a change in the air hits EP, Maple Grove satisfaction and Mississippi 8 represents. 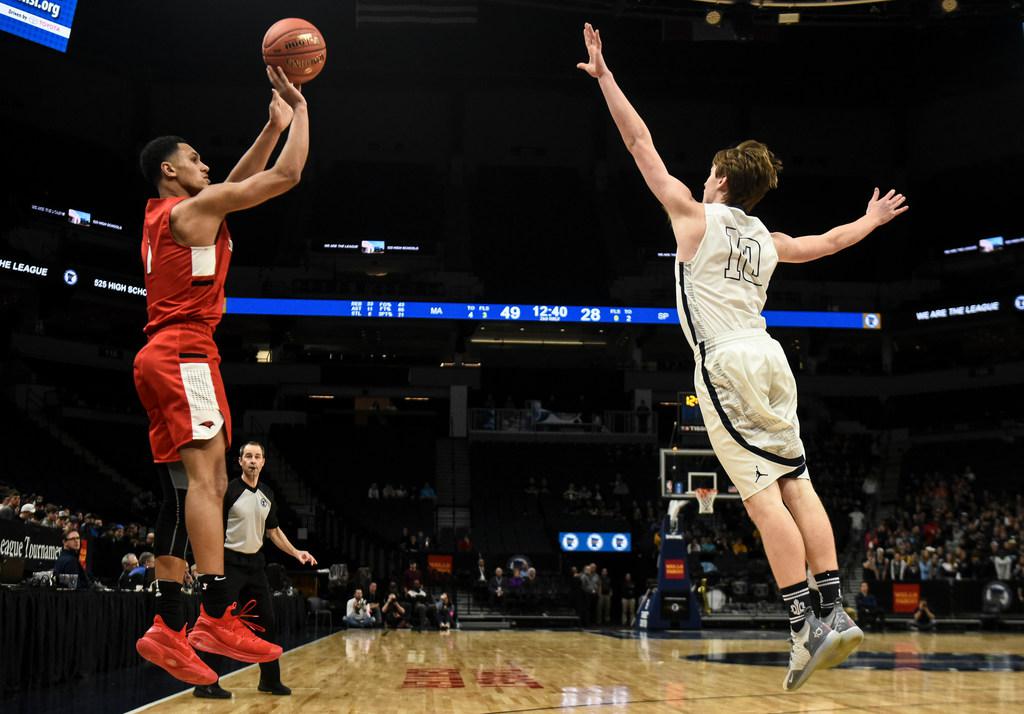 Minnehaha Academy guard Jalen Suggs (1), attempting a 3-pointer against St. Peter, supports the school's bid to move up to Class 3A, saying it will give the Redhawks a chance to counter their critics. Photo: Aaron Lavinsky ¥ aaron.lavinsky@startribune.co

Minnehaha Academy has applied to the Minnesota State High School League to move up to Class 3A next season for boys’ basketball.

The girls’ basketball program at the Minneapolis private school would remain in Class 2A.

“We kicked around the idea of the girls moving up, too,” Minnehaha Academy athletic director Josh Thurow said. “The boys are returning a lot of the same talent, and ready for another challenge.”

Redhawks standout junior guard Jalen Suggs was all smiles talking about the possible climb to Class 3A. Minnehaha Academy (27-2), the two-time Class 2A champion, defeated St. Peter 78-47 in the state quarterfinals Wednesday.

Suggs called it “a great move for us. It would give us a chance to silence some of our critics.”

DeLaSalle, a Catholic school in Minneapolis, earned fans and critics alike throughout its run to six consecutive Class 3A boys’ basketball state titles from 2012-17.

The latter group imploring the program to opt up to Class 4A against the largest schools in enrollment won’t find satisfaction in the coming weeks when the MSHSL solidifies class and section placements for the next two school years.

“We’re 3A for now,” Islanders coach Travis Bledsoe said. “We want to take out every 3A team possible right now and not leave any doubt. So until that mission is accomplished, we’re focused on straight 3A.

“We’ve handled every 4A team that we’ve played this year,” he said. “So they can come down to 3A if they really want to.”

Eden Prairie coach David Flom leaned against a wall after the Eagles’ 73-48 loss to Lakeville North and shook his head.

Flom wasn’t making excuses, but said part of the problem was going from the raucous atmosphere of playing in high school gyms to the large, open spaces of Target Center.

“It’s two dramatically different places,” he said. “Our energy was fine, but it’s a whole different atmosphere. This wasn’t anything I anticipated.”

Despite losing to top seed Park Center in the first round, Maple Grove coach Nick Schroeder never felt like his team was an underdog. Park Center had the talent edge, but to Schroeder, the Crimson had something just as important.

“We don’t have the big-time college player, but the foundation of our team is guys willing to lay themselves on the line for each other, share the ball and take responsibility,” Schroeder said.

“When you can get that, you have the foundation of a winning team, regardless of who’s going where. A lot of people wrote us off at the start of the season, but I wasn’t surprised to see us accomplish what we did.”

The Mississippi 8 Conference has three teams in the state tournament — Princeton and Monticello in Class 3A and Cambridge-Isanti in Class 4A.

Monticello rebounded from a slump over the final month of the regular season to win the Class 3A, Section 5 title.

The Magic lost seven of their final eight regular-season games before defeating Rocori, Willmar and Big Lake in its section tournament.

Monticello brought a 14-15 record into the state tournament.