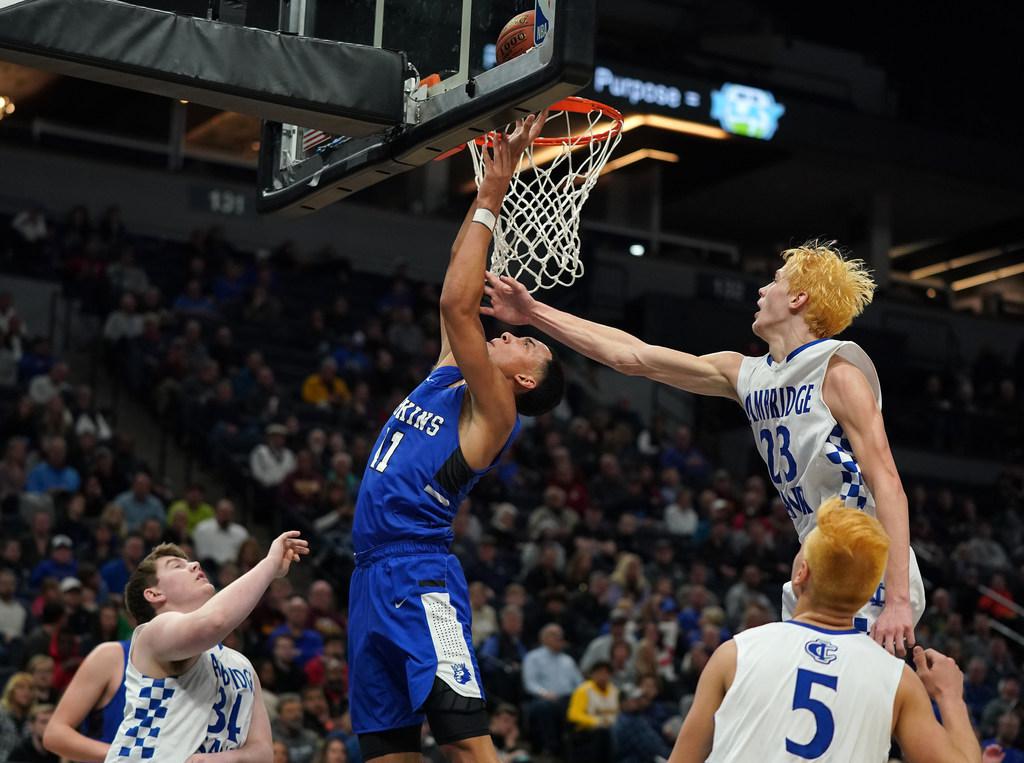 Hopkins forward Andy Stafford (11) went up for a basket as Cambridge-Isanti forward Austin Chromy (23) leapt to defend in the first half. Photo: ANTHONY SOUFFLE • anthony.souffle@startribune.com

Hopkins forward Zeke Nnaji and coach Ken Novak Jr. knew their team was, on paper, better than their quarterfinal opponent, Cambridge-Isanti. The important thing was making sure the team didn’t do anything that could spur an upset.

The Royals did what they had to do, dominating the boards, getting good shots and playing with energy en route to an 86-53 victory Wednesday at Target Center.

“We knew that if we come out slow and take them lightly, they could beat us,” said Nnaji, who led the team with 25 points. “We were a little concerned because we struggle with teams that have five guys who can shoot the ball.”

Novak’s message was simply about how his team played the game. “I said I don’t care if you win or lose, just play every possession,” Novak said. “The process is everything. If you want to be good, you have to put the work in, play the possession itself and good things can happen.”

Cambridge-Isanti coach Mike McDonald acknowledged that things would have had to fall into place perfectly for the Bluejackets (17-12) to have a shot at winning.

“Honestly, we thought we probably have to make 14, 15 threes to hang in there,” McDonald said. “The window had a little bit of an opening, but it wasn’t much. We would have had to play close to perfect against this team.”

Henry Abraham made five three-pointers and the Bluejackets, who entered the game with 350 three pointers made this season, made 11 as a team, setting a new state record for a single season with 361. The previous record was 360, set by Pine City last year.

Zeke Nnaji scored 25 points, Kerwin Walton had 19 and Dane Zimmer 15 for the second-seeded Royals (25-4), who outrebounded the smaller Bluejackets 43-15 in the Class 4A quarterfinal.