Three things to know heading into the state tournament. 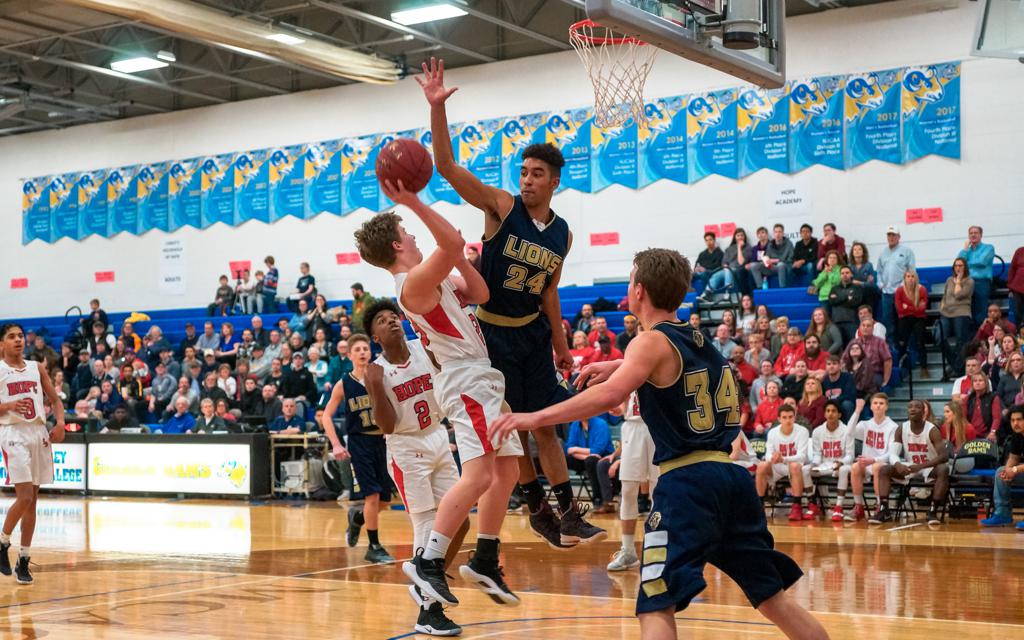 McCaleb Alleman (24), right, a CHOF senior forward, defends against Hope Academy as his brother Preston Alleman (34) looks on in the Class 1A, Section 4 championship game on March 15. Photo by Korey McDermott, SportsEngine

Christ’s Household of Faith is a family matter, with plenty of relatives on the team. There are three sets of brothers —Abel and McCaleb Alleman, Nick and Sam Otten, and Arren and Erik Strandlund. The Allemans are cousins to Preston Alleman and, Brady and Clay Bluhm. The Bluhms are cousins, as are August and Drake Eckman and Isaac Collins and Preston Alleman. Lastly, Gideon Scheeler is coach James Scheeler’s son.

Minnesota Basketball News’ final regular season top 10 fell victim to March Madness upsets in section play. Only one team in the top five, No. 2-ranked Springfield (27-2), advanced to the state tournament. Three others in the eight-team field were in the final top 10, including No. 6 North Woods (27-2), No. 7 Henning (28-1) and No. 8 Ada-Borup/Norman County West (28-1). Springfield won the Class 1A title in 2011, while North Woods was the runner-up each of the past two seasons.

Tigers senior guard Isaac Fink is one of the five finalists for Mr. Basketball and a finalist for the Bob McDonald Award. Fink averages 31.5 points and 11.8 rebounds per game. He became the 11th boys’ player in state history to score 3,000 career points. He also has grabbed over 1,000 career rebounds. Fink plans on playing both basketball and baseball in college at Division II Augustana in Sioux Falls, S.D.