The Pirates, shooting nearly 67 percent from the floor, never trailed en route to a 77-56 victory in the first Class 4A quarterfinal. 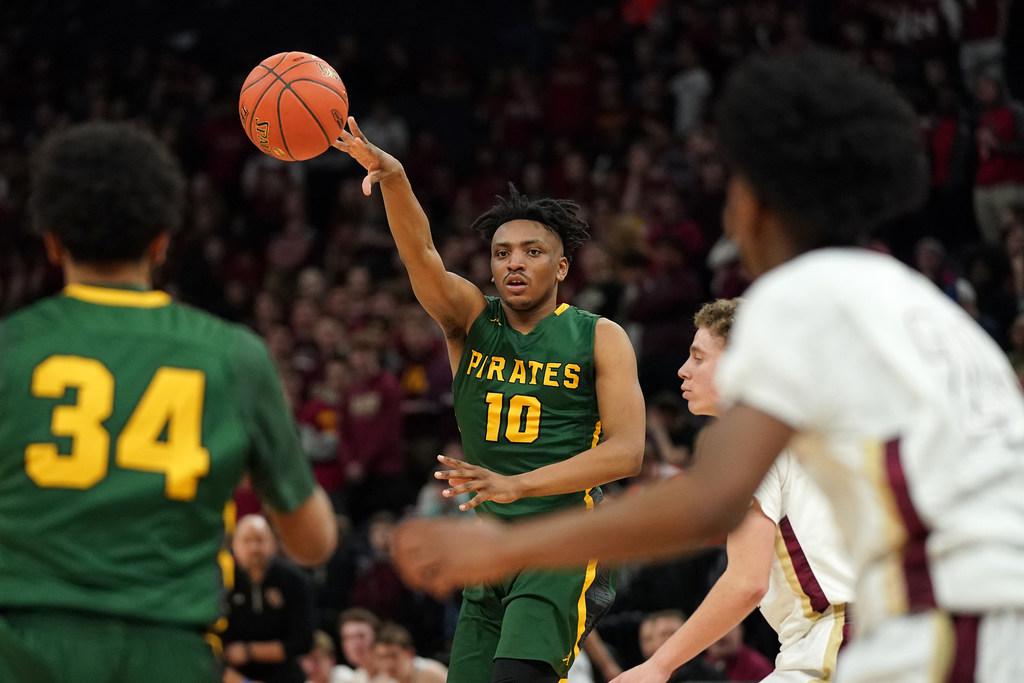 Park Center coach James Ware knew the potential pitfalls of a state tournament game in Target Center, with its NBA-length floor, deeper three-point line and massive depth behind the baskets, having experienced them when he played for Hopkins.

So he arranged for his team to practice at Anoka-Ramsey Community College, where the team could adapt to some of the differences.

“They have the longer court, so we could get used to that,” Ware said. “And we taped a fake NBA three-point-line on the floor so that our guys didn’t come down and start hoisting NBA threes. When I played here a long time ago, my first couple shots were air balls because I was shooting from the longer line.”

It paid off Wednesday in the Pirates’ 77-56 victory over Maple Grove in the Class 4A quarterfinals.

The No. 1-seeded Park Center (29-1) was unfazed by the bigger stage, jumping out to a 5-0 lead and never trailing. Behind senior guard Khari Broadway’s 7-for-7 field goal shooting, the Pirates shot 66.7 percent from the floor.

"One of the things that helps us is we like layups,” Ware said. “A lot of our actions are for us to get to the basket. The result is that we got comfortable.”

Broadway, who finished with 19 points, said his team’s style, coupled with Ware’s attention to detail, made for a more relaxed environment for the Pirates.

“Coach Ware prepared us so well, we could just come out and do what we do best,” he said.

Clearly the cavernous Target Center, with its large dimensions that have played havoc with many previous state tournament teams' ability to shoot the ball, was not a factor for No. 1-seeded Park Center.

The Pirates never trailed Wednesday en route to a 77-56 victory over intradistrict rival Maple Grove in the first Class 4A quarterfinal.

Park Center (29-1) shot better from the floor, 66.7 percent, than from the free-throw-line, 58.8 percent. Khari Broadway was 7-for-7 on field goal attempts and finished with a team-high 20 points. Dain Dainja added 16 points and 10 rebounds.