Bennett Otto and the Rebels pushed the contest into overtime and extended their winning streak over the Crimson to nine. 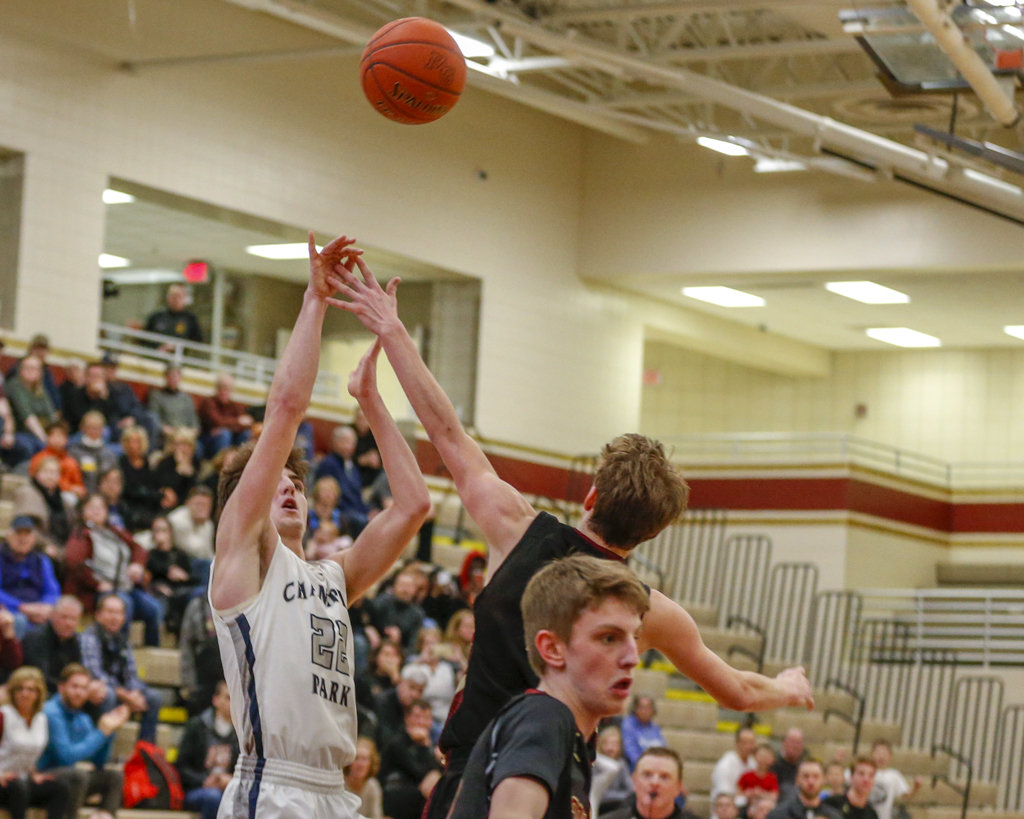 Champlin Park's Bennett Otto puts up the game-winning shot in overtime against Maple Grove Wednesday night. The Rebels prevailed 69-67 over the Crimson in Maple Grove. Photo by Jeff Lawler, SportsEngine

Maple Grove’s six seniors were honored on the court before pre-game warmups Wednesday, recognizing their final regular season home game. While a few of them had a major impact on the game, it was a senior from Champlin Park that turned a special night into heartbreak for those six — and everyone wearing crimson and gold in the gym.

With less than 10 seconds remaining in overtime, following a missed Maple Grove shot, Champlin Park’s Bennett Otto brought the ball up the floor.

“I knew we were in the bonus, so I wanted to get something going to the basket,” Otto said.

Otto drove hard to his right, creating some contact. He executed a lethal jump-stop and pulled up on the right elbow and buried the go-ahead shot with 2.3 seconds left.

It was all Champlin Park needed in a 69-67 come-from-behind overtime win at Maple Grove.

“He kind of stopped my first penetration, so I jump-stopped and just kind of rose over him and shot a jump shot and it went in,” he said.

Otto said the shot was the “best one I’ve ever had.” On the ensuing inbound play, he played safety to pick off the inbound pass and extend the Rebels’ (20-5, 12-0) win streak to eight games.

Otto will get the headline for a team-high 19 points and the game-winning shot, but it was Champlin Park’s defense that helped get the game to overtime and eventually secure the win. In the final five minutes of the game, the Rebels held the Crimson (19-6, 9-3) to nine points and forced them take three timeouts. Alex John, the Rebels’ blocks leader, watched from the sideline after fouling out with about three minutes left in regulation.

“It was tricky because we were in foul trouble a lot of the game – having a starter on the bench in overtime – and we were still able to kind of play our aggressive defense,” Champlin Park coach Mark Tuchscherer said. “We did a nice job of playing solid team defense without fouling down the stretch.”

Francis Nwaokorie’s stellar play alleviated some of the headache that came with the loss of John. The sophomore had 17 points and six rebounds off the bench, with 15 of those points coming in the second half and overtime. Tuchscherer said Nwaokorie has been big for the Rebels all season, but he really “stepped up tonight.”

“He’s a great player…if he gets the ball in the paint he makes good decisions. He’s a good passer and tonight he finished,” Tuchscherer said.

The Crimson had to deal with their own adversity as Nate Adams had to leave the game with a hip injury. Adams had 18 points and was a key for the Crimson offense, as he stretched the floor with his five made 3-pointers. His absence put a halt to the offensive production and it started to burn out toward the end of regulation.

“I would’ve liked to see our guys a little bit more confident with the ball and turning the corner and attacking the lane,” Maple Grove coach Nick Schroeder said. “We got a little tentative with it, kind of started to stand and watch. Things we were having success with early we stopped doing towards the end of the game.”

Both coaches emphasized that Wednesday’s contest is the type of game they want their teams to be playing in with sections right around the corner.

“Any game, win or lose, there should be something to learn from it, it just seems to be when you lose you focus on things a little bit more. As long as we are mature enough to learn from what we did well and what we did poorly, I think this game is a success either way,” Schroeder said. 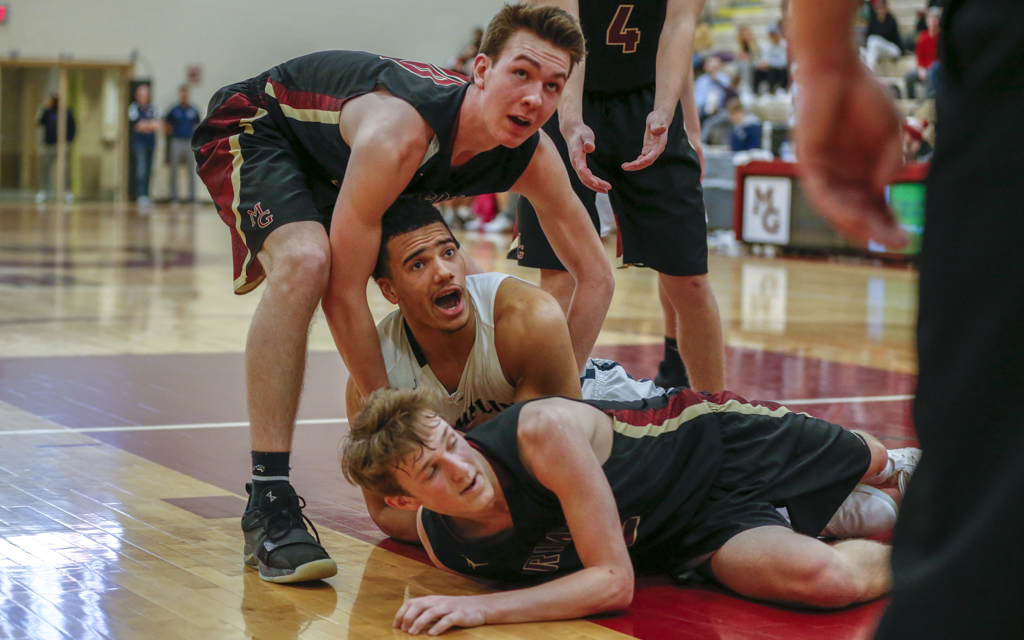 Champlin Park's Alex John looks for help from an official on a loose ball against Maple Grove. John had nine points for the Rebels despite fouling out late in the second half. Photo by Jeff Lawler, SportsEngine

Champlin Park outlasted Maple Grove 69-67 in an overtime thriller Wednesday, as the Rebels went on the road to pick up their eighth win in a row.

With just under 10 seconds left in overtime and tied at 67, Rebels’ senior Bennet Otto got the ball in his hands and had a one-on-one matchup with a Crimson defender. Otto drove to his right and pulled up from about eight feet, creating just enough space to get a shot off. He buried the jumper to put the Rebels up two with 2.3 seconds left.

Otto finished the game by picking off the long-inbound pass attempt to secure the Rebels’ ninth straight win over the Crimson (19-6, 9-3).

Kato Seley helped send the game into the extra session after he got a layup late in regulation to tie the game at 58. The Rebels (20-5, 12-0) shut down the Crimson and didn’t let them get a shot off, forcing the game to an extra frame.

Otto led the Rebels with 19 points and added four steals on the defensive end. Francis Nwaokorie came off the bench to score 17 points and pull down six rebounds.

The Crimson got solid contributions from three of their guards. Jared Rainey (19 points), Nate Adams (18) and Kyle Dreyer (17) combined to score 54 of the Crimson’s 67 points. 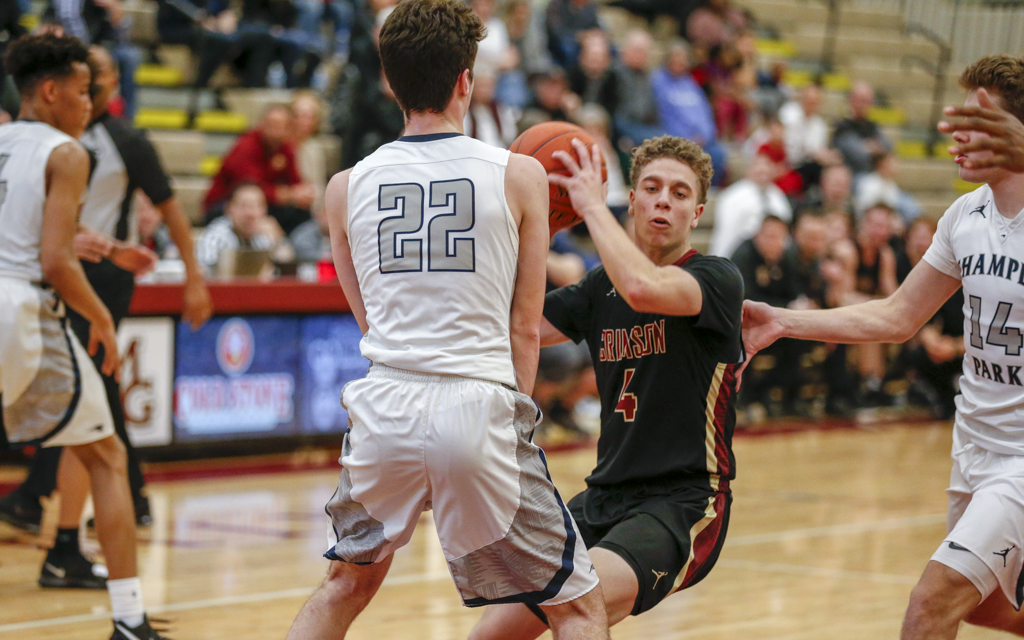 Maple Grove's Jared Rainey looks for a path to the basket against the Champlin Park defense Wednesday night. Rainey had 19 points for the Crimson in their 69-67 overtime loss to the Rebels. Photo by Jeff Lawler, SportsEngine