Tyler Wahl's 21 points and 10 rebounds led the Panthers, who completed the season-series sweep of the Lakers. 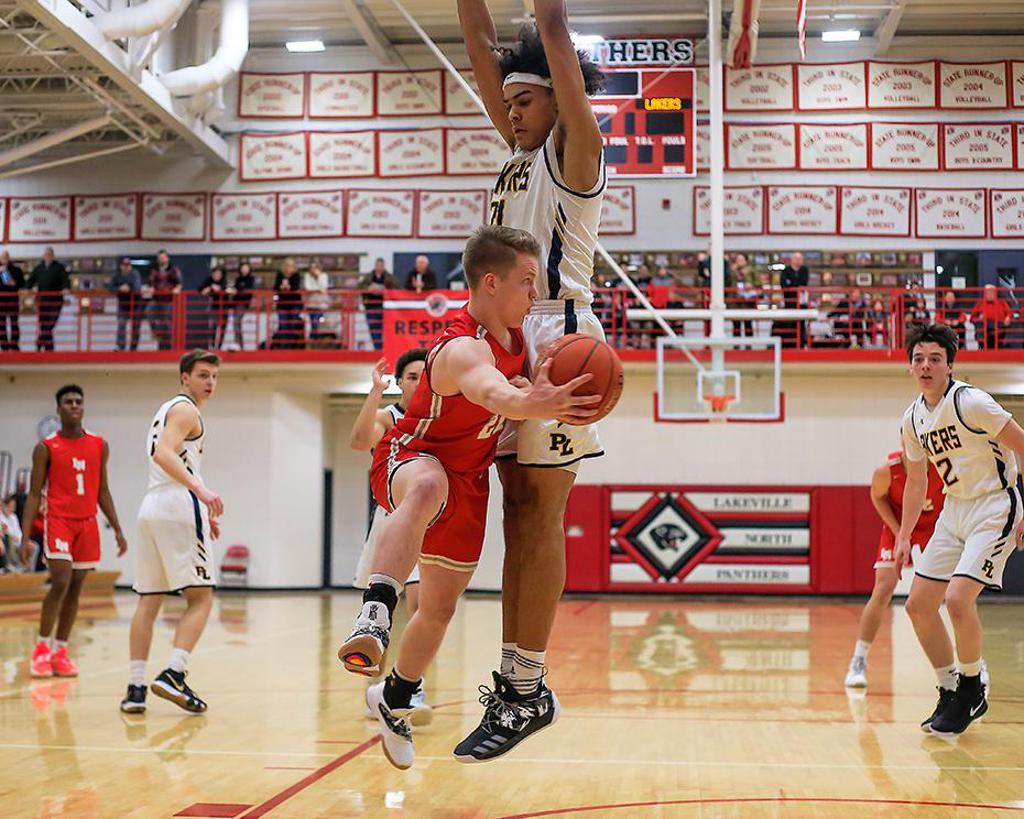 Tommy Jensen reached around Prior Lake's Robert Jones to make a pass in the first half of Lakeville North's 77-63 victory. Photo by Mark Hvidsten, SportsEngine 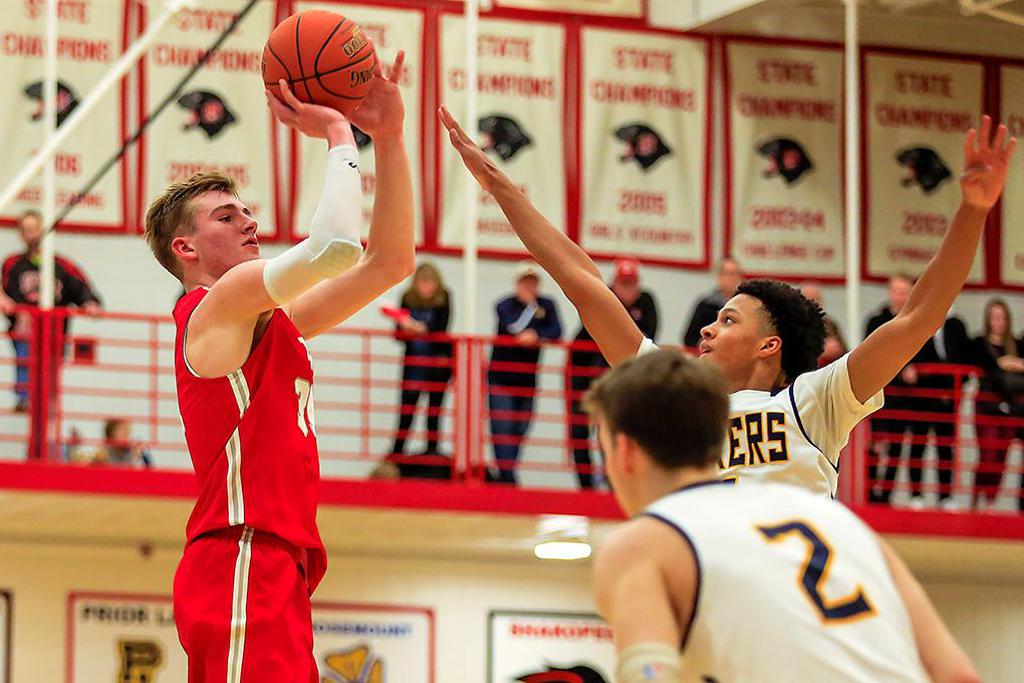 When Lakeville North went up against Prior Lake the first time on Jan. 22, senior guard Tyler Wahl found himself often in the post going up against Lakers’ big man, Dawson Garcia.

But when the two teams met on Friday, Wahl brought the ball up the floor and found himself near the perimeter. 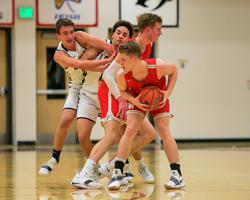 Wherever Wahl has been, he’s been a catalyst for Lakeville North. After scoring 22 points in the Panthers’ 77-68 win on Jan. 22, the University of Wisconsin commit put up 21 points and grabbed 10 rebounds on Friday. His contributions led Lakeville North to a 77-63 win over Prior Lake.

At 6-foot-7, Wahl has spent the majority of his basketball career in the paint for Lakeville North (20-4, 15-1). But in the past year, Wahl has discovered some newfound versatility. This past summer, Wahl worked on playing point guard when he played American Athletic Union (AAU) basketball with D1 Minnesota Basketball.

Wahl had a chance to play more in the backcourt against Prior Lake because of the Lakers’ injury issues. Prior Lake, ranked No. 2 in Class 4A by Minnesota Basketball News, has played a month now without Garcia, averaging a team-best 27.5 points per game, due to a leg injury. Senior forward Carson Schoeller was also wearing a walking boot on Friday.

With those big men out, Prior Lake (21-3, 14-2) has one option in the middle – senior center Robert Jones. On Friday, Jones, a Denver University commit, was guarded by Lakeville North senior twin forwards Eli and Will Mostaert. The Mostaerts, who starred on the defensive line for the Panthers’ state championship football team, brought their football physicality to the middle and made life tough for Jones.

“It’s huge to have them physically,” Lakeville North coach John Oxton said. “They battle. It’s cool that they’re big football stars and still come out and play basketball for us. They’re a big part of our team.”

For much of Friday’s game, the No. 5-4A Panthers held the lead. Wahl helped lead the way with 8 points in the first half. But Prior Lake pushed back in the second half. Jones had 13 second-half points to finish with a team-high 19. The Lakers also utilized their shooters, including senior guard Sam Nisson, who knocked down three three-pointers in the first half.

“Not having (Garcia) is a huge blow,” Oxton said. “But they do become very athletic.”

But Prior Lake could not ultimately keep up with Lakeville North. Wahl got the Panthers started on a 7-0 run in the early minutes of the second half after he knocked down a 3-pointer and dunk. He continued to control things offensively and finished with 21 points. It was a performance the injured-Lakers could not match.

“Hats off to Prior Lake,” Oxton said. “They have those injuries but they’re still playing extremely well.”

With the win, the Panthers put themselves in the driver’s seat in the race to capture the South Suburban Conference championship. Much of that success can be lent to Wahl. Though he’s not the first Lakeville North player in recent years to go to the Division-I level, Wahl’s unique versatility makes him stick out.

“We’ve never had a guy with this much versatility,” Oxton said. “He can do everything.”

In a battle of South Suburban Conference heavyweights, Lakeville North packed more of a punch Friday, defeating Prior Lake 77-63 at Lakeville North High School and completing a regular-season sweep against the Lakers.

Lakeville North (20-4, 15-1) was led by senior guard Tyler Wahl, a Wisconsin commit and a semifinalist for both the McDonald and Mr. Basketball awards, finished with a game-high 21 points and 10 rebounds.

Wahl was one of three Lakeville North players to score in double figures for the Panthers, ranked No. 5 in Class 4A by Minnesota Basketball News. Senior forwards Eli Mostaert and Jack Rusch had 12 and 11 points, respectively.

The No. 2-4A Lakers came into this matchup without their top scorers, junior forward Dawson Garcia and senior forward Carson Schoeller. Both missed Friday’s game due to leg injuries.

Senior center Robert Jones led the way for Prior Lake (21-3, 14-2) with 19 points and 14 rebounds. Senior guard Sam Nissen was the only other Laker in double figures, finishing with 16 points after hitting three 3-pointers in the first half. 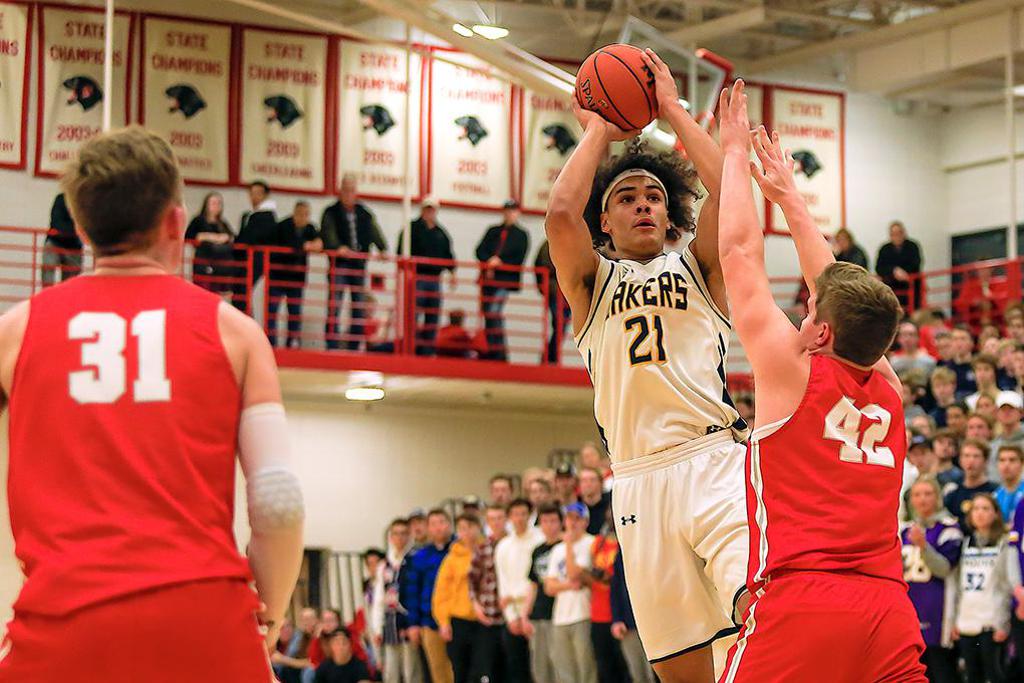 Robert Jones (21) paced Prior Lake with 19 points. He took this shot over the Panthers' Eli Mostaert. Photo by Mark Hvidsten, SportsEngine